Ben Schwab got down for the ONE cameras to bang out his interview in Issue #3, and we’ve got an excerpt from the interview and a few clips that show how it all went down. Check it out! 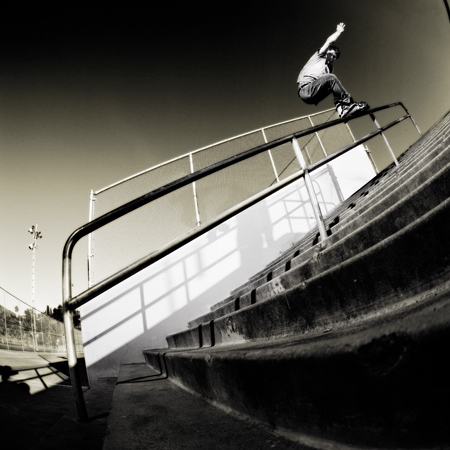 ONE: Alright, Ben, now this is a big question and I want you to answer it honestly. Who is Ben Schwab?

BS: (Laughing.) Ben Schwab is a 20-year-old skater who moved out to California from the Midwest, who goes to school, works, skates and does everything someone else would do who’s 20 years old.

That was a lot more concise than I had imagined, and you did a good job hitting a couple questions I had, but I’m going to hit them anyway.

So you’re from Ohio and you moved to California. Tell us about growing up. You grew up somewhere Midwestern-ish?

Yeah, basically I spent ages 10-17 – until I graduated high school – here in Ohio, then as soon as I graduated I left. I wanted to go back to the West Coast, ‘cause that’s where I’m from.

Did you start skating in California or Ohio?

I got into skating when I was about 12-years-old because, actually, Omar Wysong – who you guys all know, I’m sure – kind of had this scene here, and I met them through my brother and a couple of the guys, and I’ve been skating ever since then … even all of them quit.

I heard Omar is starting in plays now.

That’s what I hear, too.

I’m from northeastern Ohio and I remember when Omar starting coming to Am Jams and stuff. There used to be a rumor that there were two twin brothers in southern Ohio – and maybe it was the Bartons – but I think it was you and your brother, and the rumor was that Dustin skated with you guys and called one of you “the one.” Is that true?

That’s what I heard. That Dustin was on a tour – skated with you guys – then went around telling people he had met “the one.”

Maybe that was just a Midwestern rumor.

I actually don’t think I heard that, but I do remember Dustin coming through town. And, you know, it was a biggest fucking deal ever because that was around the time Dustin was at his prime. I never heard that, but Dustin has always been my inspiration. I always looked up to him and still do now.

It’s definitely a high compliment. I always wondered if it were true. The going back to the West Coast, was it about skating or for other reasons?

Well, it’s more than that. It was really for me, like, I had to fight through high school here. It’s not … I’m from this small town here where people are … for the most part they are into the same kind of things and think the same normal kind of ways, and I was over the whole scene. I wanted to get away. I remember from freshmen year saying to myself, “After high school I’m out of here.” I wanted to get away and see what else was out there.

You do know how much of a twist on “Airborne,” don’t you? Especially given that you’re down in the Cincinnati area.

(Laughing.) I was talking about that today, actually!

You’re such a Mitch. That was the guy, right?

Read the rest of Ben’s interview in ONE V2N1.