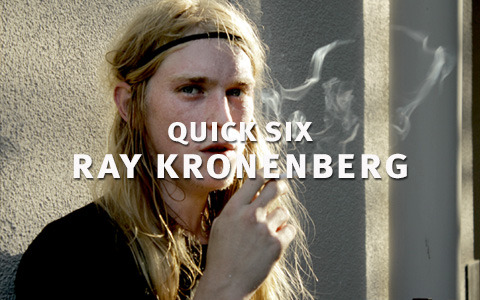 Written by ONE Staff - Published on Wednesday, October 1st, 2014

To be honest, interviewing Ray was much harder than I thought it would be. I lived with this kid for a year, been on countless blade trips, blazed it, boozed it, porched it, skated and talked for hours, so asking him six questions about blading over a computer felt a little silly to say the least. The original game plan was kick it with some brews and homies, record some real conversation, type it out and be done. But after four long weekends of skating, weddings, contests, partying, injuries and more partying, we came up short. Although I had nothing written down at the end, I felt I had gained a new appreciation for the man through the conversations we shared over the weeks. Ray is stepping up in all aspects of life. The dude has been crushing on the blades, built his own house, got back in school, taught himself how to shred on the bass, learned to film and is now working on some new blading projects. Bottom line: Ray is one of the best homies I know and put simply, “The man can skate.” Best of luck with the healing process amigo, looking forward to blading alongside you soon! Cheers, player… — Julian Mire

I’m pretty juiced to be interviewing you, but before we get lyrical on these fools, for those who are unaware, can you let them know who are? Years skating, age, basic info, what you are doing right now, and really anything else you wanna throw in.
My name is Ray Kronenberg. I’m 20 years old. I’ve been skating since ’99. My mom took my brother and me down to the Sanctuary skatepark in Chattanooga early in ’99 and bought us skateboards. After two months, the dude who ran the shop told me I should get blades. So at 6 I got a pair of Swindlers, and I’ve kept blading since. I grew up skating with Michael Braud and Josh Hayes (look out for that dude). I ride for Razors, but more specifically the Cult team, which consists of a bunch of rad new up and comers that I’m super stoked about. I film on a Vx1000, sometimes Vx2000, for Possessed, which is a media entity in which myself and all my homies skate, film and party for. I’m now a full-time college student at the University of Tennessee at Chattanooga, which is a major turn around from working construction 9-5 and pizza flippin’ for the last three years since I graduated high school. 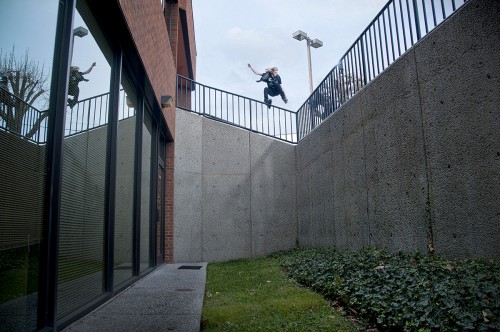 What’s up with the Rumwizard? Even though I already know the story, I’m pretty sure some are curious out there among the masses.
My buddy Josh Hayes, who is a ripper from Chattanooga and one of my skate mentors that now resides in Denver, was getting married. So I get off the plane, greeted by a massive spliff from all the homies and a bottle of rum from Michael Braud (Gumby). Gumby and I started on the bottle because the stresses of plane travel had gotten to me… and our boy was getting hitched. We had nowhere to stay and less motivation to find a proper bed to sleep in. So half the bottle later we found ourselves driving down back roads in bumble fuck Montana looking for a good spot to sleep with no tents or sleeping bags. This search consisted of more spliffs and riding on top of the car without the drivers’ permission. We finally found a construction site hidden on the beach of a mysterious swamp. We set up camp, which meant we parked our car. By the end of the night the bottle was gone, we’d found a death chamber in the house we were staying next to, and me and Howie Bennett decided we would crash on the dock of the swamp. In the middle of the night, sleepwalking or going to take a piss, I ended up in the swamp. I swam farther and farther out in my blackout foolery thinking I was swimming to the shore and flapped around till dawn waiting to be rescued. Howie found me in the morning asking “what were you doing out there Ray?” With a blank stare I replied “You’ve been out here this whole time and you haven’t done anything.” I was still blackout drunk in the morning but I survived that mysterious swamp and they all said that it gave me magical powers. So they started calling me “Rumwizard.”

So back in December we were at a contest down in Atlanta and the homie Gumby gave you a vx2000. How sick was that for you? Got any plans for it? And as a side note, what was it like coming up under Gumby, especially in a small scene like Chattanooga? You could also talk about using Taylor’s 1k (vx1000). And since you have both, 1k or 2k?
The Vx2000 that I won for “Most Metal Award” at the Dirty Stank competition is now in the possession of Quinton Lamb on the hopes that he will get his fixed someday, which he and Zach Tierce seem reluctant to do considering one fell into their lap. It’s the new Possessed camera, along with the Vx1000 that I bought from Taylor. We plan on bringing you all a bunch of new content. Having Gumby, my homie and skate mentor, straight up give me a camera is a big responsibility. So as of right now that responsibility lies on Quinton going out and sticking that thing at some homies skates. On a side note, I filmed a section for Gumby once upon a time that still hasn’t come out due to him moving away to Cali and missing a few clips but I just want everyone to know it’s probably my best section ever but it’s hard meeting the devil’s quota. Five clips a day. 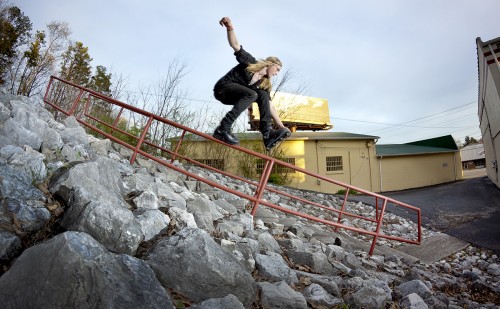 Since you’ve had the VX, you have really stepped it up in the filming department, and people are starting to notice. How has stepping behind the lens changed your appreciation for filming? And how critical is the flimer/skater combination (relationship) to you?
My whole life my brother skateboarded so I always watched skateboard videos, which compared to most blading videos, they plainly just did things professionally. This means that clips to me are filmed on the VX. Always have been always will be. So now that’s out of the way. I have no problem with HVX footy, I just cant afford that. The relationship between skating and filming and the skater and the filmer is so crucial. I look at skating differently now that I film — doing less so that the clip can be filmed better is what I’m all about. This does not mean I’m going to soul-grind everything. I’m just saying that simplicity or little nuances are easier to show when you and the filmer both know what you’re doing and how you’re gonna do it. I always try to create a relationship with people I’m filming which isn’t hard because everyone I film are all my homies. I know how everyone skates and I’m confident I can get close to them. Skating is different. When im skating I have to make sure someone I trust is behind the lens. First person to show that was Gumby, in that hidden section that is still going to come out some day. The next and most important was Taylor Popham. I visited Nashville while Taylor was filming for his UFO edit, which if you haven’t seen — stop reading this right now and go watch it Right Now. It is my inspiration. The song is perfect, the editing is flawless, skating for it was the most fun I’ve ever had, and of course he kills it with the Vx. But we started to form a relationship, I knew I could get buck and I knew that it would look sick. I trusted him and it ended up he needed some gaps in his edit. So it worked out perfectly. Then he told me he was filming a video so I moved up to Nashville and we started filming for the first video Possessed ever made Meet your Maker. Just on a side note, another person who really kills it when I’m getting clips with them is David Sizemore. I got some footy with him and damn that boy is a filming inspiration. I fully trust that dude, and will get very buck if he is behind the lens.

When I first went down to Chattanooga to interview you, we met up at the skate park and you ended up hurting your knee, then at KY battle you were rocking the cane. How’s the knee and what’s the game plan while your recovering?
I just had surgery on my meniscus. It’s a work in progress. Rehabilitation is all I can think about right now other than school. Can’t wait to be back on the blades. 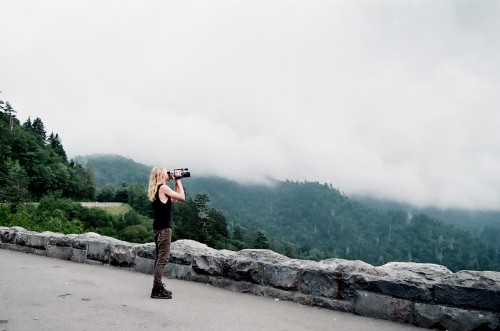 You have bladed longer than I have for sure. What’s the sickest thing that happened or the most rad moment you can recall from blading?
Growing up blading in the south is a hard road. Little recognition, fewer homies, worse spots. But through the rivers of shit we found out that southern blading has been super influential. Regardless, I’ve been blading a long time with a lot of good homies, and I can’t make out one moment that’s been much better than others. I haven’t always been the most involved. I only started going to all the events over the past five years, I was mainly a hometown blader working on technique but it’s been a blast this whole time, and I’m sure it will continue.

*BONUS QUESTION*
You have probably skated across the state of Tennessee more than any of the others, so here it is: Memphis, Nashville, or Chattanooga? (Basically what do you dig about each one and where is your favorite?)
Chattanooga: Best outdoors out of the three. Great spots if you like to get buck. Nashville: Best skating in Tennessee, go there and the spots will find you. Memphis: Best Barbeque in Tennessee. Also, the headquarters of Possessed. So I frequently go visit the boys to brainstorm, chill and blade. Very chill vibes in Memphis. Gnarly spots though.

Reading this article was special for me for so many reasons. I was in the blade crew in Nashville I guess a “generation” before all these cats involved in this artical. When I was in my prime Julian Myers older brother was our crew filmer/editor, Julian didnt even show any interest in skating untill long after I had all but quit. Now he is one of the steeziest rider ive seen in years. Taylor Popham was a 3 and a half foot tall grommet with a Canon zr10. I only had the pleasure of meeting/skating with Ray a couple of times. The first he absolutely owned a contest and promptly spent the prize money on a bag of chronic. I miss skating everyday, I still try to get out to a park and roll around whenever Ican and I always try to hit up these fools when Im back home. I guess im just happy to see that the torch got past to such a skillful, chill, rad bunch of shredders. Keep it up y’all your making TN look amazing and making sure it stays an important spot on the rollerblading map.