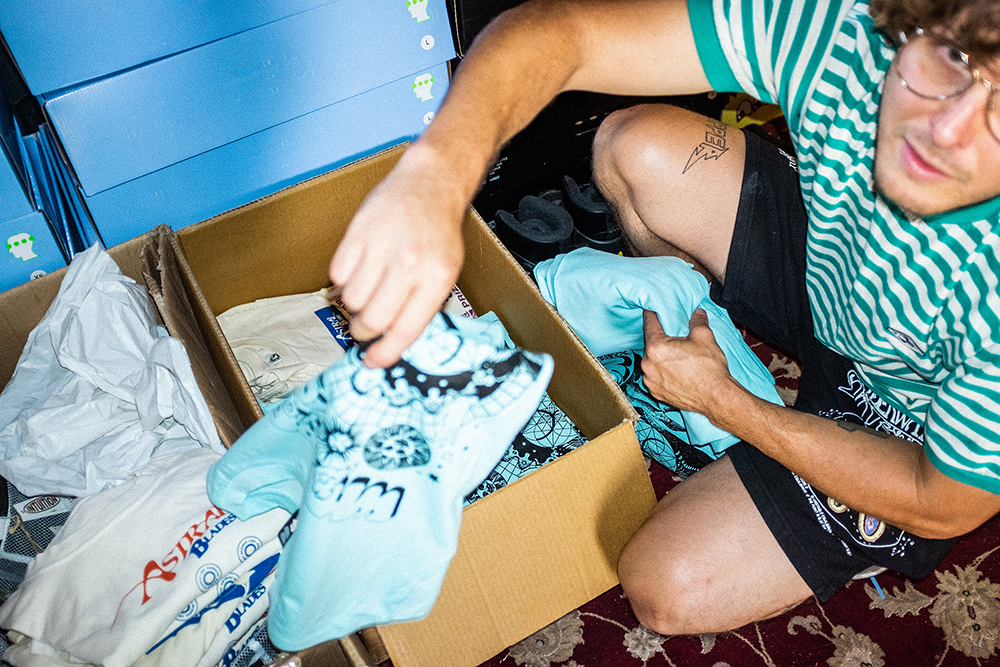 Los Angeles has a new blade retailer and event coordinating hot spot in the form of Astral Blades. This small, family-operated and blader-owned business supports similar companies within the skate community with a dedicated approach to grassroots development. Coming in fast on the scene with inventive skate events that bring together wide, diverse groups of people on wheels, Chris Rosi has a vision for what the scene needs and is taking steps to make it happen. We asked him some questions about how it all came together and he was nice enough to provide some great insight accompanied by enchanting visuals by the talented Trace Taylor, so enjoy this look at the stars with Astral.

Hi Astral Blades, thanks for starting another retail option in the LA area! That’s great! What can you tell us about the team behind the shop?
Thank you so much for the opportunity to talk about my favorite subject—Astral Blades! My wife and I are the owners of the shop and our good friend, Josh Mills, helps out in many ways. We like to call him our Chief Technology Operator.

Chris, you’ve been shredding for a long time! Tell us about your blade history.
I got into blading when playing ice hockey in Connecticut. I got my first pair of blades when I was 8 years old. They were all black Rollerblade TRS Lightnings. I got them for Christmas. I grew up on a dead-end street, along with a bunch of other kids. We mostly played street hockey at that time. Naturally, as kids, we started becoming more adventurous and would build ramps out of scrap wood to skate. I saw my friend’s older brother do a soul grind on a small 2 stair. Later that day we all watched Hoax 2. I was trying to grind immediately after that in my Roces FCO Rome skates. After high school, my friend PJ and I linked up with the Black Bandit Media crew. We would meet up every weekend in different parts of CT. I was totally obsessed with blading. When I turned 19 I moved to San Diego because of the blading community there. I posted on Be-mag that I was new in town and Kareem was the first person to respond. Then I met Hayden Ball and Derek Hall. The four of us skated almost every day. Being in San Diego at that time was amazing. I soon met and made friends with the Rat-Tail crew, and was skating and hanging out with Shima and Jon Elliot. Something that would have made my high school head explode. Around 2008 I started a band and that kinda took over my life for the next 13 years. Fast forward to lock down when I was looking for outdoor activities and decided to dig out my old skates and hit the local park which was only a mile from my house. After a few sessions I hit my old CT pals who, lucky for me, were all here in LA still skating. They invited me to a Sunday Brunch session and from there out I’ve been totally hooked. So hooked I decided to open my own skate shop.

Is there anything more you can share about the inspiration to open your own blade shop?
There is a record label called Rough Trade records that started up as a record shop in the mid-‘70s. They are pretty much responsible for the DIY punk movement. As the story goes, the Buzzcocks went into the a record shop trying to sell copies of the record they just fully produced themselves. This was the first time a band recorded, pressed, and made the record by themselves. Because they had no record label they had no way to distribute their records besides at their shows. Rough Trade bough a box of the records and sold them in the shop. This became the blue print for bands going forward. Soon after there was a whole scene of bands putting out their own records and selling them to Rough Trade. The shop became the epicenter of that scene and the only place to get these kind of records. Rough Trade then started a distribution network and started sending these bands’ records to shops all around the UK.

Later, Rough Trade started the record label and became an all-in-one stop, serving as both label and distributor. I think it’s really cool how they built such a tight nit scene and were giving the major labels a run for their money. They were also a co-op and had no type of corporate structure. They are still around today and continue to put out some of the most interesting and cutting edge music.

I was also super inspired by the skate shop I grew up going to. It was called Rynos. It had a super sick but janky mini ramp in the back and a p-rail. We would go there every day. It was the hang out spot before and after every street session. I would love to have something similar. Maybe no mini ramp but instead a cafe built into the shop. I really like the idea of having a spot that could be a hub for the community, a place where people can meet up and hang out. 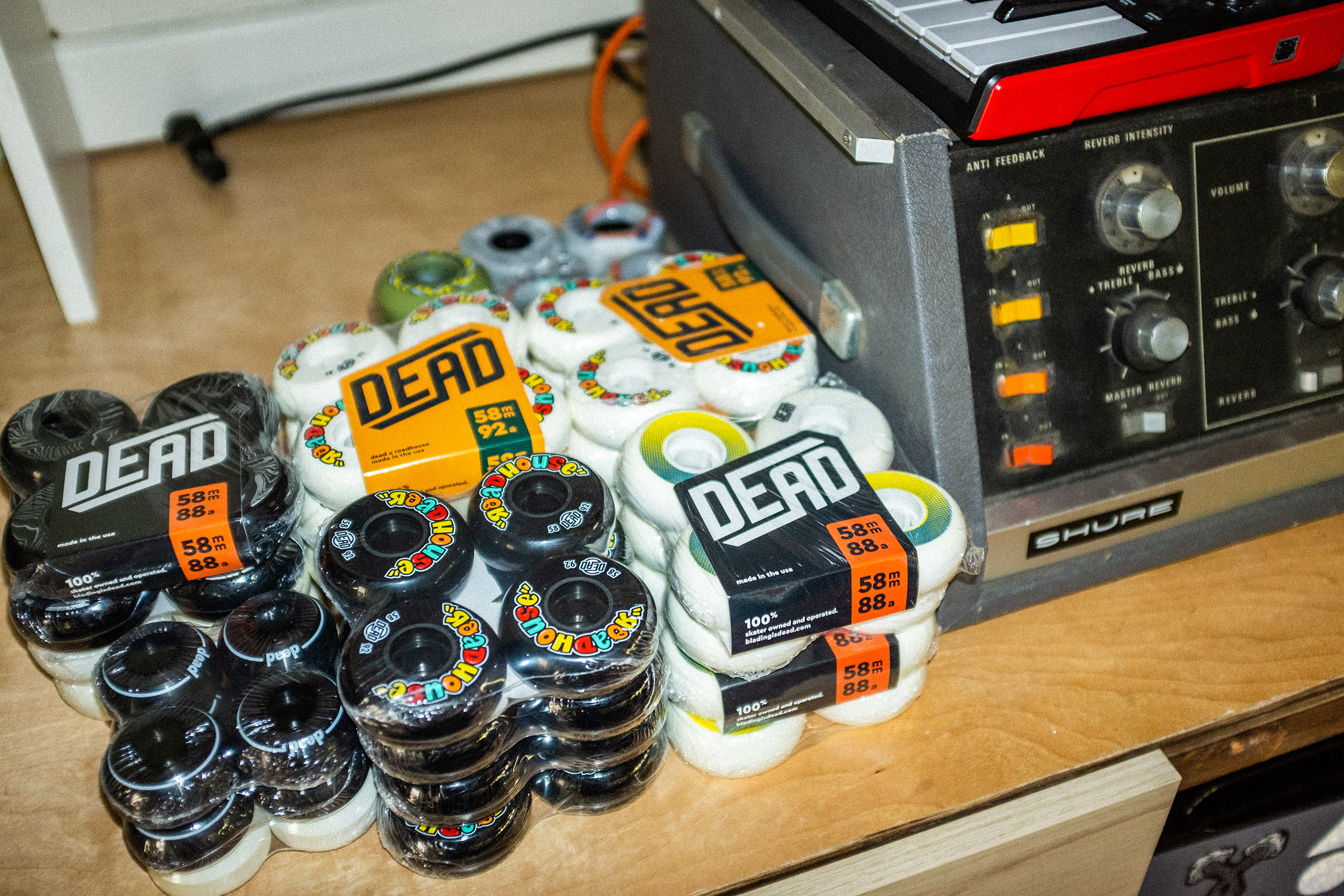 What makes Astral Blades different from other retailers?
We only carry skater owned brands. I think it’s super important to keep the money circulating within the community. Especially because the rollerblading community is so small. Right now is a really cool time in skating because there are tons of smaller niche brands that are skater owned. Anything we carry fits within our vision and brand identity, and has to feel whimsical, paying homage to the nostalgia of skating’s beginnings while looking toward the future. We want to appeal to those outside the blading community as well, to grow the existing community. We’ve also been hosting events to draw in newcomers and old timers alike.

Let’s talk about those events. You don’t just do the typical blade contest sort of thing—tell us about how you approach your events.
Our events are super important to building a community. We do a monthly meet up every first Wednesday called Astral Skate Society and welcome anyone who wants to come out. We look out for those who are new on wheels and encourage all wheels to attend. When I first started them I planned to do street rollouts where we would skate from spot to spot. The first one was the Wednesday before the fall Blading Cup, almost a year ago. We did a few rollouts in this style, then I thought it would be cool to mix it up. We did a box session at a famous LA street spot that we would later come back to hold the Curb and Flatgound comp. Since then we have done some pop up shops and most recently a street hockey game. As far as my approach to planning the events, I try to think of what would be fun to do on wheels and then just go for it. 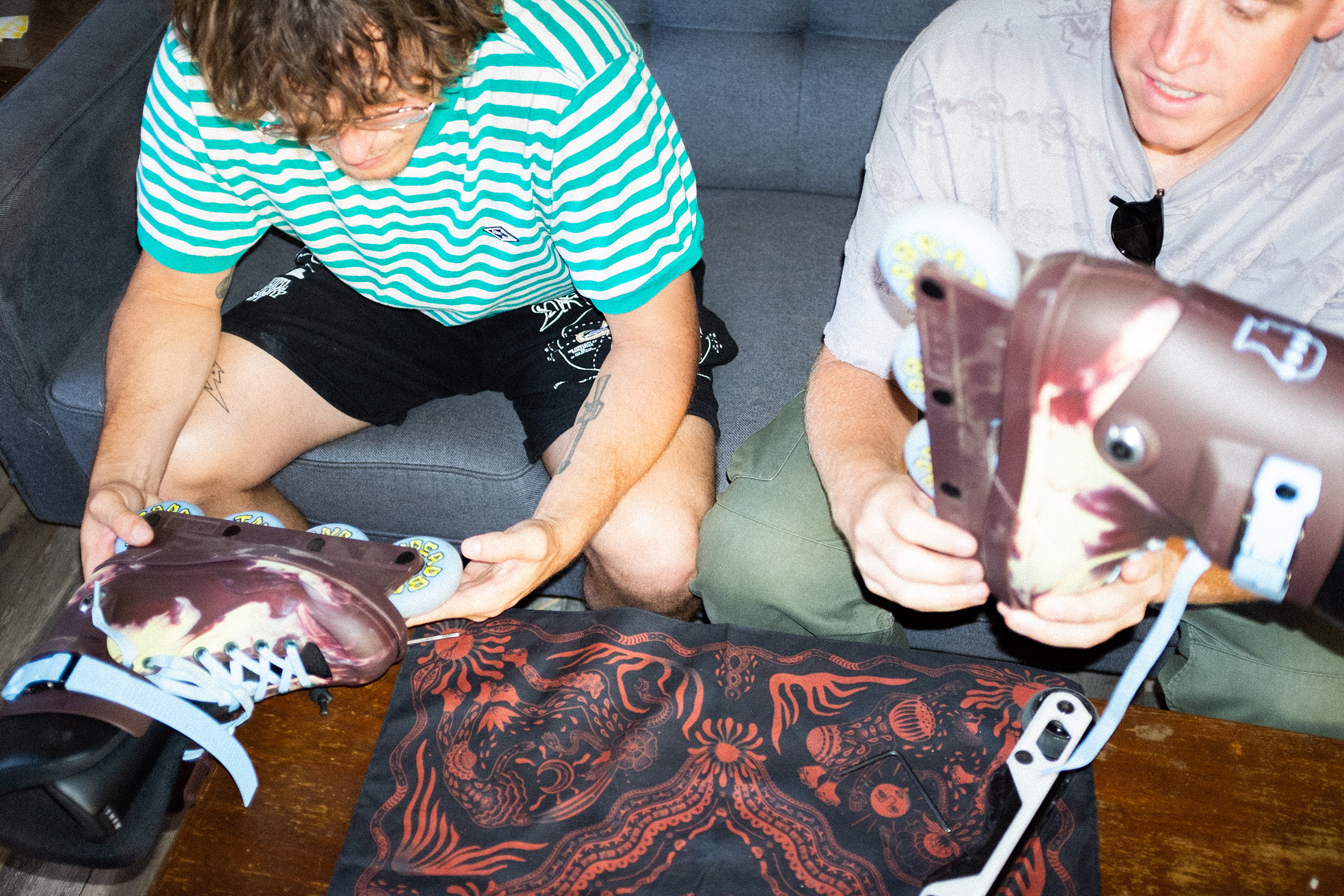 What has the reaction been like?
The events have been amazing. We typically have a super diverse group which I think is great. From beginners to pros, blades and quads. The biggest events have been the first box session and our DTLA rollout. Almost 100 skaters came out those nights. It was so sick ripping through the streets downtown with a group that big. 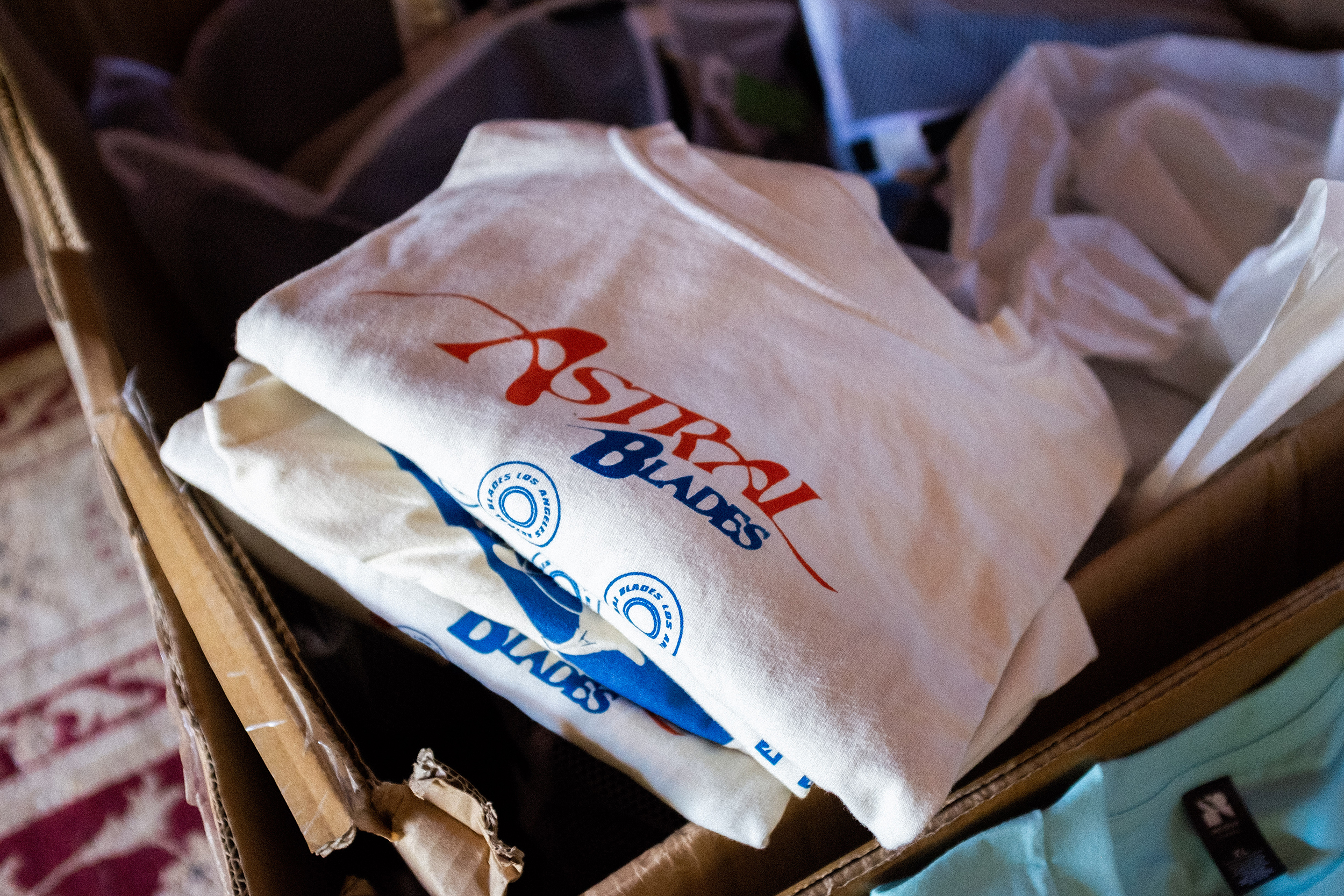 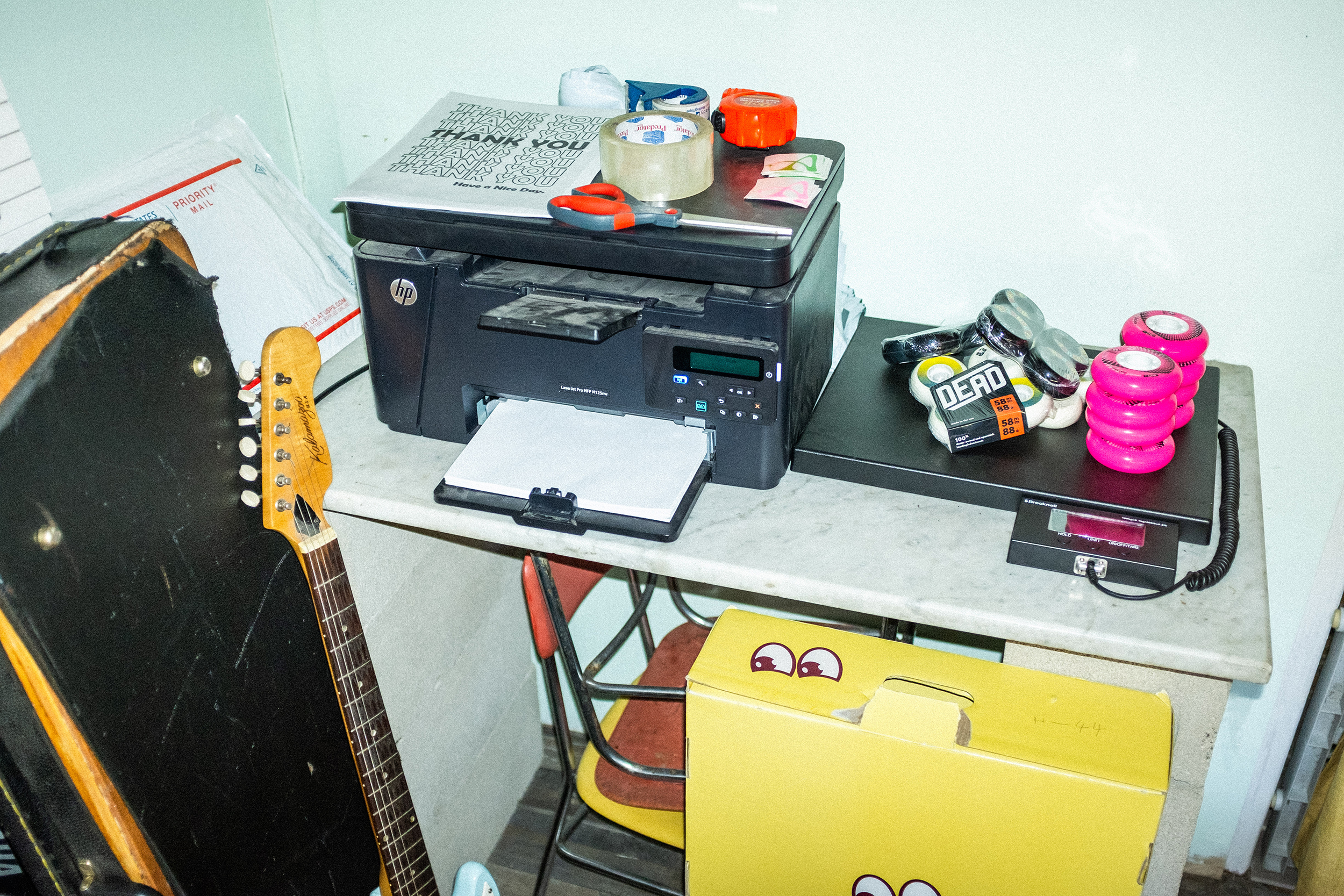 As a long time blader have you seen the public’s reaction to skating change? If so, how would you describe it?
Back in the ‘90s it was the cool thing for a few years; everybody was blading. That didn’t last long and for the next 15 years blading was ridiculed. I took a pretty long hiatus but when I started back up again in LA it seemed like the stigma was gone. I think partially because skating was so underground people kinda forgot about it, it seemed obsolete to most people. Now that there is a kinda renaissance of blading there are so many kids at the skateparks seeing blading for the first time and digging it. Skateboarders are even giving props and mingling with bladers at the parks. Even switching over to blading. It’s super exciting. Even people on the street seem genuinely interested. I’ve gotten a few hollers and “Hell yeahs” when I’ve been out cruising the streets on my 80s.

We’ve heard stories of retailers having too much inventory from the “pandemic rush” — is that something you’ve experienced as a new player in the space?
We are pretty small and operate on what most would call a shoe string budget. I stock products I think will sell out. I’m also only stocking small quantities so we luckily have not been affected.

So far what has been the best selling product for you, and what does it suggest about the blade retail space right now?
I’d say the Them 909 soul plate replacements are the top seller. They flew out of the shop. People are trying to get the most out of their skates which I totally understand as skates can be a bit pricey these days. 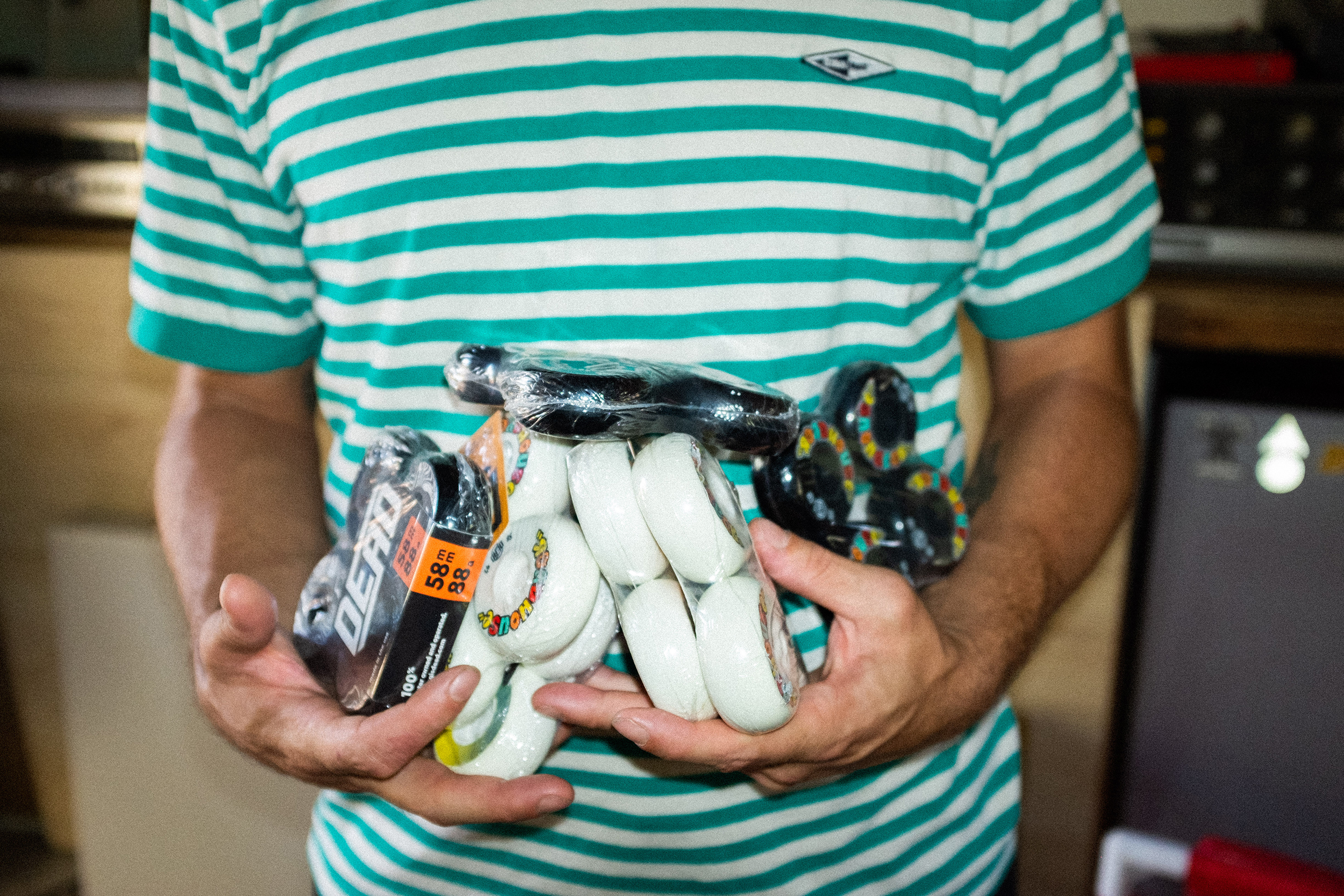 Everything can be pricey these days! Well thank you, Chris, for taking time to answer our questions and shed a bit of light on the mysterious Astral Blades! We wish you continued luck on your road to getting that cafe. We can’t wait to check it out.