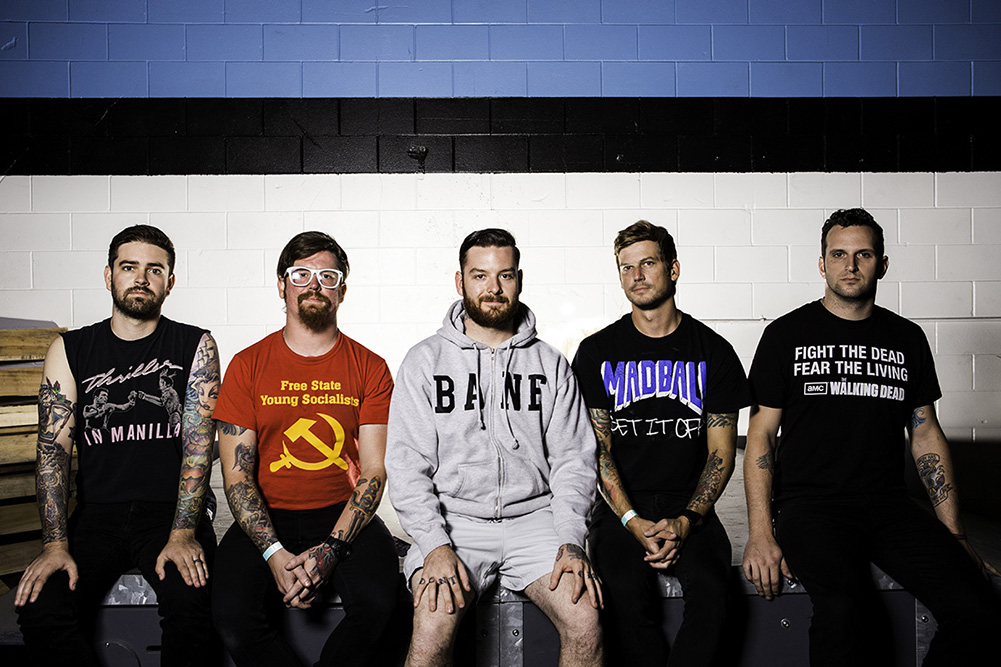 Like many bands before them, the members of Senses Fail have gone through a major sound change with their latest album, Renacer.

We got a chance to sit down with James “Buddy” Nielsen (vocals) to talk fans, sound changes, and we even got a little philosophical!

So sit back, and prepare to be “enlightened!”

How much influence did Shaun Lopez (producer) have on the sound of your latest album, “Renacer”?
Not as much as you would think. We brought a lot of those songs to him as they were, so he wasn’t trying to make us more like Deftones or anything like that; just kind of happened that way I guess.

Over the last year we’ve been hearing you talk about these “mixed” crowds and how rough it’s been, so where have you had the most receptive crowds?
Oh, in major cities definitely. It’s tough in these smaller cities where they aren’t as up to speed with the music industry in general, you know what I mean? When you go to these major cities like NYC, Chicago, LA, they’re already sort of on the cutting edge of, well, everything — ha ha. So in those cities they are aware of what we are doing and it tends to go better, whereas some of these cities aren’t even aware that we have put out two records in the last four years; places like Des Moines. 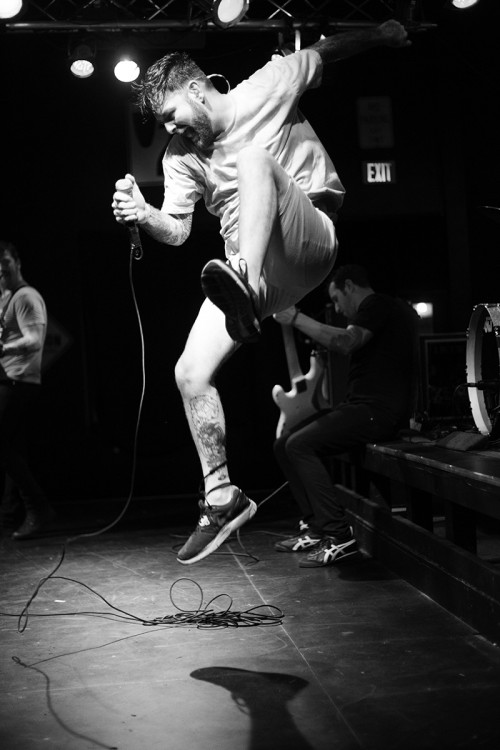 Was there a moment with your previous work where you thought “I don’t know how much more of this I can take”?
Yeah, we wrote a couple of songs that were in the same vein that we all felt were pretty boring and we thought “This isn’t good, I don’t want to go that way anymore.” We knew we didn’t want to force it, and honestly we didn’t have to, so we tried something else. Same goes for the next record, it could be totally different from this one (Renacer). I don’t know if that’s good or bad, but I just want to make sure we enjoy what we do.

I was impressed with this record because it doesn’t sound forced, ya know. “Renacer” sounds like it is your Sophomore album, of this genre I mean.
Oh yeah, well, I mean, I think we’re all good enough musicians that we could do any kind of music we wanted, I don’t know if it would sound good with my voice, but we could definitely do any genre we wanted. We don’t necessarily wan’t to go changing EVERY record we put out, that wouldn’t make sense really.

The three people that came on and are now apart of Senses Fail, were their backgrounds more in that metal genre?
Yeah, I would definitely say that, more so than what we were doing before, for sure.

How much of this album was influenced by your Buddhist beliefs?
The record is actually all quotes from Buddhist teachings! No ones ever asked me or caught onto it, which I thought was weird. For instance our song “The Path,” it’s all about the path to enlightenment which is the central belief or goal in Buddhism. Every record I write is about what I want to transform into, or where I want to be by the time I write the next record.

A lot of people speculate that you are an atheist from some of your lyrics and some of the things you have said in interviews. Do you consider yourself an Atheist?
No, I’m definitely not an Atheist. I just don’t believe in one God, or what western religion’s version of God is. I think it’s short sided and wrong for people to believe that this omnipotent being is vengeful and jealous. What’s mainly preached over here is guilt, that you should feel guilty just for being here. That’s not a healthy way to live, and that’s why you see so much depression, anxiety and mental health issues here in America. 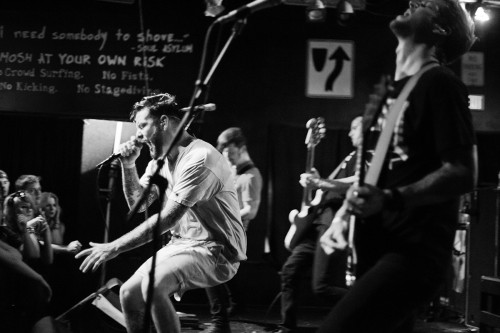 Would you agree that they preach that you should feel shame?
Oh absolutely, you’re taught that you are BORN shameful. That belief is one of the cornerstones I feel for most religions that people follow. America is so married to this belief and that we need saving, we have to be saved because we are these shameful beings, you and most of the places we’ve been in Europe just aren’t that way. They are trying harder to separate religion from their government and lifestyle. With America, when you tie in the fact that they perpetuate this belief that success means making lots of money, and if you aren’t or if you don’t have a big house with a picket fence, you’re doing something wrong, that coupled with this belief system of being shameful and we’re all sinners, you just get lots of unhappiness.

Christianity is so misinterpreted, and it seems like it’s just getting worse.

So what do you do in your own life knowing these things, to make yourself happier?
It’s a lot of ignoring judgement, and not just what people think of you, but your own internal dialogue of how you’re viewing yourself. Trying to accept everything as it is instead of what you think it should be, which is really hard to do. It’s also something again that I feel Europe is doing well because a lot of them don’t have these high profile jobs, but they are living happy lives. They are working jobs that we as Americans would think “How can you be happy? Don’t you want to do more with your life?” You know as Americans we just can’t wrap our heads around it. Another thing for me is to stop looking at things as a negative or a positive, things just are the way they are.

If something happens that you don’t like or think is bad, it only becomes a negative thing if you allow it to be. So your inner dialogue again plays a big role in that. You always remember the past better than it actually was, the present isn’t as good as it could be, and the future is more unresolved than it actually is. So stop comparing things, or saying that it will be better, just be acceptant of what it is today.

You mentioned how in other countries people live happy lives without high paying jobs. Is that important to you, and how close do you think you are to that belief?
It’s tough because I want to be successful, which obviously involves having money, but I want to be successful because I have such an attachment to this band and to what we’re doing. So I don’t view our success as making a lot of money, I view it as we are successful at being a band and doing what we love. The money isn’t what makes me happy, it’s what we have and will accomplish as a band. I definitely want to have a nice house when I have a family, I’d love to give a decent life to my children. If I could be in a position where I don’t have to worry about money, that would be ideal, but I’ve been in places where I had tons of money and I was unhappy, and I’ve been broke and extremely happy!

We’ve seen people who have been members of bands for the majority of their lives, would you like to be one of those people? Do you always want to be in a band?
I don’t know, at this point I still use it as a tool for me to express myself, it’s still very much a part of me. I’ll know when it’s done I guess, but it’s certainly not done yet. I may not want to tour when I’m older, or fuck I may always want to tour! We don’t really tour that much though right now, we’ve only done a couple in the last three years. Being a “semi-successful” band we’re able to do all this without it consuming our lives. 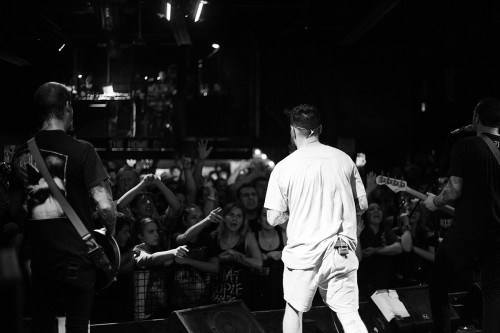 You know, thinking about all of this money talk and success, let’s get hypothetical. Let’s say Bill Gates drops in through the ceiling on his jetpack and says “Buddy, I will give you any amount of money you want to start a business or venture. You’ll never have to pay me back, and you will never lose money.” What kind of business would you start, and where would you like to have it?
A restaurant. I mean, I don’t know anything about restaurants, ha ha, I could never work as an employee, but I love restaurants and I love FOOD! So that’s what I would do, and I would probably have two locations. One in New York, and probably one in LA. Bi-coastal, live in both places — ha.

Interview, Photos and God-bashing by Dookie