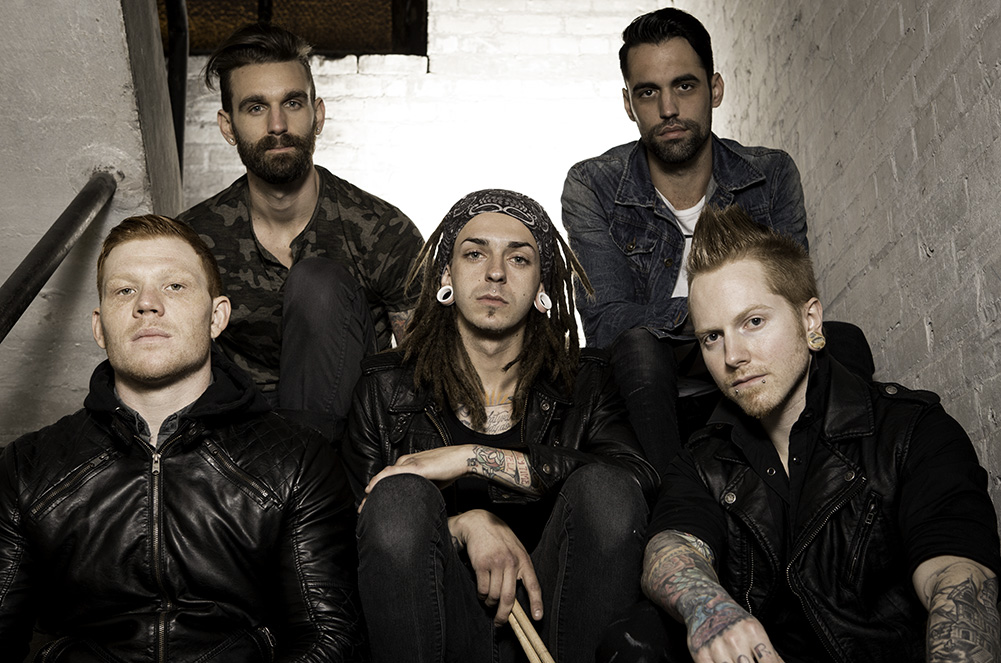 On St. Pattys Day weekend we spent a night on the Unconditional Tour with A Skylit Drive. If you haven’t gotten a chance to check out the tour, it’s definitely worth your time!

After their set, we sat down with Jag to talk about the tour, the band, carbs, and life!

When was the last time you (A Skylit Drive) were on Warped Tour?
The last one we did was in 2011, so just about three years ago.

How do you get on a big tour like that?
As far as I know, Kevin Lyman (CEO) hand-picks the bulk of the bands. You could have a great management team or fight hard for it, but if  Kevin doesn’t want you to be a part of the tour, you won’t be on the tour. 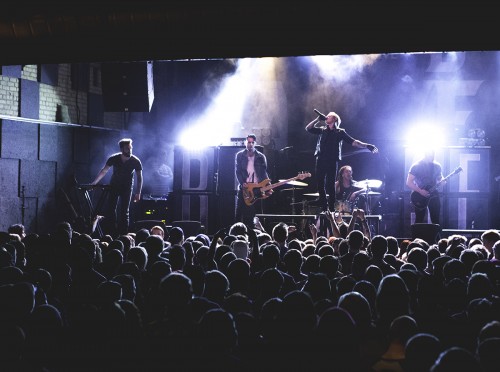 What is that whole experience like, going from city to city with all of these bands?
It’s like a mobile summer camp — we love it! It’s so different from any other tour, easily the most fun tour you can do. I say that, but it’s also the most exhausting tour, ha ha.

Did you have your grande ice soy two pump sugar free vanilla latte with light ice, today?
Ha ha, no I didn’t! I looked up how close the nearest Starbucks is today, and it was just too far. There is a gym pretty close by, not a Starbucks though.

I’ve seen a video of you cooking beef & broccoli stir-fry at 65 mph, which doesn’t seem like your typical tour meal. Are you a big fan of cooking when you are not on tour?
Oh, definitely. When I’m at home I’m always cooking my own meals, very health conscious of what I am putting in my own body. I track all of the nutrients that I eat throughout the day, I know what NOT to eat so I don’t go over those numbers. 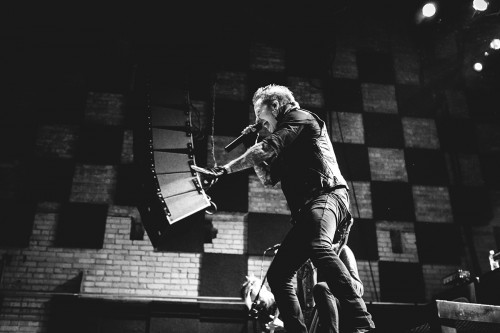 What do you mean by numbers?
Well I am a certified personal trainer, so I know how to build plans for people as well as myself to eat the right amount of proteins, carbs, fats, etc., to reach the goals you want to hit. So for me to reach the goals that I want to hit, I pay very close attention to what I am introducing to my body.

Have you guys been able to make it back to Chile yet?
No, we haven’t, which is such a drag. We had a South America tour booked with Alesana, but one of the main companies involved didn’t seem very solid and the money aspect was a little sketchy. It was just a lot to commit to with all of the uncertainty kind of looming over. So when Alesana dropped out, we followed.

Another thing though that we’ve been told is that the scene in Chile isn’t the same as it used to be, so we just wouldn’t be able to make sense of it from a marketing perspective either. It’s a bummer because we would love so much to go back. The last time we went was with Alesana and it was just such a great experience, so I would love to see what it would be like with us headlining a tour because it was so amazing just as a support band, it would definitely be nice. 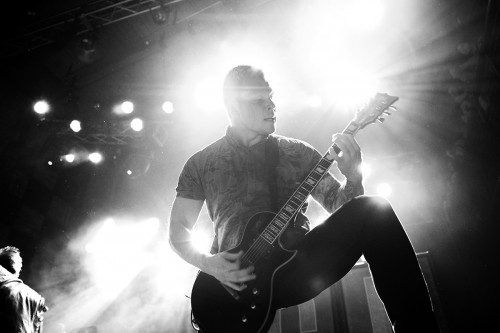 Do you think you would ever take a personal vacation out there?
We travel so much and are so busy, it’s hard to think of when I would ever have time honestly.

What kinds of things did you deal with in high school? Why were you bullied?
The music I listened to, the clothes I wore. It didn’t help that I was smaller than everyone either. Like, I don’t think they picked on me BECAUSE I was smaller, but I think they were less afraid to because of my size, you know what I mean?
I was in that new metal phase so I wore spike bracelets, had crazy hair, different clothes, all of those things in this small town and no one else looked like me. So no one knew why I was wearing this stuff or who the bands were that were on my shirt, so they just didn’t understand.

Did you have any kind of support group? Friends? Family?
I had friends yeah, but they were all older than me. So the bullying was at its worst when all of my friends had graduated — I pretty much was by myself. Moving to California though after I graduated made all the difference. I was able to not only be myself, but to pursue music as well. It brought me to where I am today both as a human being, and a musician. 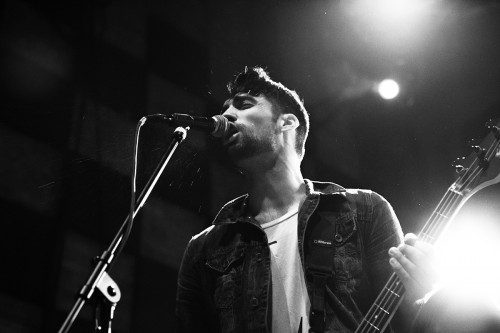 How many of the songs from your latest album [Rise] are you playing tonight?
Six out of the 7seven.

That’s gotta feel nice being able to play so many new songs and still have such a receptive crowd.
Oh yeah man, for sure. That was one of our goals with this tour — to play only new songs, but Wires and the Concept of Breathing is such an anthem, we just couldn’t let go of it yet. That song has been apart of our live set for so long, it’s been there since I came on, and it never left.

For Rise I see that you worked with producer Cameron Mizell. Was this everyone’s first time working with him? What made you want to work with him?
Yes, this was the first album we worked on with him. It’s interesting because we had almost the entire album written before we even went into studio, but we knew that Cameron could give it the production and sound that we wanted. There was this specific crisp sound we wanted through the album. We wanted Cameron to bring these songs to life. 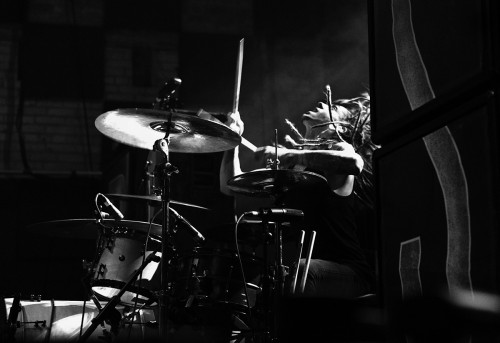 So how much did he add to the songs?
I don’t want to downplay what Cameron did or take away from what a great help he was, but if you want to break it down into percentages? Maybe, 5%?

That 5% was production stuff that we just couldn’t do though, you know? Like he knew where to put strings in a song and how to liven one section up, and that’s why we went to him. The things we wanted from Cameron were the exact things he specializes in. He does such a great job of filling out a song and making them sound exactly the way you imagined them to.

With all of these horror stories of bands being fucked over by their label, does that fear ever cross your mind for ASD?
I think every band does, you know? It’s such a scary thing dealing with labels — you never know if you’re going to get your fair cut, because as the artist you’re already getting the short end of the stick. So yeah, you wonder what’s happening if I don’t even get that smaller cut? With Tragic Hero though, they have been so great and we have such a positive relationship with the label owners, it’s comforting to know them on a personal level. So right now we’re not worried, we know they would never do that to us.
It definitely happens though man, this industry is full of that shit. 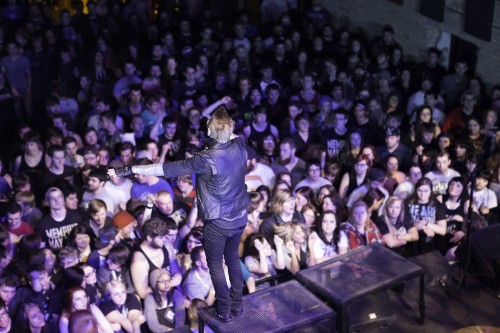 A lot of bands that have been putting albums out for as long you guys have fallen victim to having “filler” songs, but Rise doesn’t seem to have that problem. It’s a really solid album that you can listen to all the way through over and over. What do you think you will do for the next album?
Oh, I’m not even thinking about the next album right now. We’re focusing on bringing these songs to life during shows for our fans. People ask me about what we’re going to do for Warped Tour, what we’re doing for the next album, these things that I can’t really control right now, you know?

You can get A Skylit Drive’s album Rise HERE