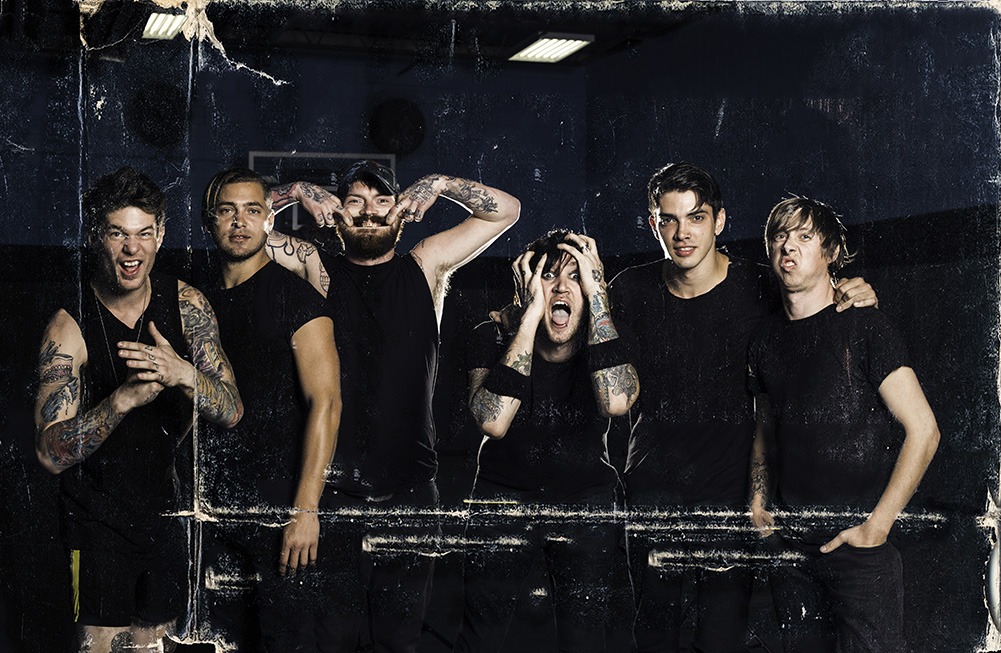 I have conducted a lot of interviews over the last three or so years, and I would say that Shawn and Dennis of Alesana are two of the most humble and kind dudes I have met thus far.

Alesana has maintained steady success over their decade-long career and seem to show no signs of slowing down. Back in March we took some time before their Minneapolis show to ask some questions, get some photos, and then watch one hell of a concert!

Talk to me about PMA.
Dennis: Positive Mental Attitude, man. It started with one of our first big tours with From Autumn to Ashes and Haste the Day. Autumn to Ashes had kind of introduced us to it. They were such positive guys — couldn’t have been a better situation for a tour — and it’s stuck with us through out our entire career.
Shawn: It’s a big thing that we preach for sure.
Dennis: We all have it tattooed on us even.
Shawn: That’s right, every single one of us…
Dennis: Each and every member…

(Dennis and Shawn starring at a band member, who shall not be named.) 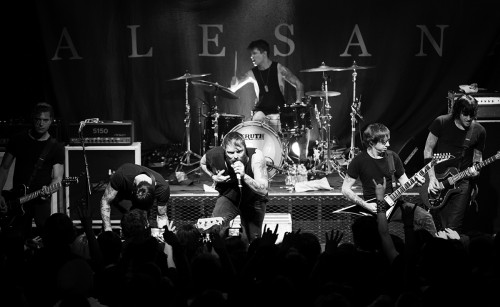 Can you think of a situation where PMA helped a situation between you guys?
Dennis: I wish I could say it wasn’t a weekly thing, but it really is. It’s tour life you know — it can get real shitty sometimes — and PMA focuses on that silver lining and helps us remember that we really are so fortunate to be able to do what we do. We’ve all worked 9–5 jobs, so we really appreciate being able to be apart of this band and do what we love.
Shawn: It’s all about recognizing when each other needs to be picked up, and we’ve gotten really good at spotting that with one another.

What is your favorite Korn song?
Shawn & Dennis: Ooooooh!
Shawn: Ok, I’ve always really wanted to cover “Got the Life.” So I guess I’ll have to pick that one.
Dennis: “Freak on a Leash,” man. That video, I mean, when I watched that for the first time my brain pretty much exploded. “Follow the Leader” though…
Shawn: Oh yeah, that’s the jam ha ha.

Could you ever see your band doing a big production like Sigur Ros for an entire album?
Shawn: That’s funny, because it’s something we’ve talked about for a while now. We’ve also talked about turning some of the stories into an almost play, or maybe more of a theatrical concert? So we’d play it and all through ut the show are actors, and props, stuff like that. It’s real difficult to negotiate though.
Dennis: Playing live is a big part of who we are. Each show is such a REAL show as it is with all of the intensity on stage. It would just be real tough to figure out how to have those people on stage without getting hurt! I could see filming something beforehand and having that play during our set, that would be pretty damn cool. 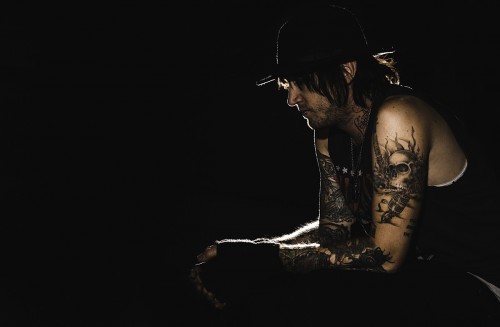 What it is you all like about Bangkok so much?
Shawn: It’s just the most incredible place we have ever been.
Dennis: “Tuck tucks.”
Shawn: Yeah man, “tuck tucks,” dollar plates of Thai food. I think a big part of it too is the time we had. We were able to spend like three days there, and the experience we had lent itself to how much we all liked Bangkok.
Dennis: It was borderline magical man, seriously.
Shawn: Yeah, it really was. The hotel we were staying at was right across the street from the venue we were playing, so we got to walk over the street to the venue and see everything.
Dennis: There was this cover band there too that could play ANY song you could think of, ha ha.
Shawn: Yeah, and then after all of that, they shut down the venue just so we could all hang out there. We owe it to the people there for showing us such an amazing time.

How many transvestites did you see there?
Dennis: You mean how many hot chicks did I see that I still don’t believe were transvestites?
Shawn: Yeah, I told myself I saw none..

It’s the only way to do it! Now we’ve got that out of the way. Shawn, could you ever see yourself taking your family there?
Shawn: Actually [laugh], that’s where we conceived our son, ha ha! 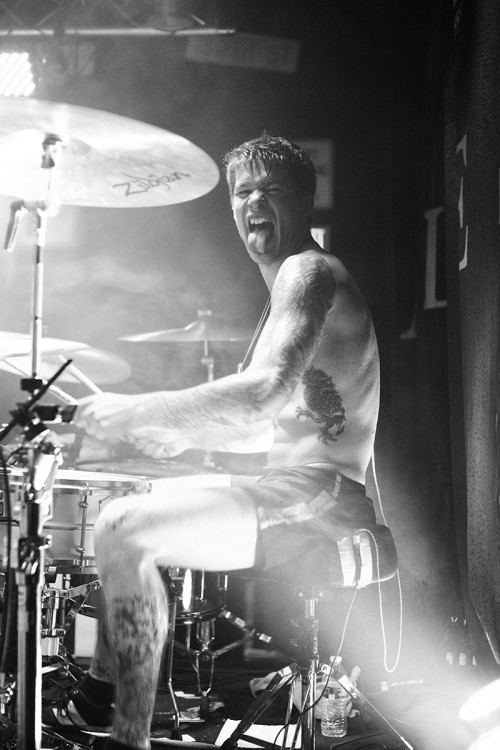 Being that you guys have toured for so many years now, would you rather deal with the extreme hot legs of a tour, or the extreme cold legs?
Dennis: [Almost before the question was done] Extreme hot, hands down.
Shawn: I HATE cold weather on tour.
Dennis: It’s just too brutal man. Don’t get me wrong, the hot sucks, but going from extreme cold and then performing on stage where you get incredibly hot, and then going back to that freezing cold? It fucks with your system man.
Shawn: Beanie, gloves, scarves, jacket, all that shit you have to take off and then put back on dripping in sweat.
Dennis: We’re from North Carolina too, so we’re used to that humid hot weather.

Shawn how do you feel about stepping into the producer role for this new album?
Shawn: We all produce it together really, you know? We were finally able to open up a recording studio of our own. It’s just so cool to have it all be in our hands for a change.

I see, so it’s a collective vs your own project?
Shawn: Right. I mean, I produce records there, but our music we are all doing it together.

So who have you been working with then personally?
Shawn: Well, Revival Recordings (studio) will be making Farewell My Love’s record this fall, and we just finished a record for Megosh as well. That’s all pretty current.

Do you have a new found appreciation for producing then?
Shawn: It’s something I’ve always wanted to be involved with. I’m just in love with the whole process of making a record in general. So I don’t know if it’s really a new appreciation, but it’s definitely been a passion of mine for some time. 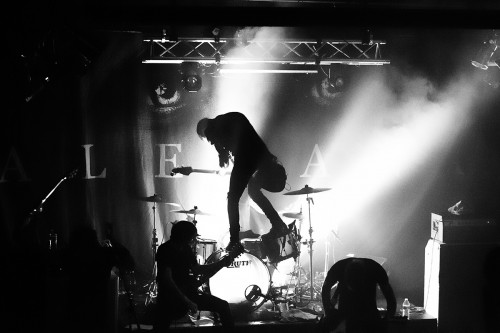 Who is all currently with Revival right now then?
Shawn: Megosh and us (Alesana) really are it. We’ve got some things we’re working on, but those are the two focus bands for now.

Could you put into perspective for us as to just how nerdy you (Shawn) and Dennis really are?
Dennis: My entire right arm is covered in tattoos from a game called “Warhammer 40K,” which is a table top strategy game. I built a bunch of miniatures, painted them, built all of the bunkers and buildings that we play on a 4×4 table. There’s roll books and dice. That’s that real nerd shit, man.
[Shawn and Dennis laugh]
Shawn: I feel like we could have lead off with MY arm.
Dennis: [laughs] Oh yeah look at Shawn’s arm covered in Zelda!
Shawn: So anyone who pays attention to our arms can start to unravel our nerdiness. All Zelda, Warhammer, but no, wait, we’re in a rock band! We’re cool!

So we do we have to look forward to from you guys?
Shawn: Well, the Decade Album is out now, and once this tour is over we are going to begin to conclude the Annabel story trilogy. The last record for Annabel, we’re going to do some real creative stuff for that.

Sounds exciting and busy and like we can’t wait to hear the results. Thanks so much for your time guys!

You can get the new Decade EP HERE: