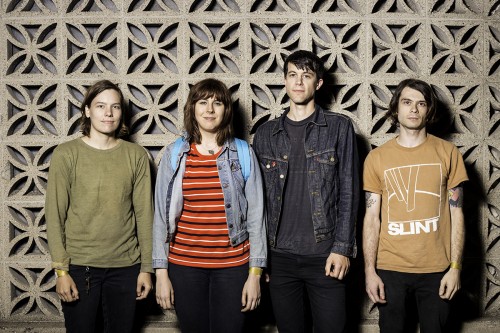 Bleeding Rainbow is a garage-y pop band from Philly. They’ve released three albums and have about the same number of band names. They’ve added members, filled out their sound, and moved into a kinda nostalgic power-pop styling that kinda reminds me of The Breeders or Luscious Jackson or something like that.

Out on tour supporting the new album Yeah Right, Bleeding Rainbow swung through Minneapolis and ONE could get me in the door and secure some time with the band. They were playing at 7th Street Entry, and since I’d not been since The Depot Bar opened, it seemed like something worth checking out.

As usual, I arrived about an hour early for my shoot just to get a feel for the area and scope out how/where I wanted to shoot. That all went smoothly so I had time to spare.

Sauntering up to the bar, I spotted four people sitting at a table — it was Bleeding Rainbow.

Introductions were made and, despite their obvious lack of enthusiasm for my presence, I hung around to discuss the photo shoot and their tour.

When drinks were finished we made our way out behind the venue and set up the shot. We had to dodge the occasional traffic, but Sarah and I had enough time to chat for me to get sincere vibe from her. The whole band seemed like a legit group of individuals.

Later, when the lights were turned down, the bar tenders were busy and the crowd was packed in, those same seemingly-timid individuals came to life and filled 7th Street with their throwback, reverb-heavy, shoegaze-y riffs and Sarah’s swirling vocals. Dedicated Bleeding Rainbow fans in the crowd (a lot of ’em) were definitely feeling it.

I lost track of time, the show ended, people cheered, and with a nod to the band I slipped into the warm Minneapolis night.