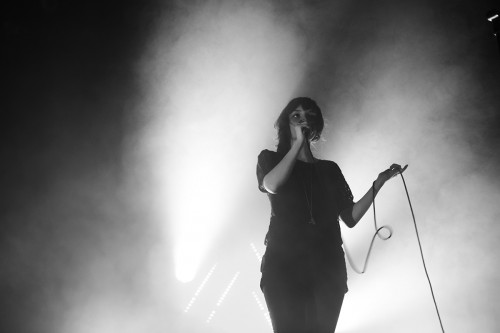 Early in September, I think it was the 9th, Chvrches played at First Avenue in Minneapolis, home of one of their major influences, Prince. A young artist by the name of XXYXX opened the show, and this was the first time I had seen an artist perform an entire set with no lights!

During the XXYXX(s) set more and more people began to pile in, and I got a few texts from friends saying they couldn’t get into the show because the show had sold out! I went outside to catch some air, and saw about 100 fans talking with security, bartering with strangers and on their phones trying to find a way to get in the show to see Chvrches, and with good reason.

9:00pm rolled around and First Avenue roared with excitement as Chvrches came on stage. They jumped right in performing “We Sink.” The light show was great. They had lights on both Ian and Martin’s synths, and back lights in the shape of triangle as well. Lauren wasn’t exactly a mover and a shaker, but that voice and those eyes were enough for this Twin Cities crowd.

The highlight of the show for me had be to when Martin took to center stage for vocals and the band performed “Under The Tide” Martin could not contain his incredible energy and the audience absolutely loved it! Fuck coordination, just let the music move you!  The band closed out with an encore cover of Prince’s “I Would Die For You,” which they also retired that night in honor of Prince at his home venue.

Chvrches was absolutely everything I had hoped for, with the exception of not being able to really see Ian all that well, hidden behind his synths. Other than that, Lauren and Martin have great stage presence and they perform without flaw.

Chvrches is currently on tour and released their first full album (that’s right, they sell out shows and they don’t even have a full album released) called The Bones of What You Believe. 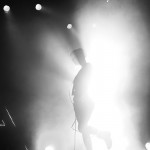 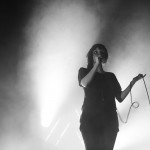 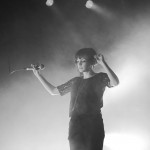