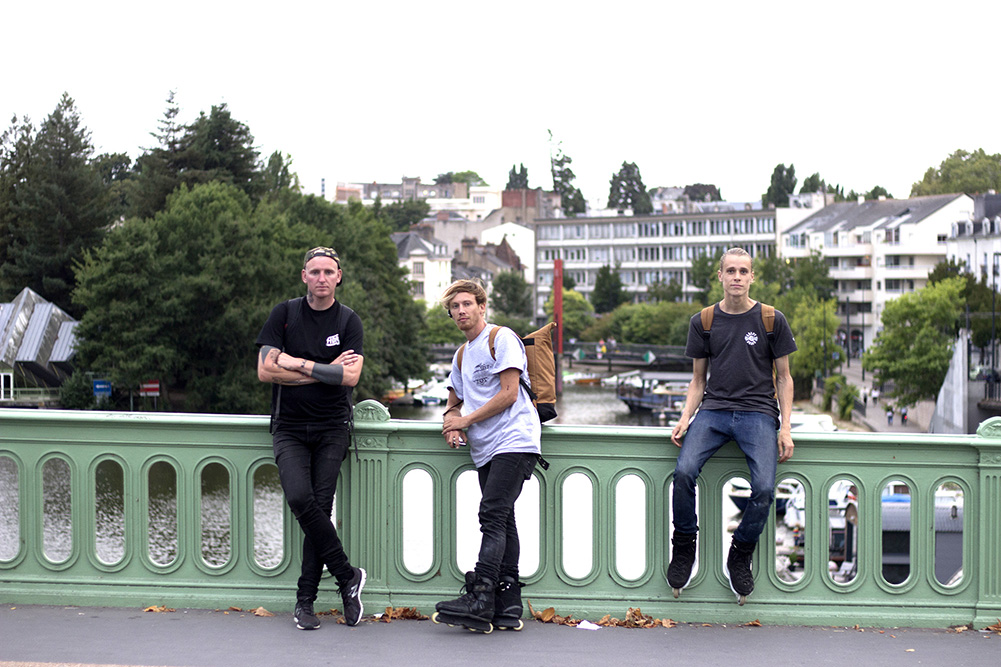 In a community that sometimes emphasizes skater-owned businesses, Adapt Brand stands apart for their self-reliance in not only being skater-owned but also skater-made. And in an effort to further showcase their qualities to the blade world, two years ago they set out with videographer Cavin Brinkman to document the team and capture the essence of their company in a project: Adapt Movie. ONE spoke with Cavin about the film, working with the skaters, traveling the world and how it feels upon the completion of his work. Read on to learn more.

Okay Cavin, tell everyone who you are, where you come from, and what you do when you’re not filming for the Adapt video.
My name is Cavin Brinkman and I’m Amsterdam based. Now 37 summers young. Besides filming for ADAPT I enjoy my free days with my girl and my two dogs. I like to travel and see bands play. Besides that I just shoot skaters as much as possible. 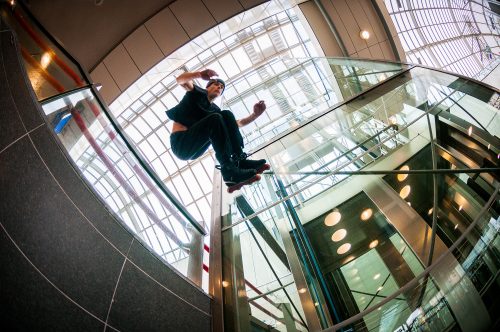 Now how did you get involved in the project?
Pieter asked me to shoot a full team video after I was planning to shoot a full-year profile with their team skater Levi van Rijn. 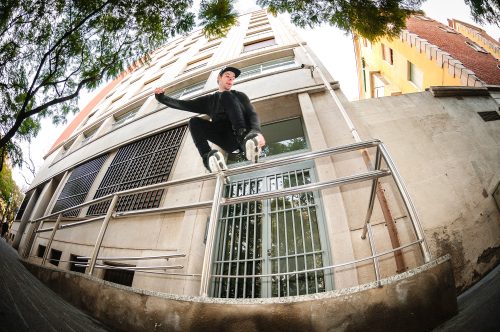 When did planning officially begin? Who all has feature sections in the video?
X-mas 2015 we decided, with the whole team, that making a team dvd would be the next big step in the ADAPT future. The whole team has sections in this feature including ADAPT/SYMETRICS supporters and two friend sections. 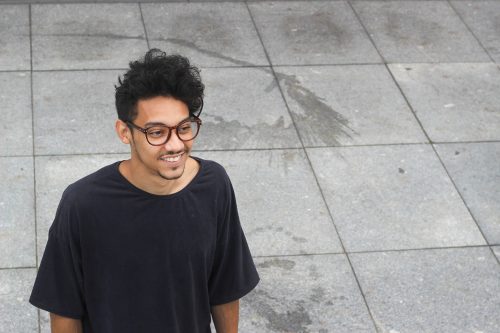 How many trips went into making it happen?
I lost count of how many trips. We went to Paris several times. Twice to Copenhagen. Lille and Nantes in France. London. All over the Netherlands, and Levi and I went to film with Russel in SD and Julian in ATL, both for one month. 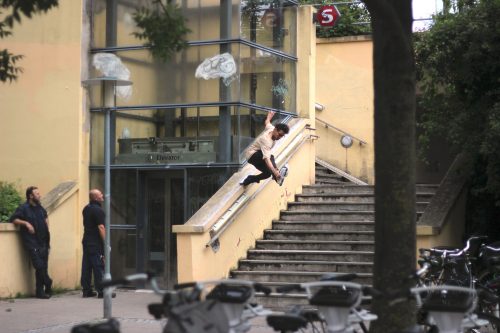 Damn you did two one-month trips to the US? Tell us about ‘em.
In the USA we tried to skate Los Angeles but during the week that was hard so we stayed mostly in the SD area. With Julian we made a weekend trip to Chattanooga, Tennessee and that was one of the best days of the trip. Ray and his girl Annie hosted us perfectly and we all skated really good. 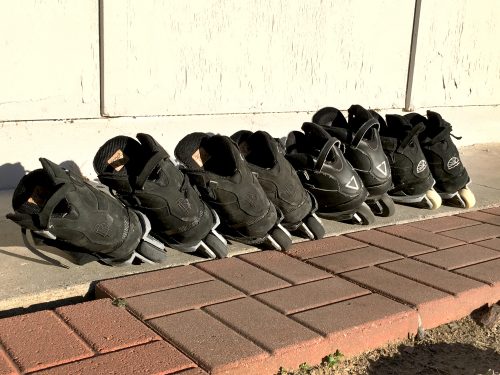 We heard when you got to San Diego your gig staying at Russ’ got blown up pretty quick. Where did you guys end up staying and what was that like?
The situation in SD was a bit difficult because it was not just me and Levi, but also my girl and Pascal Tan, who had to stay there too. You know how small Russell’s place is, so we kinda stayed with several other people those weeks. Logan “the dude” hosted us for a week in OB — that was not a bad place to stay right on the cliffs. Jon Fromm also hosted us for a week, mainly because Pascal was a team member 😉 naah jokes, Jon’s place was really nice with a swimming pool and AC. 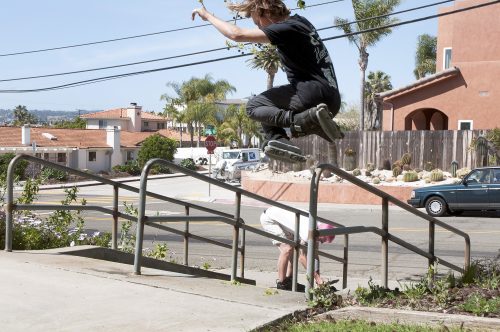 What about getting Russell and Julian to Europe and filming there… it’s hard to imagine Russell existing somewhere outside of SD and his network. Haha. Where all did you guys go and how many trips were there?
Yes, I found out that Russell outside of SD is something else. Both guys came to Europe twice. They each had a trip during summer 2016 that was about five weeks, then they were here at the same time during summer 2017 for about three weeks.

With Julian we went to Copenhagen, he stayed for Roskilde, and then we met up in London where we also attended the NASS festival. The rest of the trip was mainly in the Netherlands. 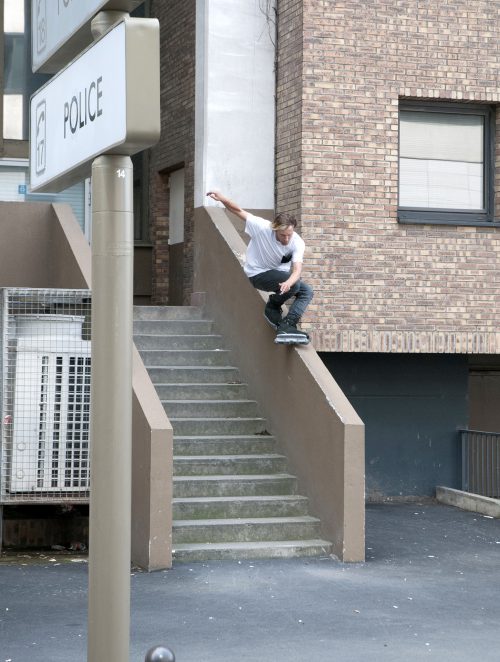 Russell came to Amsterdam first, then we did Paris and Nantes. He got hurt so he was out for about a week and a half but during that time he enjoyed the local coffeeshops and biked around with me. 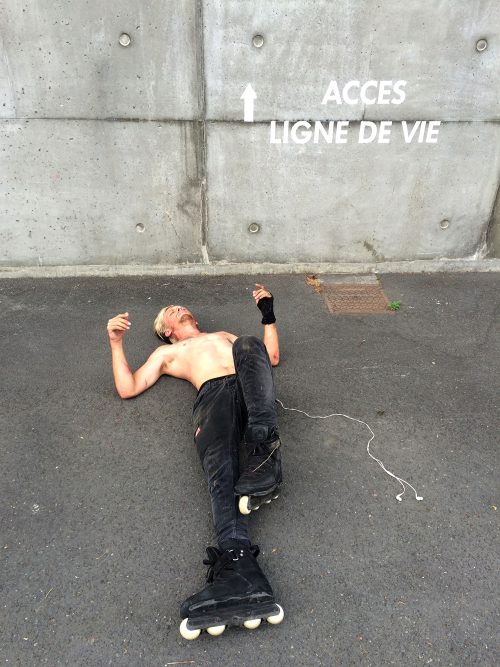 When they both came we stayed at my girlfriend’s parents place in Paris where we were able to get the whole team together for the first time ever. It was a change to get last deals taken care of in Paris to finish of the parts. 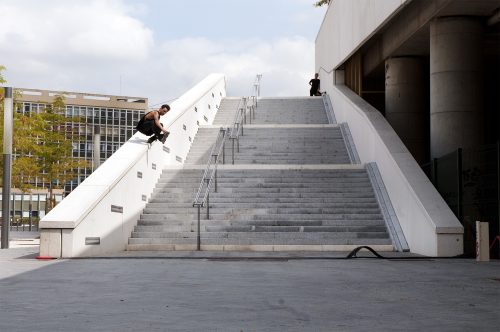 Which section do you like the most? And why?
So hard to say which I like the most, but I have to go for Levi. I saw Levi become a better skater every day over the last three years, and I filmed the most with him. We had our differences during the filming but we ended up both agreeing with each other that our disagreements were best for the video. Keep your eyes open for him — there is future in this young kid.

If you could go back and do anything different, what is it that bugs you and what would you do differently?
Go back and do something different is easy to say. I won’t do that, of course I wish I did this or filmed there or whatever, but that is something you should take with you for the next project. I am really happy how the movie turned out. All the skaters skated hard and copped with my demanding schedule. We should praise this project and celebrate rollerblading in general that it is still possible with no budget to make a thing like this happen. 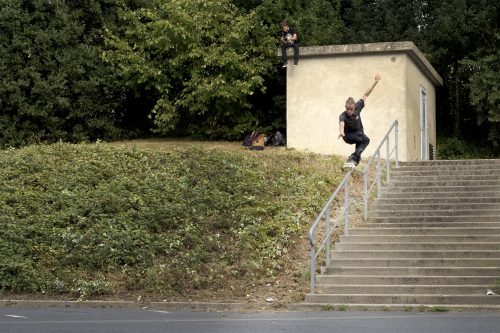 When people watch the video, what feeling do you want people to walk away with?
I am from the ‘90s so I loved all the long VHS skate videos. This video is 58 minutes from begin to end. Some might think that is long, but it’s two years of skating captured on tape. Kids nowadays have a short attention span, so everything longer than a minute is hard to contemplate. I hope people will appreciate the longer videos again with this. So I guess the main goal is that people want to go out and skate in whatever way they like to skate. And Pieter hopes that this video will make them wanna buy ADAPT skates of course.

Is there a definition of success you all have in mind for this, or now that you’re done and it’s coming out that’s the finish line as far as you’re concerned?
This is not the end at all! I am already filming with Levi for a new edit, and Sem is stoked to make new profile (maybe with less pressure) in 2018. I am planning to come over for Blading Cup and stay longer to film an edit with Russell. Pieter even said maybe we wait a year and then do it all over again. He has my number so I’ll just wait for his call.