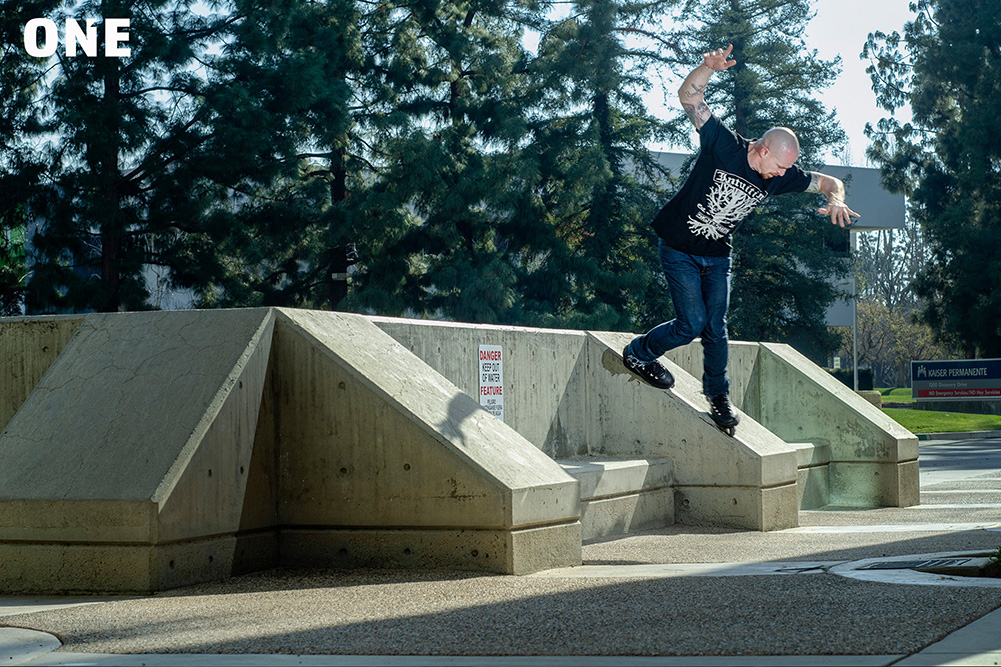 Derek Henderson‘s blading is enigmatic. Here’s this tall, intimidating-looking dude, that longtime friend Matt Mickey described in Issue #24 as “A self-made working man-blader, with Viking warrior blood pumping through a heart of gold”, that skates hard and fast… but is incredibly light on his feet. And when planning out how we were going to approach making JUST BLADE 2, and who would get a section, Derek was at the top of our list. Now that the dust has settled, and the new year is roaring towards summer, we caught up with Derek to ask him about getting things done for the latest print mag, and filming for his section. So read along to know more and see some previously unused images from Sean Macgowan.

Derek, closing out 2018 you landed six pages in ONE Issue #24, then 2019 started with the release of JUST BLADE 2 — featuring your profile section. Sounds like busy times! How’s it been for you?
It wasn’t too busy. I think we met up like four times and got it done. That’s the way I like to do it.

Before Issue #24, had you had a large print feature before? I should know but I’m blanking…
No, I have not — this was my first! I was supposed to when I was younger, but I ended up snapping my leg trying to get the last picture. After that I couldn’t skate for a year, and still can’t fuckin’ skate switch. Ha! 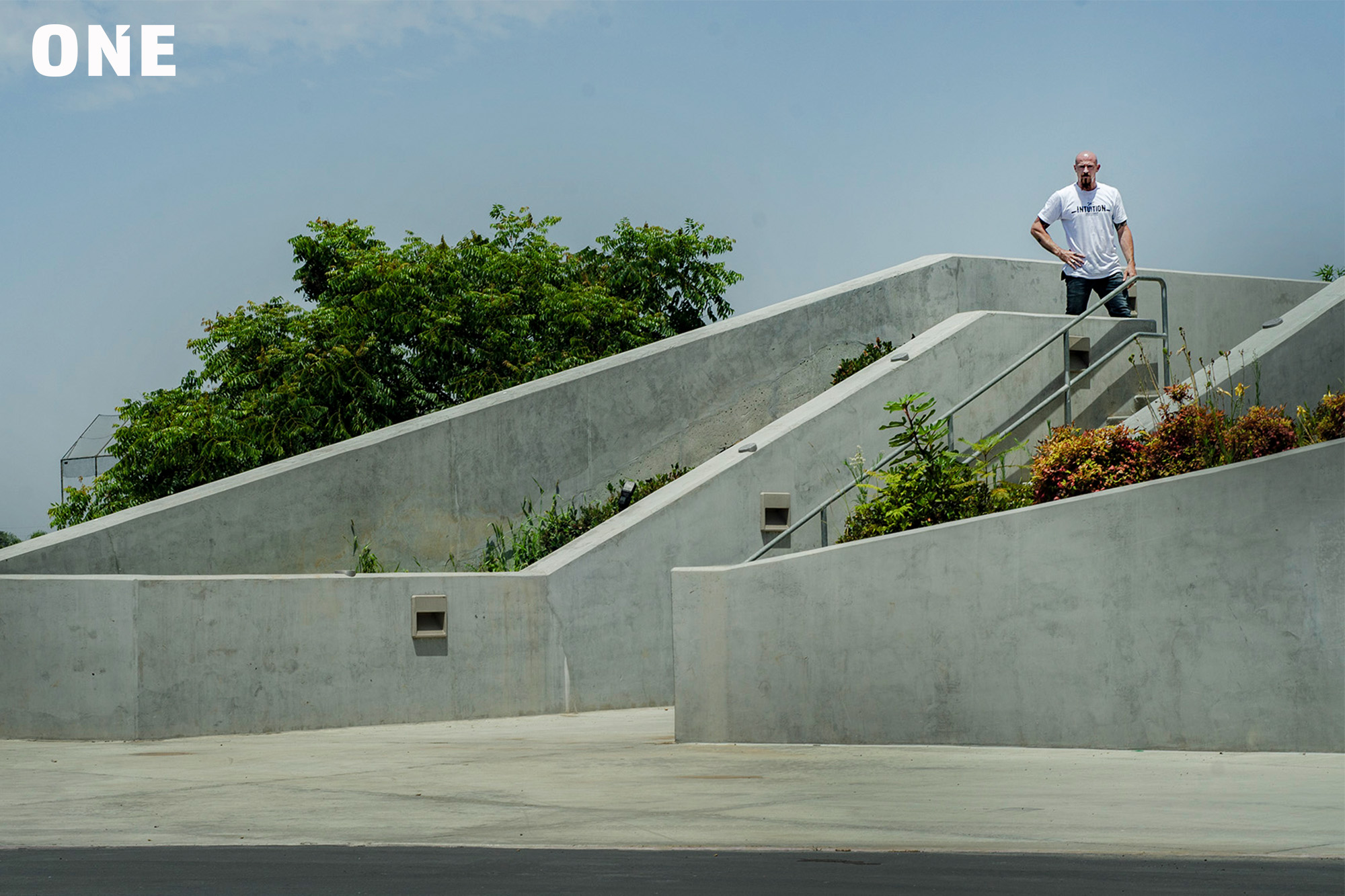 Did the idea of making photos to put into print raise the stakes at all on our sessions? Did you put more pressure on yourself of have expectations you wanted to meet?
No, not really. I was excited for the opportunity though. It makes it easy for me when someone reaches out and says they’re willing to meet up.

I know making all this took a lot of commitment and dedication on your part. We all live far away from each other and have busy lives with demanding schedules. How did you overcome those challenges?
If you want something, you’ll make it happen. When we met up I would just skate my ass off and then get back home to the family. We call this business blading. Not always the most fun, but I do have to admit I like letting the beast out every now and then… it feels good.

A few times we came to areas close to you, where you or Chad had spots on deck, but a few times we were in random meet ups or down here on our turf. When filming or shooting do you think it’s easier to really plan things out, or do seek-and-destroy missions where there’s no real plan of attack?
I’m starting to realize I like the seek and destroy method better. It’s more fun to go somewhere and see what happens, and it usually turns out better too. 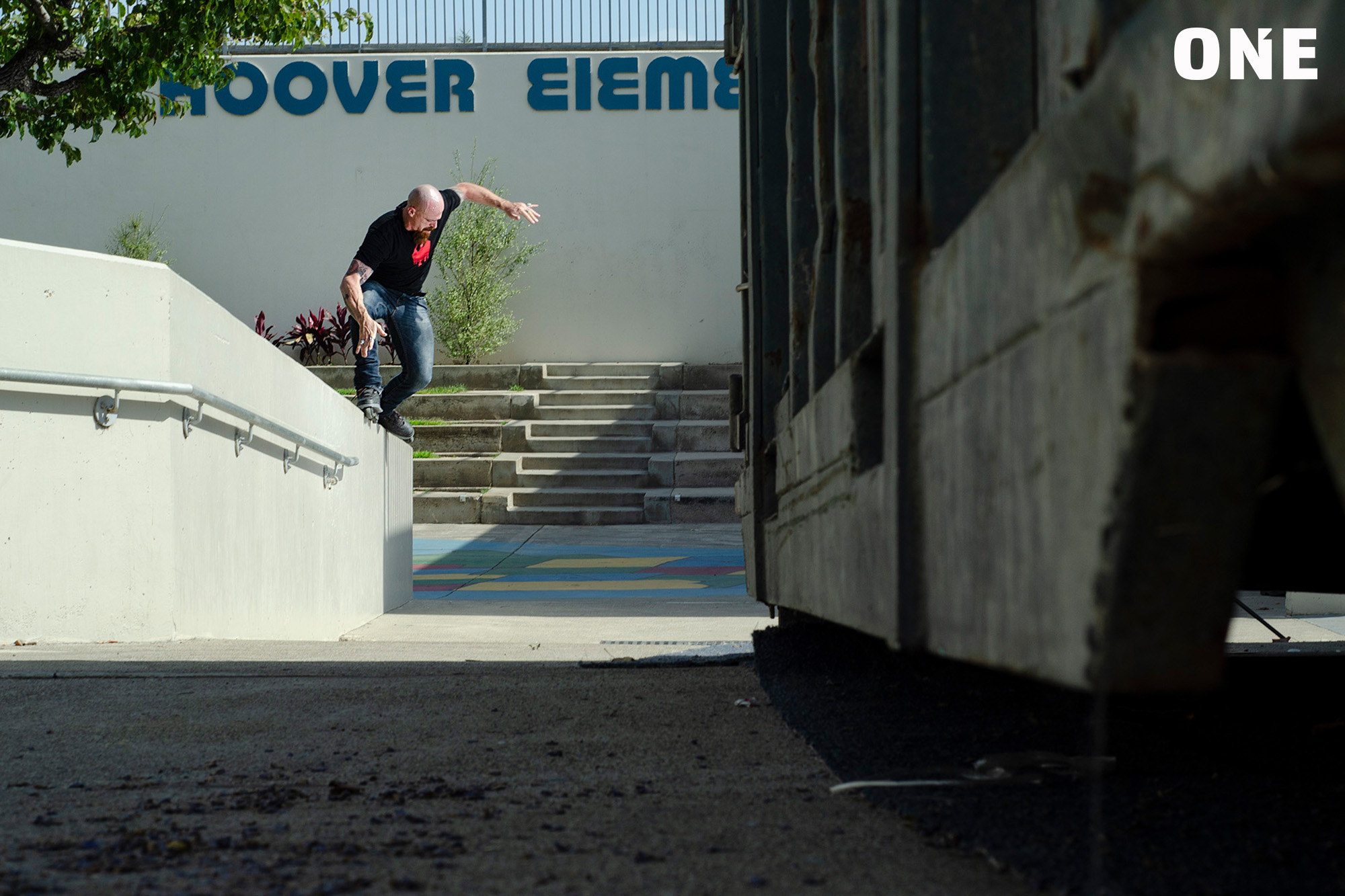 Got tips on either strategy for other bladers out there looking to capture their tricks on cool spots?
I would say to just skate spots that excite you. It makes it more natural and fun, although that’s not how I got this section done! For this I feel like I just skated everything I saw. Sometimes you gotta do what you gotta do to get shit done.

Any high point memories from the filming and photo sessions?
I had a blast skating in Santa Ana with you guys. I think that was my most productive day, like 8-10 clips or something. Feels good to be productive.

How about particular challenges or shitty things that may have happened? Tell it!
Getting hurt on that fire hydrant in SD sucked! I don’t know how I kept getting clips afterwards but when I got home I couldn’t skate for like three weeks. 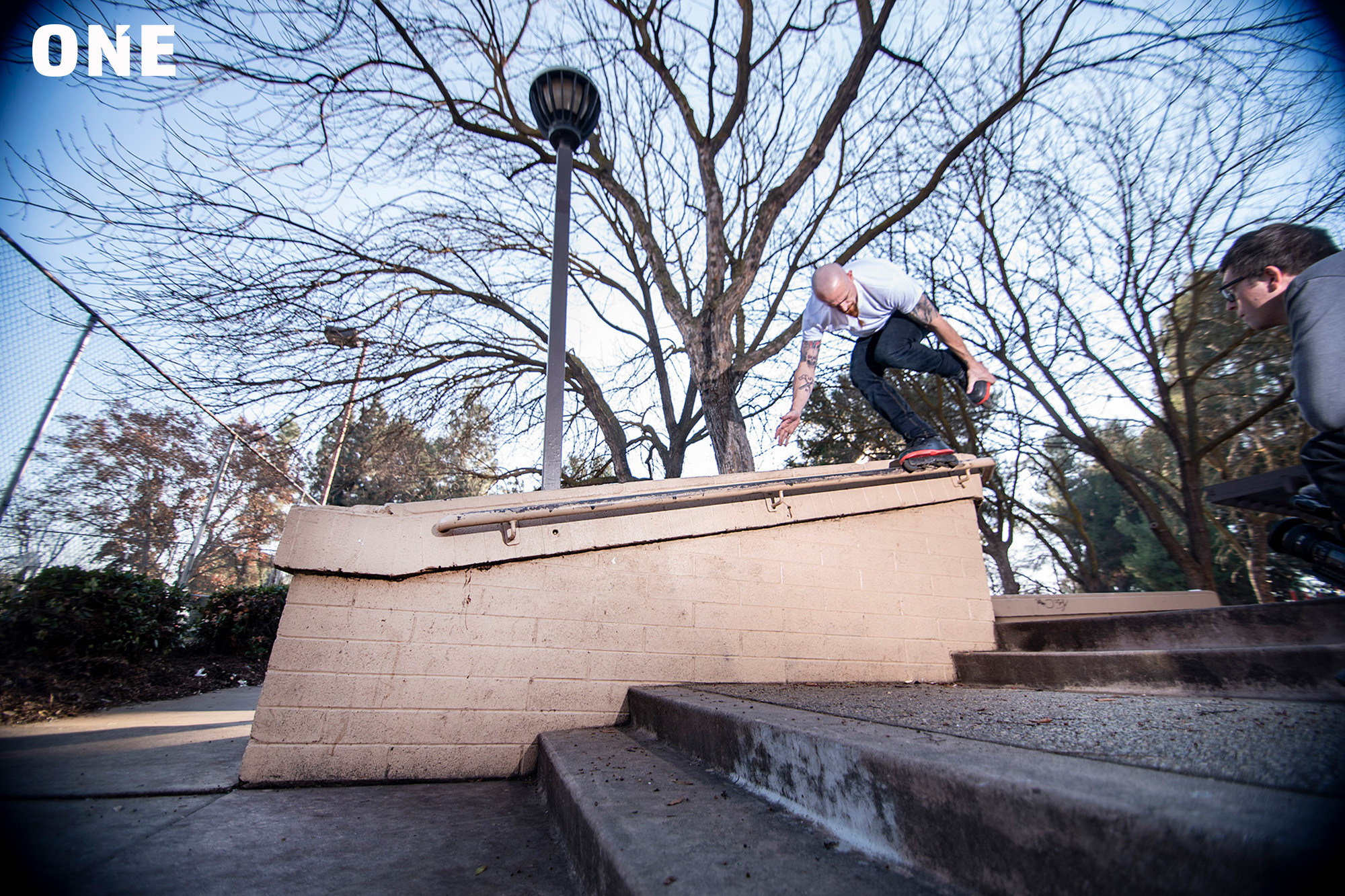 How about Matt Mickey’s write up for your print spotlight — did he show it to you before we ran it? What did you think?
I did not see it beforehand. First time I read it was at Blading Cup, and it made me cry a little. Fuckin’ Matt!

Looking back, which photo and clips are your favorites?
I liked the soul pic on the big ledge, and the Intuition ad in the back of the magazine the best.

You catch any other standout tricks in the video that deserve a shout out?
3 topsoul 5 out was kinda cool, I haven’t done that on a handrail since I was a kid, felt nostalgic. 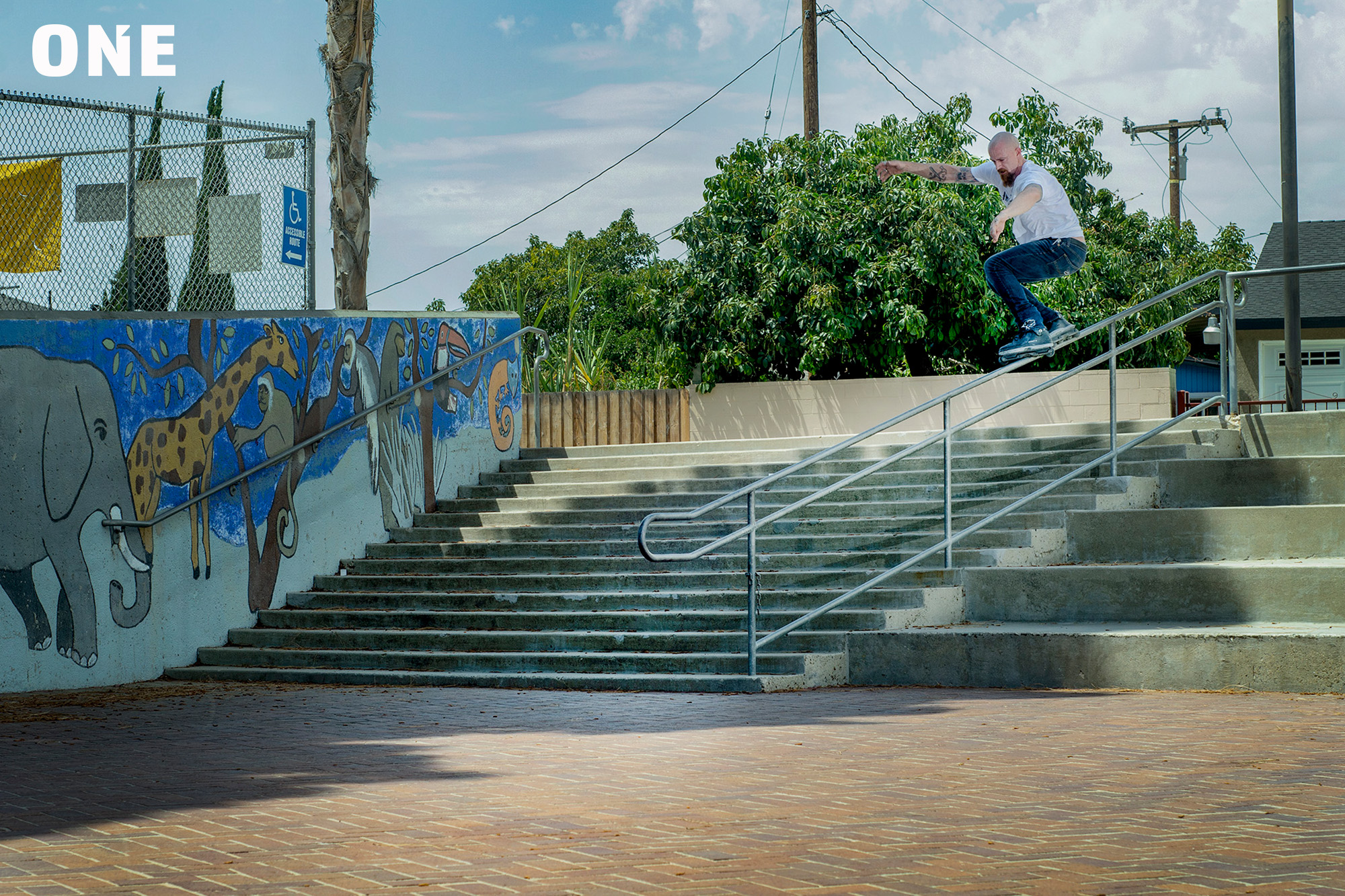 Well shit, Derek, I think that’s about all we wanted to know! Thanks again for busting your ass for the camera, and taking time to answer questions here. We had a great time getting to know you better while we worked together in 2018, and look forward to seeing what you make next, and then making something with you again in the future. Cheers!
Na man, thank you! I had a blast!

Get a copy of JUST BLADE 2 HERE