Five long years ago ONE tried out a digital-only magazine format. We called it “Digi” and the cover at launch featured, you guessed it, Mr. Andrew Broom. Then an already-emerging talent that was gaining a reputation for his feather-light presence and impressive trick selection, he and photographer Greg King put the pedal to the metal and delivered a solid set of photos that became the basis for this lengthly profile written by then-fellow-Texan Frank Stoner. And now, with a new VOD out in the wild and new horizons to explore, it’s a good time to look back at just how far Andrew has come.

“Andrew Broom reminds me of me… his skating and how he approaches it… down to him as a kid. The tricks have gotten more difficult, but I mean the bare bones of it. It’s weird that at 17, his skating can encompass every facet of rollerblading that I enjoy. It’s never a numbers game and there’s never any type of obvious formula—he’s just a kid that enjoys controlling his craft. Absolute manipulation. It’s rare to see that kind of ownership in someone so young.

In the industry, it’s always the same thing. Some pro is wearing “____” or doing “____”, so some other pro adopts it as if it were his own. With this kind of obvious peer inbreeding going down, growth from an individual is almost non-existent. While “the many” are practicing their style, wearing Disney-tough acces- sories, and creating cheap facades, Andrew’s busy being Andrew. And that’s what makes him the neces- sary breath of fresh air in this present stagnant industry. It’s completely his show.

Andrew is the next big thing.” – Micah Yeager

People can’t seem to talk very long about Andrew Broom without talk- ing about ‘the Future.’ No one really knows what rollerblading’s future is going to be or what it’s going to look like, but there’s a growing con- sensus that—whatever it’s going to be—Andrew will and should play a central role in it.

It might be because he’s young. At just 17 he’s got a lot of blading ahead of him. He’s also extraordinarily talented and ceaselessly original in both style and execution. But it seems that there’s something much deeper about Andrew that makes him and his skating so striking.

From where I’m sitting, I’d describe it as balance. 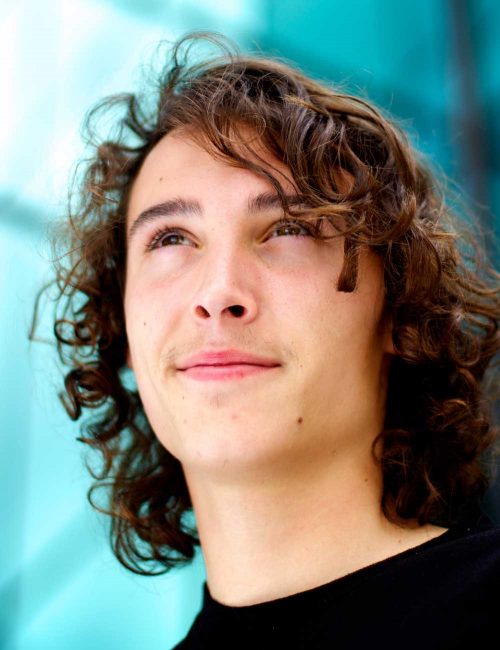 Not balance in the conventional sense of being able to stand on one foot or grind all the way down a long-ass thing; I mean balance in the sense of resting easily between two spaces. See, Andrew exists on the thin boundary between the twin forces of vice and virtue that have co- constructed rollerblading as much as they have co-created Andrew’s life. As a predominately male activity, rollerblading thrives in a range of not-so-savory elements that would make any Italian Futurist grin with satisfaction. I’m talking about things like high technology, hubris, greed, speed, aggression, destruction, courage, the perilous leap, and a fever- ish enthrallment with the wheel. In a word: our vices.

These things strike me as obvious outcomes of a testosterone-flooded environment. But many of them drive rollerblading forward into the future and guide our trends, establish our goals, and push our limits. But those problematic forces are not without mediation.

There is an entire other (and perhaps opposite) set of elements that help stay the madness that might otherwise consume us all in a violent ash of self-implosion. I’m talking about the virtues that exist within rollerblading. Things like brotherhood, friendship, family, sacrifice, sponsorship, travel, exploration, and the immense satisfaction that comes from mastering your craft. 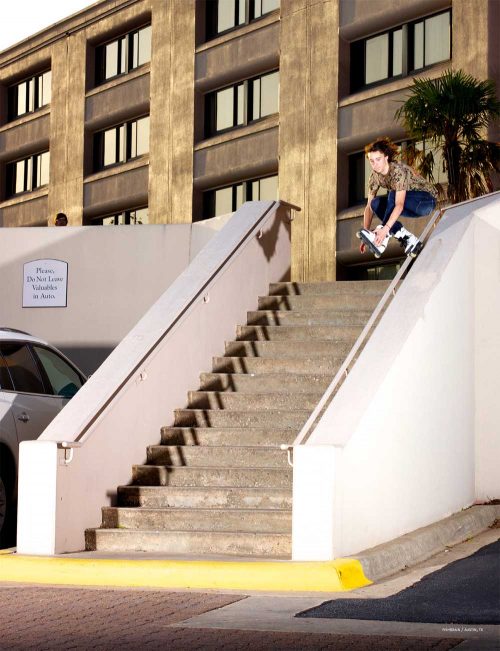 Andrew Broom is a guy who has experienced the extremes of vice and virtue both in his blading life and in his ‘regular’ life. Like rollerblading itself, he’s already had to deal with poverty, instability, and the threat of an uncertain future that comes from abandonment. He’s also spent a good portion of his life surrounded by drug and alcohol abuse. He’s been in and out of schools and possesses much more in the way of street smarts than in formal education.

Yet despite all of those things, he still seems able to find his balance. Many of the virtues that unify our community also guide Andrew. In that sense, he’s seen some of the very best of what the rollerblading experience has to offer. He’s a tattooed member of LST—a prominent blade crew from Texas. He’s known brotherhood from the close friends who’ve helped him through rough patches in his life. He’s traveled around Texas and recently made his first big trip out of state to skate at BCSD. He’s placed highly in several contests, and he holds an honest and refreshing sense of pride that comes from possessing immense tal- ent. But he still earnestly embraces valuable and humble qualities like modesty, gratitude, and humility.

To get some further context on Andrew, I spoke with Anthony Medina, a longtime blade- lm maker and OG from Texas. Anthony said that he thinks the term ‘the Future’ gets thrown around a little too much in rollerblading. “Being around blading for so long,” he said, “you’ll hear it a lot.” But despite the skepticism and experiences that tell him that “talented kids come and go in blading,” Anthony still confesses that after a few sessions skating with Andrew: “That kid really IS badass!”

Anthony added that while Andrew has experienced a fairly sudden rise in both praise and attention from the blading community, “…none of [it] has gone to his head. Andrew is as good a PERSON as he is on the blades.” He said, “Literally every time we finish blading Andrew will thank me for driving him around and lming. I certainly don’t mind it, […] but he’s still gracious nonetheless.” The other thing important to note is Andrew’s great attitude about skating. Anthony described him as “motivated,” saying “he does everything proper and he’ll re-do a trick 20 times (if he has to) to get it just right. Because of this, he’s gained re- spect from the most critical OGs in the Texas scene (myself included), [and] has a lot of big names in the industry taking notice.”

In the last twelve months or so, Andrew has gone from being virtually unknown in the wider rollerblading scene to holding a prominent spot on the AM team with the prestigious Adapt Brand. Company co-owner Pieter Wijnant explained that to him, “One of the downsides of skating for over 20 years is that you have to see all your favorite pros and icons fade. […] Legendary profiles such as Mike Lilly’s in ‘Road To Nowhere’ are starting to become very rare. In a time where the Internet is taking over and more quantity is [being] produced than quality, Andrew Broom managed to catch my attention.” Pieter—who originally heard about Andrew from an endorsing push from Micah Yeager—went on to say that “Andrew is rollerblading in its purest form,” and that he is our future.

And, it seems, Adapt is putting its money where its mouth is. Pieter went on to call Andrew a “future legend.” He wrote, “I have made it my mission to take care of him and support him all the way. […] If you asked me why we put him on our Adapt Am team I would say he is just in the waiting room to be our next Pro. We need new life and youth into our sport. At only 17 years [old] you could say he is too young to be Pro. But,” Pieter remarked, “remember when all your icons and legends were just 16 and their poster was on your bedroom door.”

Pieter Wijnant, the Adapt Brand, and several others, therefore, are pushing to help make Andrew Broom a new icon in rollerblading.

But such a mission isn’t without its dangers. 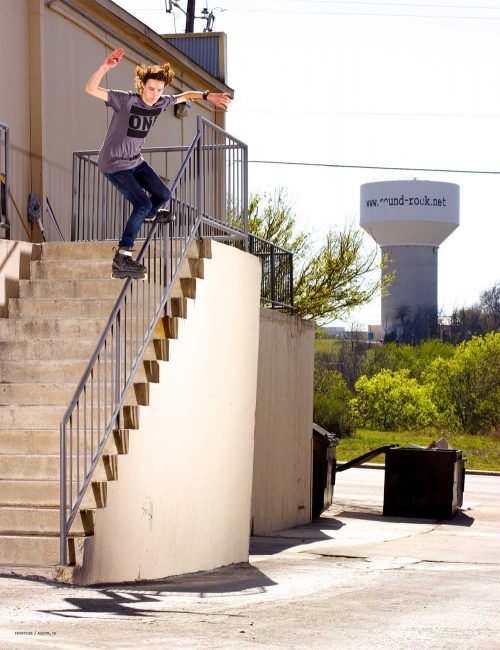 I mentioned vices and virtues before because they represent a series of challenges that both Andrew and the veterans of rollerblading will have to face in the coming years.

Andrew will have to take his abilities and knowledge and invent the future of rollerblading. In a way, we can already see him doing it. His skating is a rare mixture of many different forms in rollerblading, from the super tech to the super scary and from the super dif cult to the super creative. He’s already giving rollerblading a glimpse at what his in uence might be, and it appears that where it’s heading is a crafty conglomeration of those four categories just mentioned.

Andrew’s skating balances technicality with difficulty in extraordinary feats like fakie 540 heel rolls, and he mixes difficulty with creativity in doing tricks like a pudslides with switch 540s out. Another direction he seems to be leading rollerblading into—and this is one that will surely satisfy the veterans—is full ambidexterity. Not just things like natural and unnatural grinds: things like true spins, full cabs, illusion spins and fakie bowl skating both ways. Andrew may not know it yet, but right now he’s at the beginning of raising the level of professional skating to a whole new level and setting the bar quite far above the reach of much of what our community has become accustomed to. And he’s doing it all with a unique and authentic style that is cherished most highly among rollerbladers today.

Yet while that all sounds very nice and tidy, there are still the vices to contend with, and they’re coming from more than one direction. 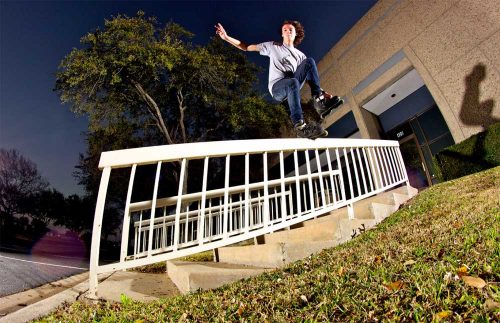 Andrew will have to find his own balance and his own path navigating between the perils that a rollerblading life presents: from booze and partying to instability and uncertainty. Given his predisposition toward virtue though, it seems a manageable challenge for someone like him. On the other hand, those of us veterans who would call Andrew ‘the Future’ need to take a tip from the playbook of the ancient Greeks and realize the danger presented by hubris. If we are to relinquish our holds on the rollerblading present, we should also be prepared to let go of our own greedy desire to steer rollerblading’s values and people in ways that suit our own tastes. If Andrew Broom really is ‘the Future’ of rollerblading, we need to let him make of it what he will. The most virtuous thing we can do to help him is provide him with a rich environment of support without hanging a noose of expectations around his neck that will only stifle and asphyxiate the promise he brings to our community.

The lesson, it appears, is one that Andrew is already teaching us. We need to nd our own balance. In order for us to move forward in ways that be t our values, we must walk the line between the vices that drive us and the virtues that keep us together. We must not burden people like Andrew with the nasty habits that have plagued previous generations and stymie him to the point of collapse. Instead, we have to nd ways to support him so that he can ascend to his fullest potential—no matter where or what that is. — Frank Stoner