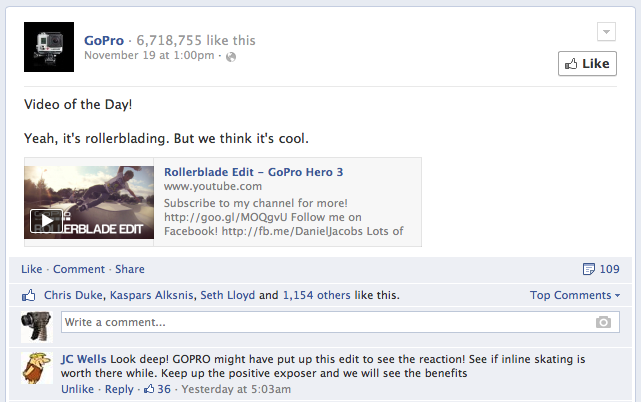 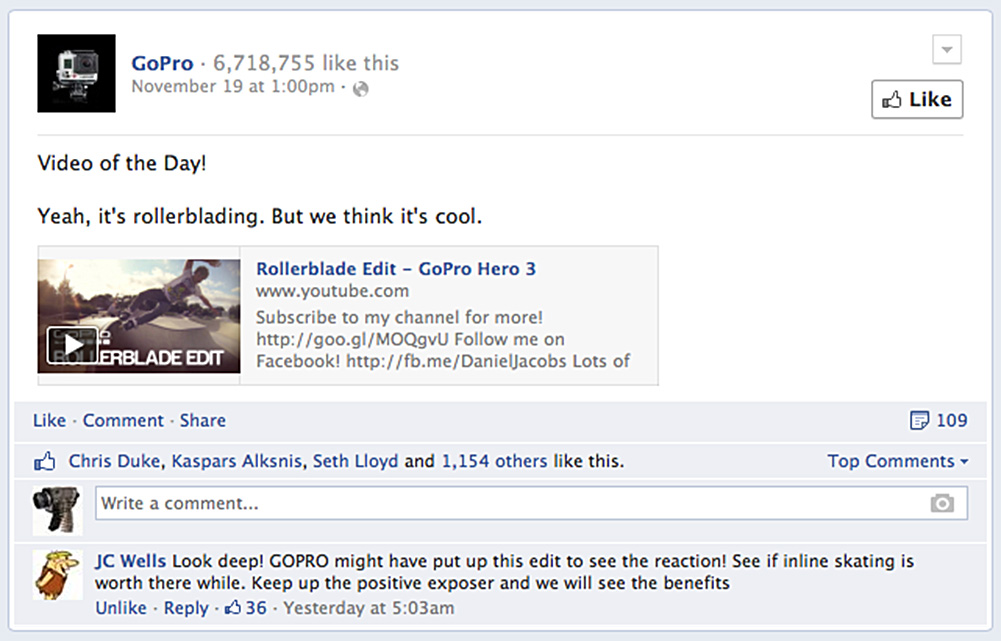 Does GoPro think rollerblading is cool?

Written by ONE Staff - Published on Thursday, November 21st, 2013

Chances are you heard or saw that earlier this week GoPro shared a rollerblading edit on their Facebook page.

Which is great — they’ve got like 7 million ‘Likes’ and lord knows blading needs more exposure.

But the thing is, they didn’t just give a description and post the edit. They added some editorial, and that kinda tainted what most bladers saw as otherwise goodwill towards the boots.

Here’s a couple example blurbs from other posts on the GoPro FB Page:

But here’s what they said about the blade edit:

If that’s not an underhanded statement, then we’re not sure what is.

Why care? Well, there’s those 7 million GoPro FB ‘Likes’, which is a lot of influence wielded over the public, and look at how the Likes/Shares for the blade edit stack up against the others.

Coincidence? Probably not. And of course the online blade defenders came out in force, among them esteemed leaders such as CJ Wellsmore — who offered a cool and levelheaded perspective to anyone that was losing their shit.

But we decided to dig a little deeper into the post and edit, so Chris Duke hit up Daniel Jacobs, the edit’s creator, to learn more about how this all came to pass. Read the interview below, but check out the edit first:

First, do you have a website. Second, tell me about yourself, and what it is your prefer to film.
I have my YouTube channel–trying to get subscribers, but it’s tough!
I film anything really. I’d like to shoot action sports, but the trouble is I don’t know many people with the skills, if you catch my drift. This is the third video of mine that GoPro have shared over this past year.

I think maybe they share them because it’s not epic footage, but it’s put together well and it shows footage that could be captured by the “normal” (non-athlete) person. Some comments I get say things like “pretty ordinary footage but I still watched it to the end.” That’s why I’m on the lookout to film some very talented people so I can create a really kick-ass edit!

So it was more for me to practice my filming/editing skills, as it’s a hobby of mine. I submitted the video to GoPro like many thousands of people do. I never really expected it to be shared by them!

How did you come to film these rollerbladers?
I’m always on the lookout to film stuff of people doing things they enjoy… I noticed a friend on Facebook saying he was into rollerblading so I made contact, asking if he minded me filming him skate. I hadn’t spoke to him in 10 years or so, but he was well up for it.

Were you familiar with the tension between the rollerblading community and other action sports before making this video?
I have to say no, not at all. Mind you, saying that, I suppose one inkling was when one of the guys made a remark about rollerbladers not having many friends at the skate park, but to be honest I thought he was joking.

It’s a shame though because, from what I saw, they were having a great laugh and it looks like great fun, so why should anyone have an issue with it? Surely the more variation at a skatepark the better? What’s the reason for the tension, etc. then?

What kind of equipment did you use?
In this edit I used the Hague Steadicam, a monopod, and the head strap mount (used that for the boot too).

Well thanks for speaking with us, Dan. Good luck getting subscribers on that channel and keep on filming what you like.

Gopros feed just reminded me of this…

Damn the previous link didn’t work. Anyways if your a true rollerblader then you’ve seen the movie “Barley Dead”
The link and time was the point Arlo was making about how the X-Games was saying, “just so you know Skateboarders, BMX’ers, we are going to have a rollerblader out there following you guys.” LIke they were apologizing to them. To me it was the same way GoPro said it on its FB feed. “yeah we know its Rollerblading, but….” Like apologizing not just to Skateboarders and BMX’ers this time, but to the all of its followers. I get that any exposure is good exposure, But its still, just frustrating to me that people talk shit about rollerblading. ONLINE at least. Been blading for 14 years and any time I go to a park Im usually the only rollerblader. NO Matter. I go and I kill that shit every time bc of motivation. No skateboarder or BMX’er ever says shit to me about rollerblading or even waxing for that matter. I do it right in front of them and while its the ledge or rail that they are skating. BC after words I put in work and I know they see that. I feel its like I’ve earned the respect. Not that I care if I have it or not. I still do me. Its just stupid that people are STILL bashing on it. Like, I get it, when we are first starting out in rollerblading, we kinda look silly, not gonna lie. but so does everyone else that is attached to something ie.. Snowboarding, Skiing, shit Surfing. But know one can really tell the difference about beginner skate boarding bc the can just jump off the board. And this isn’t about if skateboarding is harder or less hard to do than rollerblading, bc they are just different and they ppl can go “Big” in either one. I just people would realize that its not like we are all padded up rolling around in a rink or at a park in spandex lookin silly… Thats all I got #TexasBlading

Great article, I like how you interviewed the creator of the video itself. Also I like how you showed the other tag lines that were used for similar videos. Good job ONE!

When Dan asked me for help i had no idea it was going to make such an up raw, Yes there are better skater’s out there, but we love skating good or bad skater’s its a life style. We are all smiling and having a good time. the filming and editing made the edit.

Hey industry owners, how about you have Dan edit your next video? Even I you already have someone who could do it, Dan already has an in with GoPro, and maybe next time it’ll have a better title. It would be pretty incredible exposure for your brand. 😉
With love,
Mike Falcone

My name is Andie Woodman and I work for GoPro in Social Media. And I can say without hesitation that, yes, GoPro does think rollerblading is cool.

We made an attempt at humor with that post because we know that sometimes our social media audience can be less than welcoming of content that is outside the core of action sports. We actually didn’t mean to belittle blading, but to support it. Our attempt to head off the snark was inept, and for that we are sincerely apologetic. Comedy is obviously not our strong suit. Lesson learned.

We hope rollerbladers will forgive us – and send us more blading content so we can showcase the sport more frequently on our social media channels.

Here are a couple of rollerblading edits featuring GoPro footage which you may not have seen yet Andie;

Thanks for giving us some exposure & support!

When Alex said that his friend wanted to shoot some skating, we were more than up for it. This edit Dan made is truly excellent and I never thought it would be perceived badly. It was a week for skating that week and the park we were in was less than a year old. Smooth as ever.

I’d love to see Inline in the spotlight again one day and it’s great that GoPro gave that opportunity! (even if the wording might look bad to some)

I used to make a lot of skating videos for youtube.com/obmhost as we were skating everyday for years on end. There’s over 500 clips of us skating there and it has always had a relaxed and casual atmosphere in park or street 😀

There has not been any animosity between BMX/Skateboard/Inline in our area in all the 24 years I’ve been rolling. We only have a small scene, but we love to Roll and that is the main thing!

I dont understand why bladers are so pissed about the fact that the post read “yeah, its rollerblading” because its true! Whos into it anymore, just be stoked its on the internet I guess? Just go have FUN on your skates! Dont worry about how others percieve you! If you are worried and your not having fun on your skates then maybe find something else you enjoy doing instead! OR learn to enjoy it, just my take.