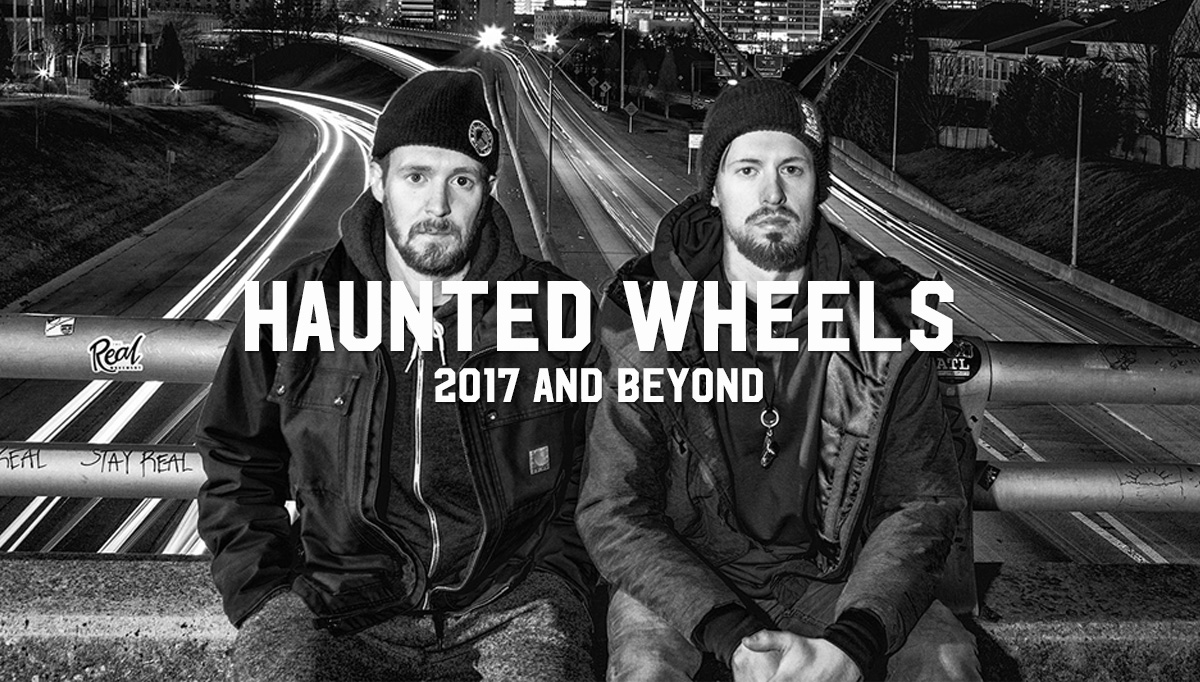 Haunted Wheels: 2017 and Beyond

Originally hailing from Michigan but now a fully diversified outfit, Haunted Wheels has pushed up from the dark corners of blading to carve out their own niche. Now with riders across the continent and the braintrust split between Mid- and Pac-West locales, the brand is ready to move into another phase as it looks ahead, surveys the past, and decides how to focus their efforts moving forward. Co-owner Matt Osantoski took time to answer our questions — so here’s the skinny on Haunted Wheels.

Hey guys, thanks for catching up with us, just in time for the new year — tell us when Haunted started and who all is behind it.
Haunted started in 2012. Me, Matt Osantoski, and my brother, Brad, are the heads behind the company. Brad runs a Portland-based video production company, Serenity Studios, so he handles most of the video aspects and built the new website. I handle the sales, social media, and product development part. 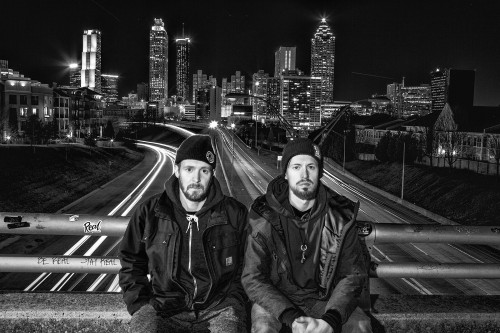 What inspired you to release your own wheels?
At the time, all my friends in Grand Rapids, Michigan were involved in their own creative projects. Adam Niemara was doing LOWLIFE, Scott Wymans was making comic books, and Tom Jenkins was creating a shit ton of art projects while screen printing, too. I basically got inspired by those guys, and they were down to help me launch Haunted. Brad and I have been skating and filming in Michigan for over 10 years, so I knew I could count on him. I didn’t want to have another softgoods company because we all see how those brands pan out in the rollerblading industry. So we thought making wheels would be the best way to legitimize the brand.  We also wanted to showcase some talented skaters that we really enjoy that may have gone more un-noticed if they weren’t connected to a legitimate brand. We have produced over fifty videos for Haunted over on the Vimeo page, including rider profiles, supporters, and good ole-fashioned session style edits. Give em at watch HERE.

How many lines of wheels has Haunted released?
The first team wheel, the Mikey Blair Wheel, Brian Weis Wheel, Cody Lampman Wheel, anti-rockers in the works, and a new pro wheel coming soon. So we have released four wheels total.

Can you tell us who pours the wheels? Have you always used the same supplier, or do you mix and match based on your needs?
Haunted has been with the same manufacturer since 2012. Since then we’ve been really juiced on the quality, and we have been using the best pour they have available for the last two wheels. I’ve been looking into another supplier to do a different sized wheel that our original supplier doesn’t offer, but they have been total dog shit about responding to emails or phone calls. So they probably will not be seeing any of my business.

Have there been any challenges you’ve run up against that you didn’t expect?
Putting out our first VOD Die High was definitely a new challenge, but super rewarding in the end.  Wouldn’t have done that project any other way.  We had to wrap up the VOD in Michigan before Brad had to depart to Portland to grow his company, so time constraints always blow.

What about something unexpectedly rewarding or positive that came from making wheels and developing a brand?
It’s just fun to create stuff with your friends. Whether it is screen-printing tee’s with the homies or freaking the fish at the local park. It’s nice to have a place for all the content. 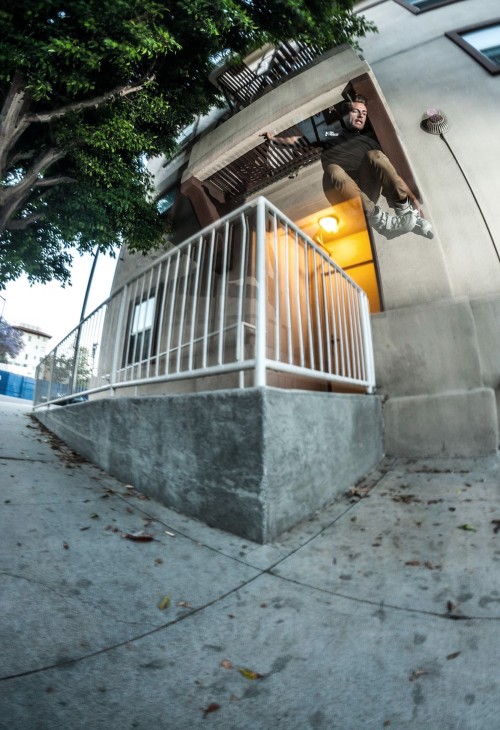 One of you is in MI and the other in Oregon, how has that diversification influenced the brand?
It’s rad because those two cities are so different and so far away. It’s still cool to work on projects with Brad even though he is across the country. And yeah, it definitely helps to make the brand more diverse and not just have Midwest content all the time. The dudes in Portland are sicker than shit too, and skate differently than the Michigan players. Not to mention that it’s been cool to watch Brad’s skating develop because of that.

Who all do you float product to, and what do you expect in return? If there’s a real team structure go ahead and break it down for us.
The four Horsemen are: Mike Blair, Cody Lampman, Garret Mitschelen, and Ray Kronenburg. These dudes are all down with Haunted and are homies, so working with them is chill. I don’t expect much but a lil’ online content once in a while, and a pro wheel edit if/when they get a pro wheel. The riders pretty much choose their own involvement in the brand.

What about their geographic distribution — that important to you guys or you just worry about the people and the rest takes care of itself?
Where they live isn’t important really. But all the dudes are pretty involved in their local blade scenes, which is important to me. I would never work with a skater who thinks he is too “exclusive” or would only skate with the local “pros”  or whatever the fuck that means. There isn’t room for pretentious people in skating, and that whole mentality is really whack. I enjoy small sessions with the homies for the most part, but I’m not above going to the local blade night and ripping with everyone. All the team riders seem to have the same mentality.

What does Haunted do to make themselves stand out against the competition in the small and challenging inline marketplace?
Haha, the inline marketplace is definitely small and challenging. I try to put out the best quality wheels available, some real sick limited edition softgoods once in a while, and a steady heartbeat of photo and video of rippers to get you hyped.

Looking around at your fellow wheel brands past and present, any that you view as influences or role models?
I really liked the attitude of Senate, and the image of Mindgame back in the day. I would love to have a full line of wheels and softgoods someday like they did, if the skate industry ever comes back, or if I rob a bank.  As for present day brands, definitely like what the dudes at DirtBox are doing. The Kelso’s just dropped their Bacemint VOD and limited softgoods and that shit was dope. Since Haunted is run by two brothers too, it is really sweet to see them getting involved. 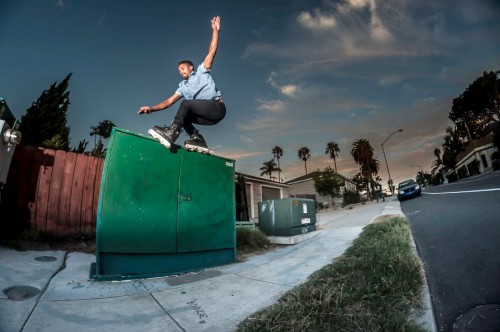 Anything exciting planned for the new year that you want to tell everyone about now?
Brad is currently working on a video project with the homies in Portland, might be a VOD might not, but that is gonna be like two years in the making. He is also working on a hardcopy Blade Photography book which will be available on the Haunted store as well as his personal website. We just finished revamping the website with a different URL. Go check her out at https://www.hauntedwheels.com. And working on that brand new Garret Mitschelen wheel with a brand new size that I think everyone will enjoy. Other than that, just keep your eyes glued to the Instagram feed for solid content of the boys.

Well in that case let’s let you guys get on with life — sign off with some shout outs and we’ll take it from here.
Hey, thanks again for the interview ONE! Shout out Brad Oz, the Portland scene, the Detroit scene, the Denver Scene, Ian Walker, Mikel Fatelli, Sean Macgowan, Adam Niemara, Scott Wygmans, Randy Molina, Ryan Cza, Zack Straight, Ivan Gwynn, Steve Durasa, Modern skatepark, Roller Warehouse, and Oak City. These dudes help make Haunted dope and it wouldn’t be what it is without their support.