By now you should know the name Isaac Parks. The Louisinana-born blader was living in Texas last year when we met him during the Useless Concepts tour, but since then he’s relocated to Denver and made new friends in the mile high city. Jeff Stanger caught up with the young Jedi to find out how the move is treating him and get an quick inside scoop on his recent contribution to the HVMVNGVS Mixtape project. Here’s what he had to say.

Your section in Hvmvngvs was incredible. What is your most memorable moment filming for the video?
I would have to say the most memorable moment was one night out on the town we met a true “X” man. Tripping, lost, and boyfriend-less, this large but graceful man put on a dance routine for us. Mid-dance he tried to jump on to this ledge and slipped, giving himself the worst double shinner I’ve ever witnessed. After all that he proceeded to ignite the rail and my dood Zach P laced up in the inferno. It was actually his opening clip for his Scumpire edit that Walk also made. 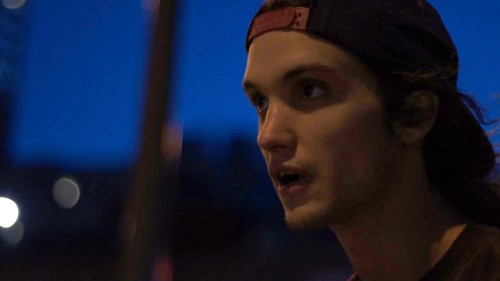 What do you think is the biggest difference between blading in Texas versus Colorado?
Awe damn, that’s a good one. I would have to say the main difference between Texas blading and the Denver scene would be my mentality. At least for me, blading in Texas was more for fun and any event felt like a family reunion more than anything. Shout out to my L$T Fam! Here, in Denver, I feel like I have had to step up and kind of tweak what I was doing before. The fellas I have been skating with here are really pushing forward and by association, so has my skating.

Who inspires you (in and outside of blading)?
I would say C. Kelso, A. Jacuzzi, G. Hyden and Farmer are my largest inspirations in blading. I have to thank Fallon Heffernan too for teaching me the basics, which feels like forever ago. Outside of blading, though, Zachary Carrettin all the way! He was my orchestra conductor in college. He used to be an amateur skateboarder then became one of the best solo violinist and the best conductor I’ve played under. That dood is killing it!

What is the one thing you want the world to know about Bagliq?
At night… WE RIDE!! BAGLIQ CLIQVE B•$H!!

Write up by Jeff Stanger

Other photos by ya boy