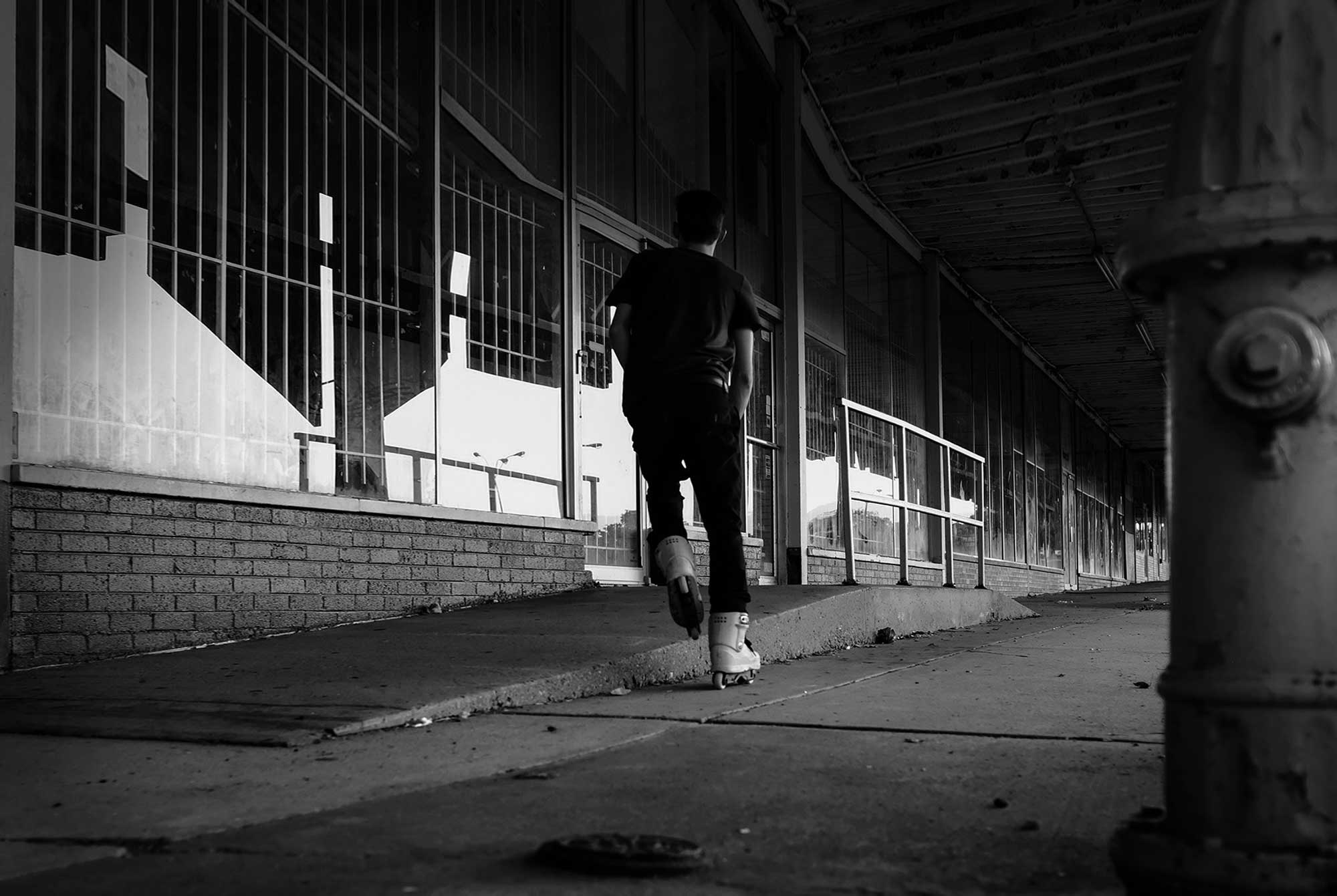 Luke Naylor and skaters like him are the “now” of blading. They represent what is happening right this minute, and will no doubt have an outsized impact on the future of blading because of their actions today. Winner of “Overall Points” in last year’s Blading Cup rankings, and a competitive force every time he enters an event, Luke is as talented in the street as he is the skatepark. Thanks in no small part to close friend and fellow Detroit-native Brian Weis behind the camera, those exploits are often captured with precision, and even led from an Am Hour in Issue #24 to full Spotlight in Issue #25. Possibly a first in ONE history. Read on to learn more about what he’s up to and how his latest feature came together.

Hey Luke, how have you been doing during COVID-19?
I’ve been staying busy. Just wrapped up my semester at college online, and been skating when the weather over here cooperates. Currently on unemployment, because my work had to shut down since it is all large groups of people eating dinner at a banquet hall. I feel sorry for everyone who has booked their wedding this year. I’ve been hanging out at my new place in Royal Oak.

Saw you got some new 909s. How you like them? Anything feel different from the 908s?
Yeah, got some freshies! They are great, very well designed. They have improved so much from the last model. Big ups to Jon Julio and Kyle Sola for creating a perfect boot. Couldn’t be happier with how they skate.

So I was thinking about this Behind-The-Scenes thing when something unusual hit me: you had a Am Hour in #24 and then a full Spotlight in #25. Had you thought about that? It’s not terribly common…
Yeah, actually, I felt like it was a form of progression in my skating career. I’m about to turn 25, I feel like at this age each year seems to top the last. It reminds me that I won Motor Town Classic one year, and the Windy City Riot the following year. It was all because of Brian, he is always my go-to guy to shoot photos with; he’s incredible at what he does, and he always keeps it interesting.

You and Brian Weis have made some pretty great images together. People went nuts for the Am Hour shot where you wall ride the stop sign. It looked impossible! Do you remember anything about that day or session?
The stop sign picture was a major struggle. The spot is on the Detroit Riverwalk right by Hart Plaza. We went in the middle of day and had to battle traffic, both people walking down the riverwalk and cars in the street. I had to make a hard-left turn and jump onto the ledge before jumping up to the sign. It seemed impossible at first, and frustrating to have to spend so much time waiting. I probably tried it at least 30 times before we got something we liked. I wasn’t going to settle for a one-footed wallride. Zac Straight was operating the flash, since he and Brian had to stand in the middle of the road while everything was going on. A lot of people were stopping to watch us and seemed stoked about it, nobody was reacting negatively. I was on the verge of giving up so many times, the level of frustration was high. We pulled through and laced it, so I was happy that it all worked out. Shoutout to Zac and Brian for making it happen.

What about working together again to shoot the photos that ended up in your Issue #25 profile — anything interesting happen while cruising for spots and making these images?
Last year we shot the photos for the new issue. The portrait was from Windy City Riot 2019, I got second place to Bladezilla. We skated this super gnar drop ledge and I fucked up my arm, but it was a blast. The annual trip to Chicago is always one my favorite times of the year. As far as interesting things that happened, we didn’t get kicked out of any of the spots in that interview. The royale to wallride was at the high school in Oak Park, the run-up to the rail was covered in rocks, and the cement was falling apart. If it wasn’t for Don Bambrick putting a sign in my trunk a while ago, I don’t think I would have laced. Now the pole jam pic and the front savannah are both spots in downtown Pontiac. Super shitty area, it was by this abandoned bowling alley, and we found it just driving around. It was amazingly perfect to skate, the only area in the parking lot that was clear of debris was the landing. The bank to yellow rail was across the parking lot in this run-down strip mall. The only open business over there was a laundromat that looked like a family operation. It was a strange place, it almost looked post-apocalyptic. The marble bank spot was in Saginaw, lots of lost gems over there. We spent a Saturday out there and we crushed it. Brian, Koda, and I all clipped up pretty heavy that day, and we even did a demo for Modern in Midland between the two street sessions. It was a good year for me, looking forward to shooting more stuff with Bweis in the future.

Last year you were really active in the points collection for the Blading Cup series. Were you planning to do that again before covid-19 derailed everything?
Well to be honest, I just happened to skate a lot of contests last year, I didn’t do it for the ranking system, but it was cool to be a part of it. I was planning on going to the same comps this year: Delta City Open, Windy City Riot, and King of Cleveland. I hope we re-open soon and that we are able to enjoy some of these events in 2020. I ended up with the most points last year, and Jon announced it at the Cup. I got a medal and a check which was super cool, and unexpected. I feel like skating needs stuff like that, it’s another way that kids can feel like what they are doing matters.

What role to contests and events have for you? You like them, or they are just sort of a necessary evil that goes with trying to be somebody in blading?
I love events and contests; they are always fun. But as far as being somebody in blading, you don’t have to win contests or anything. Being there is what matters, interacting with the people at the events that you otherwise would never hang out with. I think that filming parts is just as important as competing. I try to do both; I honestly get more satisfaction out of filming than competing. I will always be the dude that skates in the contest though, it’s part of who I am.

Royale to Wallride to Fakie

Ever imagine you’d leave Detroit, or you planning to call it home forever?
Yes, I think about leaving Michigan, and living out West. Michigan gets hit pretty hard in the winter, and it is honestly a cause of seasonal depression out here. I hate the snow and ice, so living somewhere with good weather year-round would be amazing. I would love to be able to enjoy street skating all year. My life in Detroit is good and comfortable, so we’ll see what happens.

Speaking of, where’s your favorite place you’ve ever visited, either for skating or something else?
My favorite places I’ve been to would be Northern California and Oregon. I stayed with Cody Clark in Oregon for a week and it was honestly one of the best times I’ve had out and about. The West coast is great and all but I want to see Denver, Atlanta, and Philly. They are all scenes that have great skating and I’ve never been to any of them.

What are you working on next?
Just stacking clips and photos in Michigan for now. Me and Hawke Trackler want to make a part this year. More than anything I want to go on a tour with the Detroit crew. I want to take two weeks off of my life and go drive across the country with the homies and make a video.

What’s the first thing you’re going to do when the world starts getting back to normal?
The first thing I’m gonna do is plan out some skating trips with homies. Looking forward to the future.

Thanks for the time, Luke! Keep up the great skating.