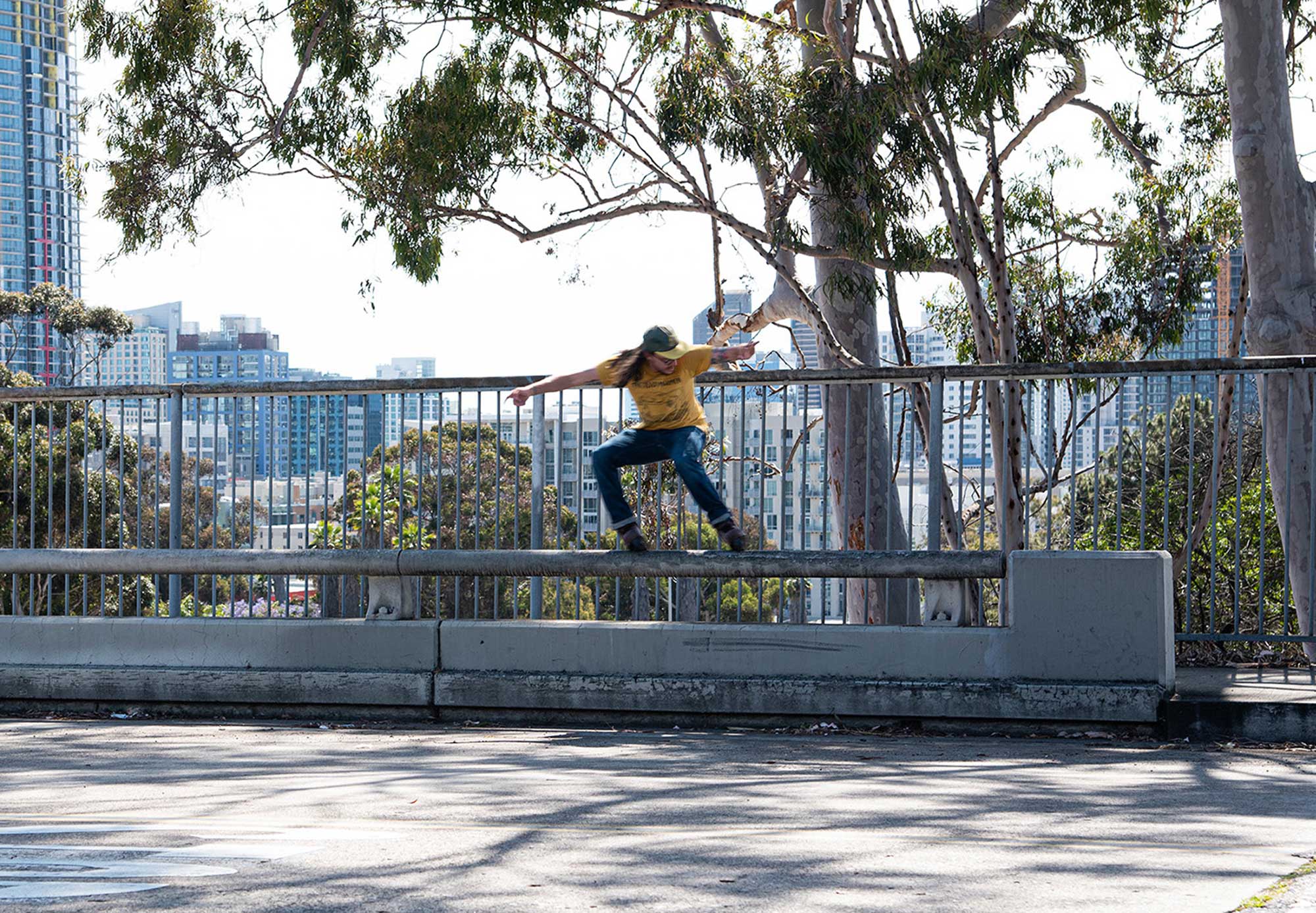 Issue #25 features a surprise and too brief appearance by Denver’s Jeremy Spira, after a fruitful day session allowed Sean Macgowan to capture a handful of prime images. Jeremy’s a member of the generation that skated through some of the best blading and hardest realities seen in our sport, and his list of videos and magazines in which he’s landed coverage over those years speaks to his talent and unique standing. Outspoken and with strong opinions, Jeremy has grown up in front of the blading world, now a father himself, juggling work and family and finding time to skater with the homies. In that regard, his #25 Spotlight is a love letter from his crew, as they worked behind-the-scenes to surprise Jeremy when the magazine came out. From what we learn below, it sounds like it worked.

Hey Jeremy, how have you been doing during COVID-19?
Not bad, really. I’m lucky enough to be able to work from home and have a job that wasn’t shut down. It’s been really great to be with my family, instead of normally being away more than 40 hours each week. We’ve really bonded together and kind of made a goal to focus on the home life, our relationships, cooking, gardening and general wellbeing, so it’s been good. It’s been hard not to see extended families or to chill with the homies, so looking forward to better times in that aspect.

So last year you hit me up about coming to San Diego, so we went out for a day. Ever think we’d turn that info a little feature?
No, you mentioned it might turn it into a website feature so I had no idea.

You can thank Jeff Stanger for that one, the surprised element was his idea. I thought it sounded fun.
Yeah, I was pleasantly surprised and glad I got to represent dad body positivity in a full page spread.

You guys were out here on a family trip — remember those?! — how was it?
It was fun. We try to do a trip somewhere new every year and were pretty fixated on it needing to be by a beach. Finding some AirBNB in Mexico was the original idea but we couldn’t get the twins their passports in time, so the next best thing domestically was SD. We found a good deal for a bungalow in Ocean Beach and hit all the tourist shit.

Before that, when was the last time you came out here? I think it had been years but I could be wrong…
I think the last time I was in SD was for one of the SDSF comps in Esco, maybe 2008. Sessy and I had just got married and we drove out with our new puppy.

What other photos or clips have you captured in San Diego? You had an old Revolution ad shot in Mission Valley, and then probably clips filmed with Damien Wilson and crew. Tell us about it.
There were many other road trips prior where we had passed through SD. Aragon and I drove straight from Denver to Haffey’s parent’s house in a single day to film a bunch of clips for KFC3 (AJ handed me $100 at a party in exchange for my “Aragon Tapes”). One trip we randomly linked up with Doug Urquhart, Montre, and Kenny Owens, who were doing their own road trip filming Montre for Black Market. Doug filmed me jumping off the ledge to rail at Balboa Park that ended up in Black Market. With James, we’d always stay at Damien’s in Santee, which was always insane. The Revolution ad was a fun night. We drove over to meet Wes Driver and I got to meet Jon Elliot for the first time which was a big deal for me. Wes suggested a spot in Mission Valley that was pretty popular, but he said no one had gotten a photo on the ledge, or one at night, and that was that.

Looking back, did you ever do, or not do, something in skating that you regret? Like, wonder how things would have turned out if you’d made a different decision?
I used to struggle a lot while going to college and at the same time trying to make a career out of skating. I was filming and traveling a lot, and it really hurt my grades. By my third year I was like, “I either need to drop out now to focus on skating, or get serious about school” and school eventually won. Looking back, I think it was the right choice. I think it also helped take the pressure off having to skate at a certain level and put out so much content. I was just able to have fun and fall in love with it again.

How do these days and this era of skating compare in your mind to the period when you were hungriest and on the come up?
I mean, just skating wise, I think that there are many people doing some of the most refined, dialed, and stylish skating that there has ever been. Now I skate with people who are 10 years younger than me who are incredible skaters, but rather than being obsessed with sponsorship or competitively like I feel like my generation was, they seem to mostly just enjoy skating and the camaraderie that comes with it. It almost reminds me the first Battle My Crew days, when I was looking up to all the hometown heroes and wondering why they weren’t pro. I’m just on the older side of it now.

Imagine some skateboarder who hates on rollerblading showing up at Blading Cup, putting on blades, flailing around the park and yelling at people to do backflips, winning the comp because all the Rollerbladers got discouraged and stopped skating… That’s you not voting 😉.

There’s people right now online arguing about if skating was better back then or now — anything you’d say to those people?
Isn’t that what nostalgia is? It’s just dudes that can’t cope with their overwhelming nostalgia. If you were in the middle of that moment and then left, of course you would feel like that was the peak. People were saying that we would never reach that Brain Fear Gone peak back when Aragon, Broskow and Haffey were still adding extra 360s to tricks and fakie 720ing El Toro. There will always be those people. For those of us who never left, we know where the scene is and where it came from, and that we don’t even need to go there.

How about as the country steamrolls towards an even bleaker future; anything you want to say to anyone out there that thinks US politics doesn’t effect them, or considering not voting in November?
Voting is literally the simplest thing you can do to affect change in this country. Everyone should vote but it really shouldn’t end there. The reason people end up not liking the choices on their ballots is because that’s usually where their involvement in politics begins and ends. The reason your best interests keep losing is because those who have your worst interests at heart work harder than you at fucking you over. They are pros at fucking you over, in fact. The sad part is they don’t have to work very hard, because 1/3 of this country doesn’t bother to vote. Imagine some skateboarder who hates on rollerblading showing up at Blading Cup, putting on blades, flailing around the park and yelling at people to do backflips, winning the comp because all the Rollerbladers got discouraged and stopped skating… That’s you not voting 😉.

Anything you want to add or any thanks you want to spread around?
I’m just extremely thankful to have an amazing family and good group of friends to blade with. I hope everyone is hanging in there, and that they know they can always hit me up for anything, anytime. ❤

Well thanks Jeremy! Hoping that you and the family stay healthy and safe, and that we end up where we all need to be.