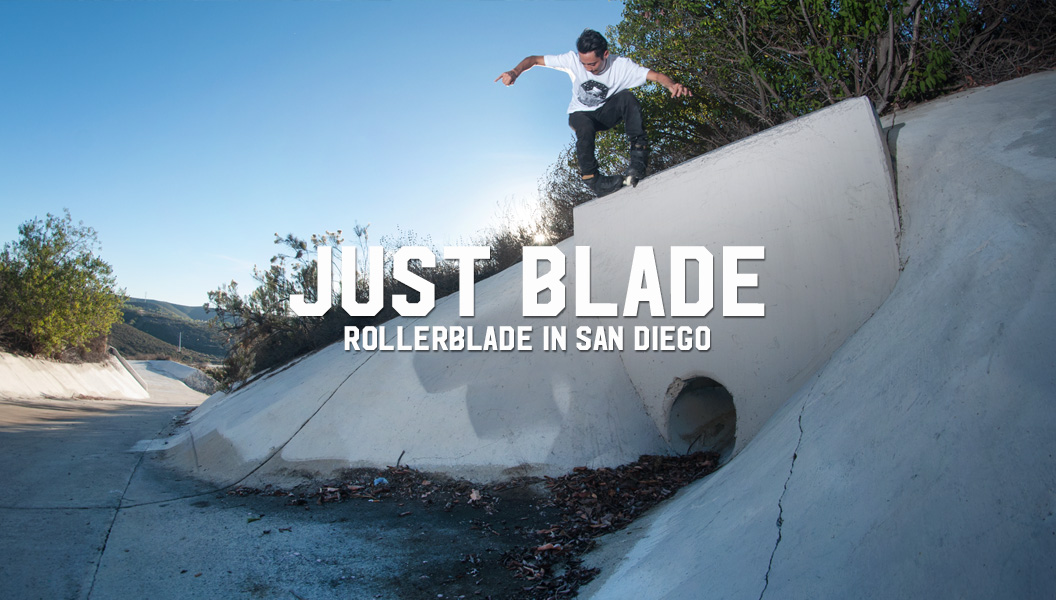 Nearly one year ago, just after Blading Cup 2016, Cameron Talbott dropped me a line like “Think me and Sean could get some pics and clips if we came to SD after the Cup?” As you know from Issue #23, a bunch of photos on Instagram, and the section we filmed for JUST BLADE, the answer was a resounding YES! So for three days in November Sean Keane, Cameron Talbott, and Sean Macgowan and I prowled San Diego for interesting spots. Thanks of course to Chris Couture and Logan Fowell for the prime hook ups that wasn’t as hard as it cane be, now sit back and watch two of today’s most talented bladers put our town through its paces. 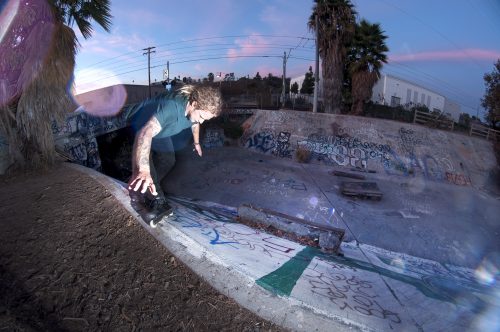 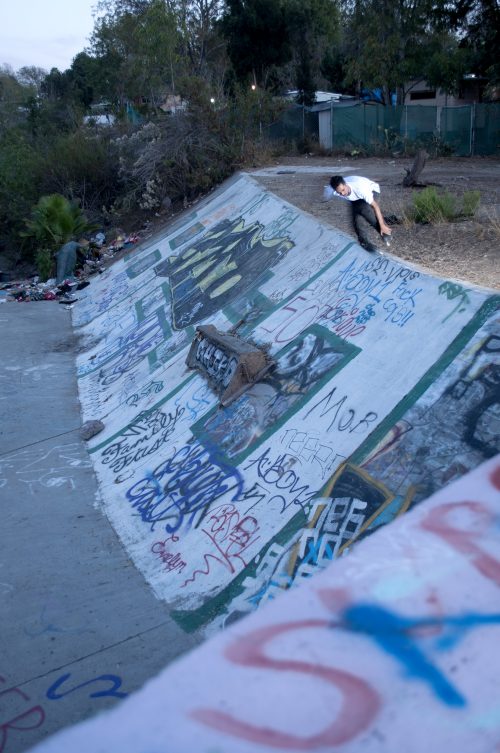 Blading Cup 2016 was on a Saturday, so it was Sunday afternoon before Sean and Cameron were in town and everyone was booted up at a spot. For this outing Chris Couture offered up one of the local ditch gems that he’d discovered while working on The Ditch Project earlier in the year. Before the sun set Sean and Cameron and Chris managed to put together some maneuvers on this tricky piece. It’s a distracting place, with trains whizzing by at the top of the left bank, and planes coming in low on landing approach for Lindbergh Field. But day one nabbed these two shots and a few clips, so overall a success. 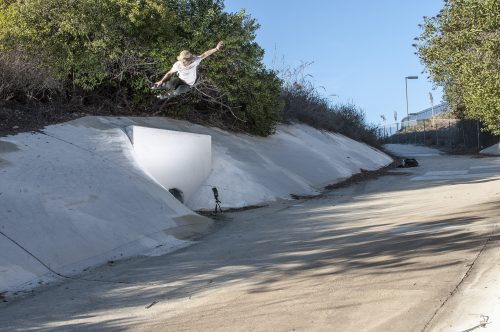 Some people use sick days for hangovers or heading to a powder day in the mountains, or ever actually being sick. Some of us save them for when out of town homies come to film, so that’s what Monday was all about. Ironically, Sean Macgowan had a job interview for a gig he’s long since moved on from to greener pastures (and using his advanced degree even. Did you know “McCroskey” has his masters? Well he does.) so Keane and Cam and I didn’t want to get too serious before he could meet up. Instead we did a chill breakfast in the ONE HQ downtown hood near the hotel room RB booked for their traveling pros, then headed to Chicano Park where the city turned a longtime local skate spot into and actual skatepark where we filmed this little edit while waiting for Sean.

When we finally did all end up the same car it was time to head to the hills for another spot from the Couture Ditch Sessions, this time a prime downhill to bank to ledge over channel that really does make for a pretty picture. While there Sean got some grinders across the ledge and Cam did some creative “Cam stuff” like he does. As we say in the print story, it was funny because we thought everyone wanted to skate a ditch so we did this out-of-the-way mission only to find out that Sean was like “Eh” and Cam was the motivation. Ha ha. So we skated some street later that night where Sean got a piece for print and Cam got a night shot we posted on Instagram. 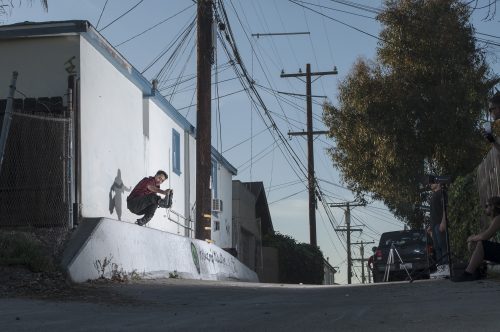 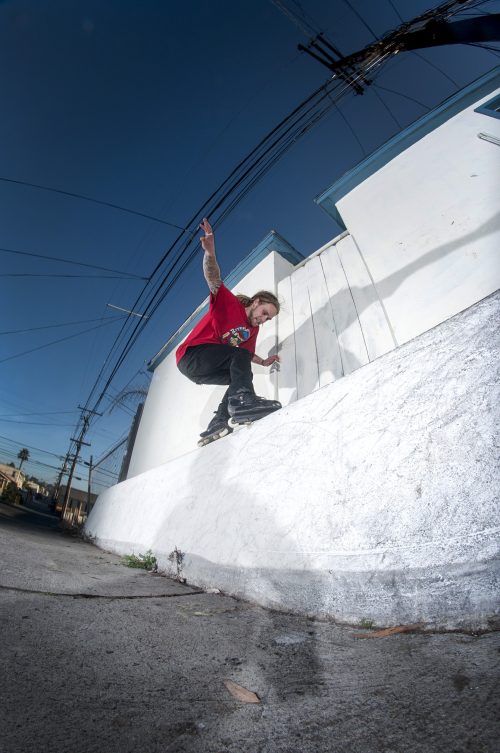 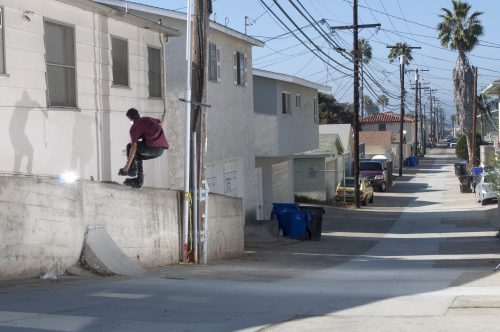 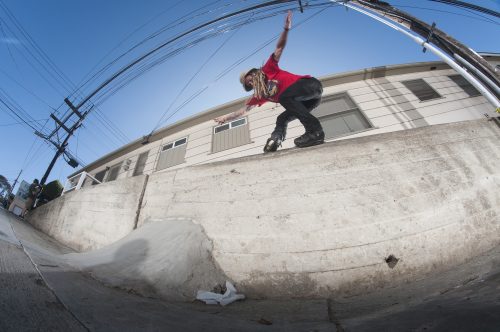 Tuesday was the day. The last day, and dammit it was one for the ages. With pages in Issue #23 to fill and hopes of making an edit, there was a touch of pressure on the spots working out and the day going smoothly. And hot damn, it did!

With tips from Ocean Beach local Logan Fowell we headed to the beach for lots of sun (and the last drops of light as the sun set) and a list of deals to be done. From alley to alley we found one transition to ledge after another before ending the day at a surf-side kinked rail you can see in the mag, and Sean getting rowdy with an apartment complex sign — including the intense interaction with Average Joe Hero who was pretty serious about defending his property. Guess we’re lucky Trump was still hours away from taking the “W”, otherwise this crazy asshole might have felt entitled enough to do worse.

But that was it! One last day of good fortune (a nice change from this project with Cameron) brought the RB Tour to San Diego to a close with enough materials for this little web feature, tons of online promo, the feature printed in Issue #23, and of course the section we put together with all the footage.

Thanks again to Keane and Cameron for coming to town and shredding the spots, to Tom Hyser and the Rollerblade family for financing the boy’s operation, to McCroskey for being the blunthouse he is, and to everyone that’s picked up the mag, downloaded JUST BLADE, or shares this article for all the homies.

All photos by Sean Macgowan