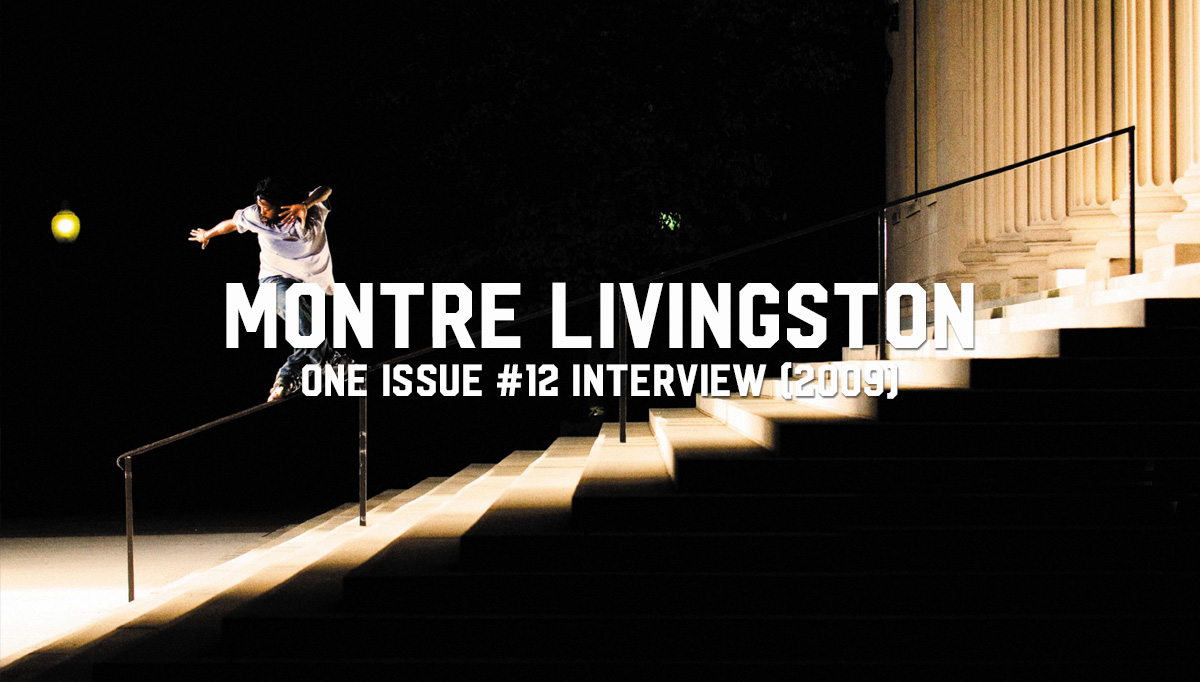 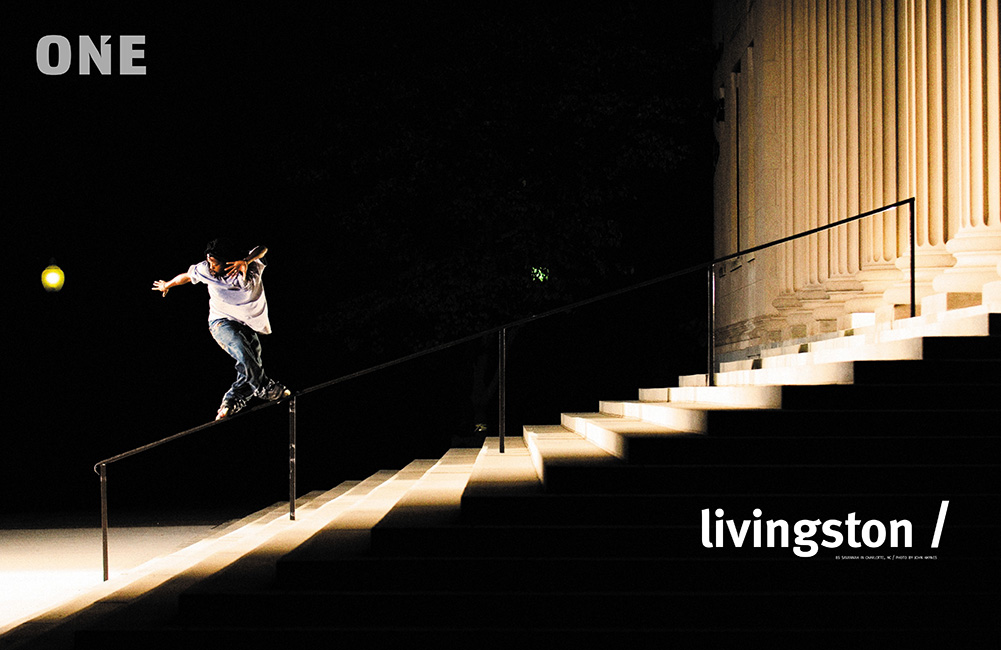 These days Montre Livingston is one of the most celebrated bladers on Earth. Rightfully so! But back in 2009 he was still an emerging talent that had just landed the biggest score of his career when Brian Shima hand-picked him for the then-burgeoning Nimh. To capture Montre ripping in his natural state, we sent long-time contributor John Haynes to Charlotte to shoot the pics for this interview. Turns out that wasn’t a pairing for the ages. But what we did get was a batch of hometown stunts by one of the most exciting bladers of our generation. So dig into this interview from ONE Issue #12 to get a taste for that sweet, sweet nostalgia.

For Montre Livingston, this christening into to the rollerblading industry was merely a matter of being at the right place at the right time. Now he is in the exact spot any dedicated and (extremely) talented rollerblader deserves to be, the top. Nonetheless, he seems unphased by all his recent rollerblading attention, but I know deep down inside Montre is cutting back flips. He knows he is the future of rollerblading and the leader of the new school, handed to him directly by Brian Shima and Jon Elliott.

Don’t mistake the hype as that — hype. It took a lot of hard work for Montre to get where he is now, but he treats it more like vacation than labor. He played his cards like the rebirth of cool, and look at him now. This time last year Montre’s only sponsor was Denial — a lot has changed in a year for him. When I ask Montre about his current opportunities all he has to say is, “I don’t know, I just like to skate.” —Kenny Owens

Hey guys… sorry for icing you so hard while I got this set up… but anyway, I’ve got some questions we compiled from a couple of your sponsors and people who’ve crossed your path, so I thought I’d just throw ’em your way and let you say word. 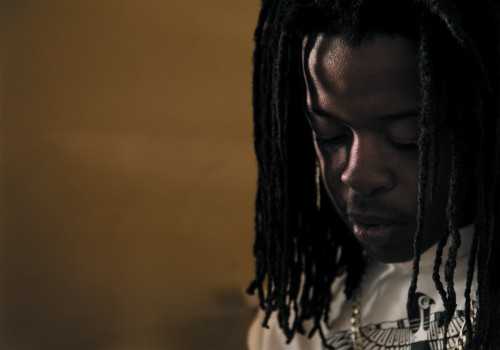 That is what he does. And I’m gonna remind both of you to talk really loudly so we can hear it.

All right Montre, first question: Can you talk about growing up in the Carolinas, and how that influenced your skating?
Basic living area… nice and country, kind of… not really. It’s pretty city-living near me.

You’ve always been in Charlotte?
Yeah, this is my spot.

All right, so are you saying it had no influence, or it had the total influence?
It had all the influence I needed to have, I guess. I had the right people to meet and start skating with, and that’s when I was just, you know… there’s still more skateboarders though.

Kenny Owens: It doesn’t hurt having a pro skater in your city. You know, seeing Dre skate, influence in that regard…

For sure, which goes into my next question — Kenny, spoiler alert! — some people might kinda sleep on how many great skaters there are in the Carolinas. Kenny-spoiler-alert-3000 mentioned Dre, but there are some other ones, like Will Gordon…
Sickest style. 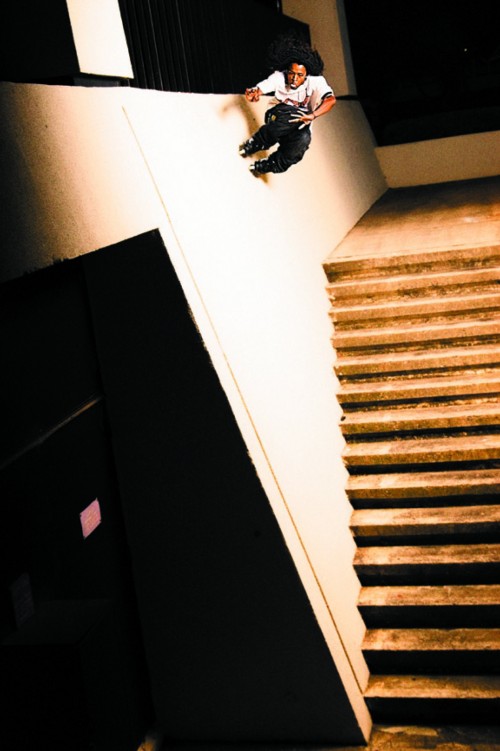 For sure! Beside maybe Dre, who were your influences there locally that got you skating?
That’s kinda hard to say. When I started skating here I was skating by myself. Around a year after I started skating I met Kenny, Dre and my friend Phil Gripper, my friend Joe Dobson, Aaron Smith — white kid, pretty much my brother — I dunno, we didn’t have that many people but it just always came together the way it should have.

So maybe it didn’t have a lot of people, but it had the right kinda people?
Yeah. There you go.

Having skated in Charlotte and kicked it with you guys there I’ll attest that that’s the case. Kenny, who did you paint that ledge with a couple years ago?

KO: That was Joe. That was before we knew about the easiness of the rub brick… (laughing).

It worked out, though, right?

KO: Yeah, it was a good spot, in the park. It worked, too, for a long time, until they built a condo there. 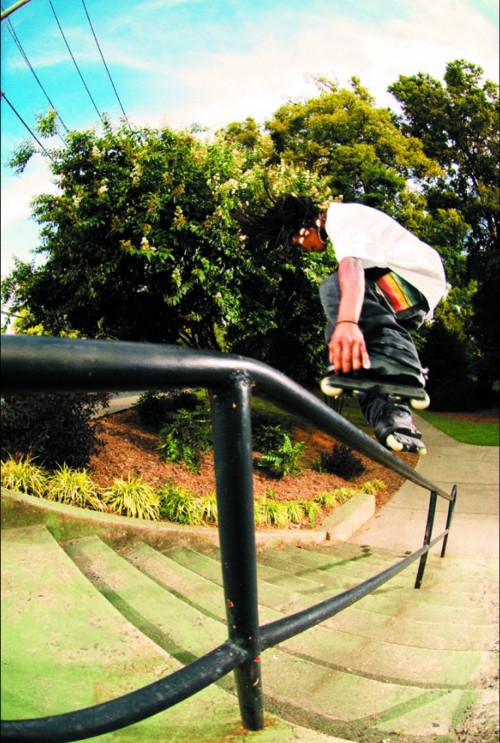 KO: And then Montre found out the guy was a child molester!

Was he really a child molester? Is that just a joke?
We really think it’s true. We had some friends that stayed at his house randomly and said there was some touching on them when they were sleeping or some shit — I dunno, I wasn’t there…

Wait, was there a day when you actually decided to rollerblade and not skateboard anymore?
Yeah. It, I chose… when I met Kenny and Dre I was skateboarding and sponsored, blah, blah, blah, but not going anywhere with it. First time I met them (pointing towards Kenny) we went to Atlanta. I was like, “Whoa.” I’d never been to Atlanta before, blah, blah, blah, this is taking me where skateboarding isn’t. And that’s how that happened… and it’s way better, obviously. (Smiling)

Boom! Nice. Here’s a good question: Having a few sponsors, who are they and why did you choose to skate for those companies?
I’m sponsored by Denial clothing, big ups! I’m sponsored by Nimh, everybody should know that, that’s the best company in the world right now. 4×4, Skateshoponline in Orlando, and I think that might be it. Oh wait, and can’t forget Jug. I’m sponsored by Jug. 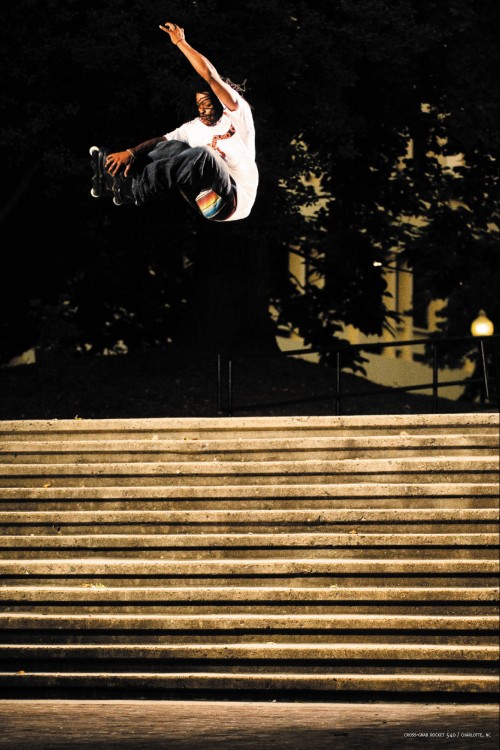 Is that a new development? You got the new Franky shoe on your feet?
That is the latest development… and I got socks on my feet!

You mentioned Nimh, and by now most people know Brian Shima handpicked you to ride for the company. Can you explain what it was like to be put in that position?
Just like this (wilds out). It was the most exciting time of my skating career… if I want to say that. It’s Brian Shima… I dunno what to say, it’s Brian Shima. He knows what he’s doing; he’s the man. I’m gonna bust my ass for him.

What was it like to be nominated and win Rookie of the Year by the RFCC this year?
Amazing. First off, I’d like to say thanks to Nick Wood, because no one else knew the results to that. You’re the man. Pretty amazing, I guess.

I know you’re from a real big family, and a father yourself, how supportive are they of your skating?
My family gives me the most support out of anybody. I dunno, whenever I’m going anywhere they ask me to call them the day of the competition or whatever to wish me good luck…. They’re the shit. My family’s the shit. 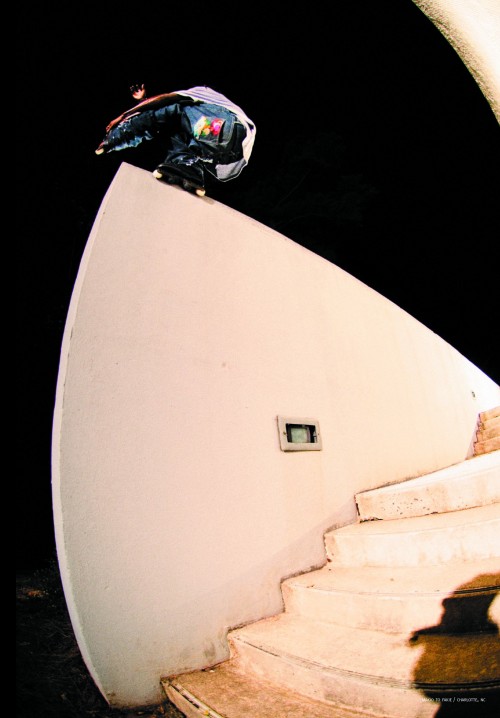 Good, they should be! Do you have a favorite trick? I’ve seen you do a lot of misty flips…
I hate that trick.

So what’s your favorite?
I dunno… true top soyale… maybe an alley-oop soul. I like those more than anything else, I guess.

Okay, so what are the key ingredients to a good alley-oop soul? From, like, a style perspective or whatever… is it the shoulders?
Yeah, you gotta have that window open (motions with arms), you know what I mean? That’s probably the tightest thing about it.

All right, here’s another submitted question: Would you give up Jah for Jesus?
Neck. Neck. Who asked that?!

I dunno, it’s anonymous! Jenn’s laughing over here, so it must have been someone at the Rat Tail office.
Why would I give up Jah for Jesus? I can’t answer that (laughs). 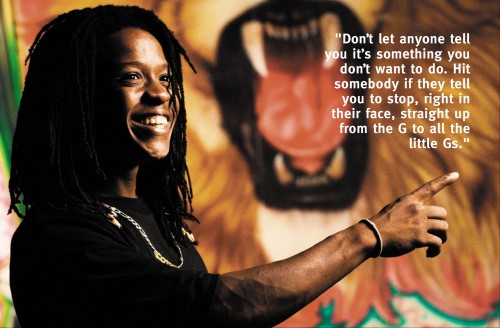 So you guys already working on “Say Word 4”?
KO: Yeah, I just got back from Japan and Cali, try to do some more places… hit up Europe. We’re gonna be in Atlanta more, get it a section in the next installment. Try to get some stuff outta Jim Roberson in the Carolinas. Just do something for the South to get back on the map.

You should have been there last February, dick. You and I woulda had beers in Germany and Austria! Instead, you missed your flight and I got your Nimh hoodie.
Oh, you got that! That’s not even funny!

Don’t worry, I’ve still got it man, I’ll be happy to kick it to you… besides, Joey stole Jenn’s, but we’ve got his leather jacket. So it’s all even, right? But we’ve been going at this for a minute, so I think we can wrap it up. Thanks Montre for getting up with Kenny to do this, and thanks Kenny for setting this up, and thanks Rachel for letting these guys use your computer. Anything to say to the kids, your fans?
Yeah, I got something to say. You’re bored — buy a Kendama. That don’t work? Keep skating. That don’t work? Skate anyway. Every rollerblader out there, keep skating. Don’t let anyone tell you it’s something you don’t want to do. Hit somebody if they tell you to stop, right in their face, straight up from the G to all the little Gs.

Order a print copy of ONE #12 HERE

For Montre Livingston, this christening into (to) the rollerblading industry was merely a matter of being at the right place at the right time.