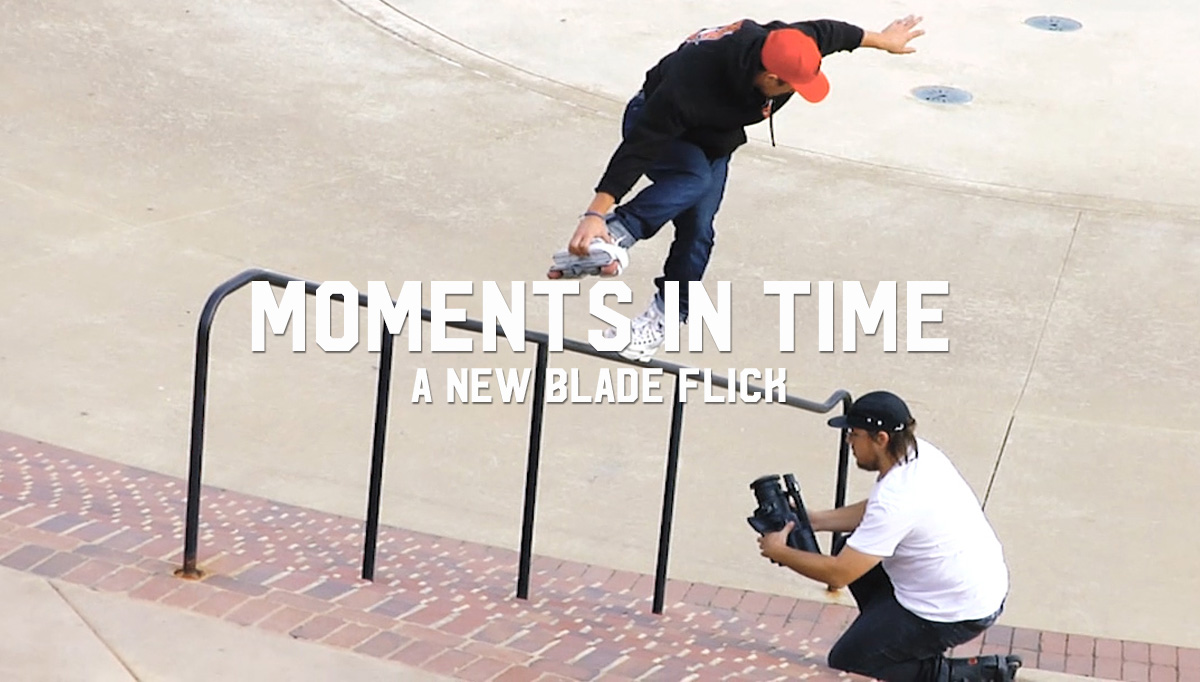 Out Now: Moments in Time

Spanning from Georgia to San Diego, Brandon Anderson‘s upcoming VOD project “Moments in Time” is more than two years of filming brought to completion in one full-length presentation. Featuring sections on Josh Appleton, Ian Freunscht, Ryan Timms, Evert Lubja, Patrick Andersen, Adam Bazydlo, and Jon Fromm plus a slew of familiar names stretching across the country, “Moments” is set to drop this weekend on Sellfy. We caught up with “Branderson” himself to get the lowdown on the project to pass on to all of you. Now take a breather and learn about these “Moments in Time”.

Brandon, let’s start with something easy — how many blade videos have you filmed and put together?
This will be my second full-length release but the first major full length project I’ve worked on. My first project was titled Thumbs Up but was just a fun Youtube project where I utilized a feature on Youtube so I could have a fully functional DVD style menu system. I put that together with Casey Wilson and Riley Hilsman, along with a few montages with a bunch of homies. I recently heard Youtube removed the audio from that project so I’m kinda bummed on that, but nevertheless I had a good time making it!

When did that start?
Thumbs Up released back in 2012 and I think we started gathering clips back in like 2010. 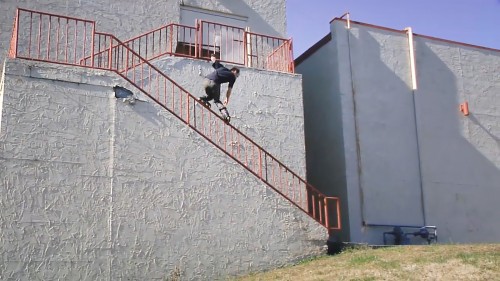 What or who are your major influences?
I gather my inspiration from a ton of different places — I try to watch anything having to do with action sports, but it also depends on what I want to create or the feel I’m after for an edit… so my influences change from project to project. I’m always enjoying work from Chris and David, AJ, Jonas, Dom, the Borklyn Zoo dudes, and more.

How did Moments in Time come together?
One day we were skating and I was just filming clips with no real purpose. I got home, imported them, and realized that I hadn’t made something I was truly proud of. Jon had just moved here around that time and Adam had just moved back from Chicago. So I was working on Jon’s Atlanta part, Adam’s USD part, and throughout the filming of both of those I was stacking clips with Patrick Andersen, Josh Appleton, as well as some other dudes. Ian Freunscht came to Atlanta to skate a contest and I dug his skating a lot so I told him I’d love to come to Texas to film him and we made that happen. Then Jon’s Atlanta part dropped, Ryan hit me up wanting to make an edit, and I was like you should just do a section for my video I’ve been working… on so that got locked down. As for Jon, he said he really wanted to do a section but was looking for other jobs outside of Atlanta and didn’t want to confirm anything. Fast forward about a month from that conversation and he’d gotten a job in Cali and told me he was down to work on a part. For the rest of the video it honestly just worked out with no real plan after I confirmed the main sections. 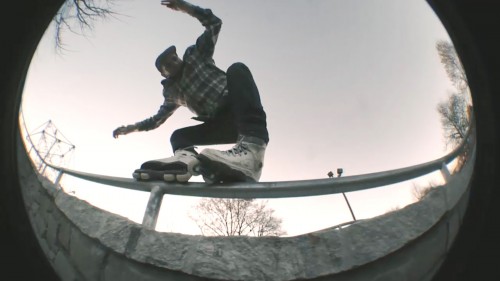 Who all is involved with the project, not just in front of the camera but behind it too?
So many people have been involved in this thing it would be impossible to name them all off the top of my head. Main Sections include: Josh Appleton, Ian Freunscht, Ryan Timms, Evert Lubja, Patrick Andersen, Adam Bazydlo, and Jon Fromm. Russell Day really came through and got a bunch of deals that I’m hyped on. Patrick Andersen really helped with second angles and Jon helped me with costs.

What kind of traveling was necessary to get this completed?
Traveling was the hard part and the piece that I feel I could have put more thought into. When I realized that Moments was spread out from east to west I was already beyond committed to the project. Moments in Time was filmed in North and South Carolina, Texas, Florida, California, and all over Georgia. There were multiple trips to all the main states involved. So, managing that and making it happen got very complicated at times. 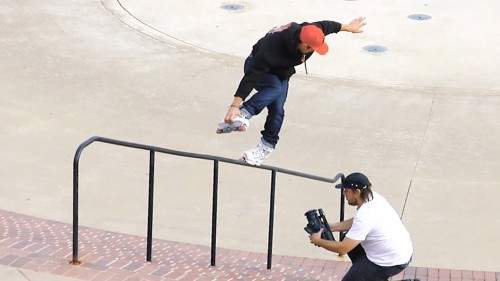 Tell us a story about overcoming a challenge or difficulty during filming.
The first day I got to California to film with Jon, we were at the first spot — of course Jon’s lacing his tricks without any hiccups because he can do that somehow. Anyway, as we are wrapping up and grabbing our stuff to head to the next spot I grabbed my fisheye by the lens cover like a rookie and it fell directly on the bubble. Perfect considering I still had like five days to go on the trip. I tried that night to order one for overnight delivery but everywhere was sold out so I had to deal with my mistake for the rest of the trip. I’m still kicking myself for that one. Luckily when I got back to Atlanta I saw that Phil Moore was selling a fisheye, so I snagged it. Only a few clips of Jon and Russ suffered the chipped glass effect.

How does music selection work with your productions? Do the skaters have input or do you make the decisions yourself?
I’m open to the skater picking the song but typically I try and find one that matches whoever the skater may be and then present it to them as an options. If they don’t dig it we move on and try to find something else we can agree on. It makes the process easier for me because I like to find the song before I start filming. I personally feel like the song is the foundation to a project and if your foundation isn’t solid then your edit will seem off. 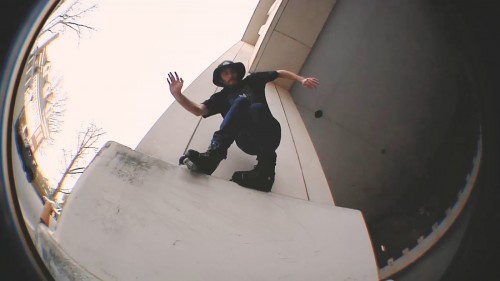 What was the easiest section to get put together?
The main montage was definitely the easiest, it really just fell together.

The hardest?
Jon’s part was definitely the hardest. With him being on west coast it took a lot to make his part happen. I had to fly Patrick out there to help him get clips. I got a plane ticket to come out out to San Diego. Jon came to Atlanta two separate times. We both went to Florida to work on it! He had to get multiple people to help him film it. Specifically you, Justin. We worked hard to make it happen to say the least.

How do you define success when you’ve wrapped up a project like this?
Just having a final exported version that I’m able to watch all the way through is the greatest feeling in the world! 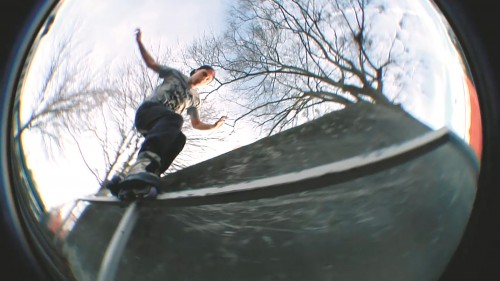 Similarly, how do you juggle real world responsibilities with working on a committed project like Moments in Time?
I’m still trying to figure out how I managed to do it! Working a full time TV job and balancing a blading video kind of feels like I’m living a double life, haha. I work for a bail bonding company and we produce a reality tv show following true reality bounty hunting with no script, so I go out two times a week and risk my life filming them catching criminals. Then I go back to the office to piece together a show, get off work, go home (sometimes at midnight) to film or edit blade content. It’s an insane schedule but I love what I do so that helps make the workload feel less like work.

Any words of advice for burgeoning videophiles?
Believe in what you’re making. If you don’t believe in your idea nobody will take it seriously. 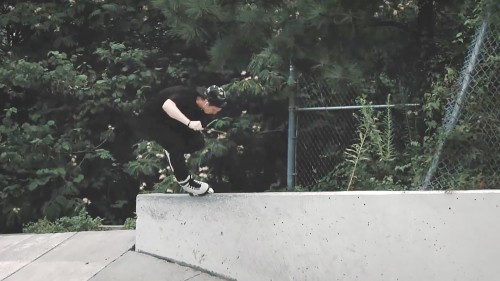 And… I’ll let you wrap this up with any final words or thoughts you want to get out there!
Thank you, ONE, for taking the time to do this interview. I’m splitting the video profits amongst the dudes that put in the hard work to make it happen, everyone involved really poured every last ounce of sweat to make this thing a reality. Hope you guys enjoy it! Cheers!!!

Thanks, Brandon — good luck with the release!