Back in 2017, after the dust had settled from Blading Cup, another batch of out-of-towners found themselves in Southern California and decided to see what kinda blading San Diego had to offer. The year before we’d done the honors with Cameron Talbott and Sean Keane, but this time we had a more international crew make the trip. It turns out that Nomade Skateshop from Paris had sent their team to the States to hit the comp and make a tour video, and that’s how we ended up blading for several days with Antony Pottier, Warren Digne, Adrien Anne, plus special guests Stephane Mosslemans and Grazyna Wratny. And when all was said and done, we had managed to make a six-page feature in Issue #24 and a full section in JUST BLADE 2. So check out this preview, then see more in the VOD and print mag — both available now!

Believe it or not, we never took a group portrait of the crew hanging out, so Warren was able to lend us this group selfie to prove that, yes, they were here in SD and we bladed. 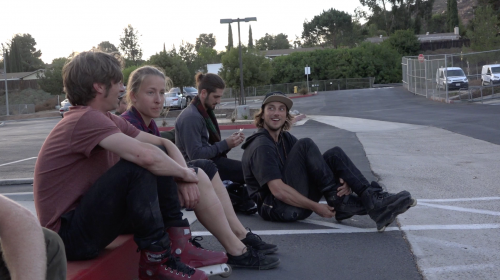 But here’s a screen cap from JB2 highlighting the good vibes of rolling with this crew. Everyone just chilling in Poway after Stephane grinds the high-ass loading dock.

Okay, so this ditch has been overexposed to the world, but then again it is a pretty special place. Like, just look at that spot! We took the crew to this spot and everyone got tricks, including this stylish piece from Adrien.

Antony Pottier is capable of skating anything and making tricks where other people see limits… and this spot was no exception. From grinds to cess slides down the bank, to this bank to wally to fakie, his athletic blading was on display everywhere we went.

We’ve filmed at this ditch a few times, but it never seemed like anyone would grind the rail and jump into the steep bank… until Warren Digne visited and did exactly that. Thanks to a little rigged launch ramp he was able to get up on the rail and make this thing happen.

We mentioned it earlier but here’s an example: Stephane Mosslemans can jump real high. He hit a fishbrain to fakie on this for the mag and video, but this Topsoul from a different angle captures the difficulty and Russell Day’s smile in the background.

Want to see more? We got you covered…