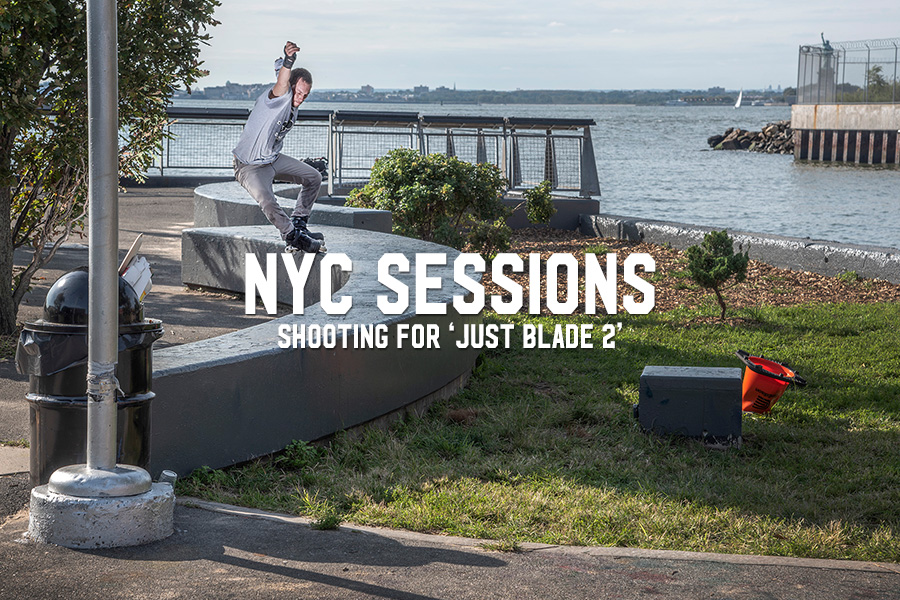 Written by ONE Staff - Published on Tuesday, February 5th, 2019

During 2018, ONE made two trips to NYC to work on JUST BLADE 2. Staring in April and wrapping in October, each trip brought together a different cast of characters, and propelled the action into a different part of the city. What started with Austin Paz, James Perez, Mike Torres, and Justin Brasco ended with Austin and Perez, plus Jesus Medina, along with Chino Sin and Jordan Baez from the Ghetto Community crew. Though he wasn’t along in April, the fall trip included photographer Sean Macgowan, who was able to capture these images as we neared completion of our latest video project. 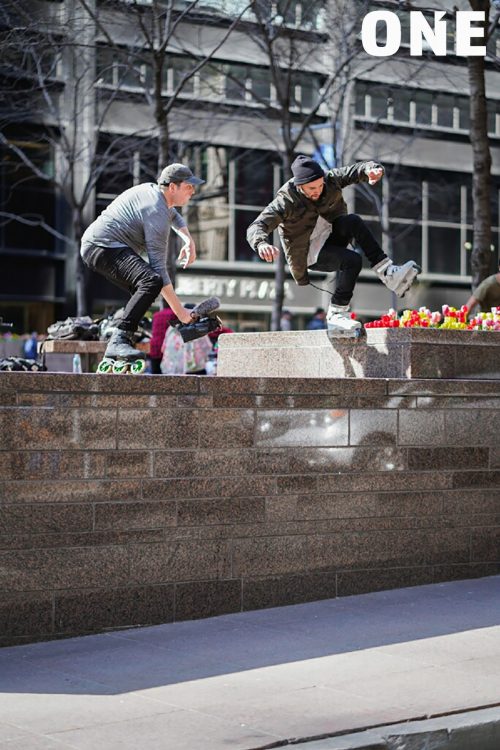 OG legend Jon Ortiz snapped this frame while we bladed midtown Manhattan in April. It took Justin a few tries to time traffic and the stoplight to make sure he didn’t land right into a car. But he made this negative makio to drop look easy.

During our October session we only got to skate with Austin for a day, but it was pretty awesome because we took the ferry to Staten Island then he showed us around. The last spot we hit was this rail to gap over rail at a school. A straight-forward clip took awhile to lace, but in the meantime we met the nice guy working on dunking at the basketball court, and then met a dad and daughter duo playing hoops on their own. Turns out dad was an old blader and rattled off some old NYC names that Austin knew from the past. When the trick got done we said it was for dude, who was from Bensonhurst.

Back in April we met James Perez as he blessed a session with his gritty, NYC steez and tech combos. In October he came out to Red Hook for a day to get a few sunny day clips, including this long front torque 270 out. We look forward to filming with him more!

After the Red Hook session we ended up back in Manhattan, where we hit the LES and caught up with the Ghetto Community crew. These guys are awesome! Jordan Baez knew everyone in the hood and had a plan for everything. Here he laces a switch up for both cameras.

During our time in the LES with the Ghetto Community dudes, Jesus Medina got some tricks in on the angle iron ledge. This styled-out Savannah took top honors.

So when we roll up to this spot there’s a whole mob of skateboarders sessioning the gap, trying to get clips. One dude is trying like triple kick flip and not coming close, others are filming. Chino and Jordan took over the spot like the owned the place — cuz they basically did.

Okay, so we’re cheating because this wasn’t the last photo but it’s one of our favorites… First spot off the State Island tram was these weird structures that we’d seen Austin and Billy skate before, but we were both surprised when Austin put himself through the paces to land one of these roll up to alley-oop top porns as clean as he wanted.

Want to see more? We got you covered…