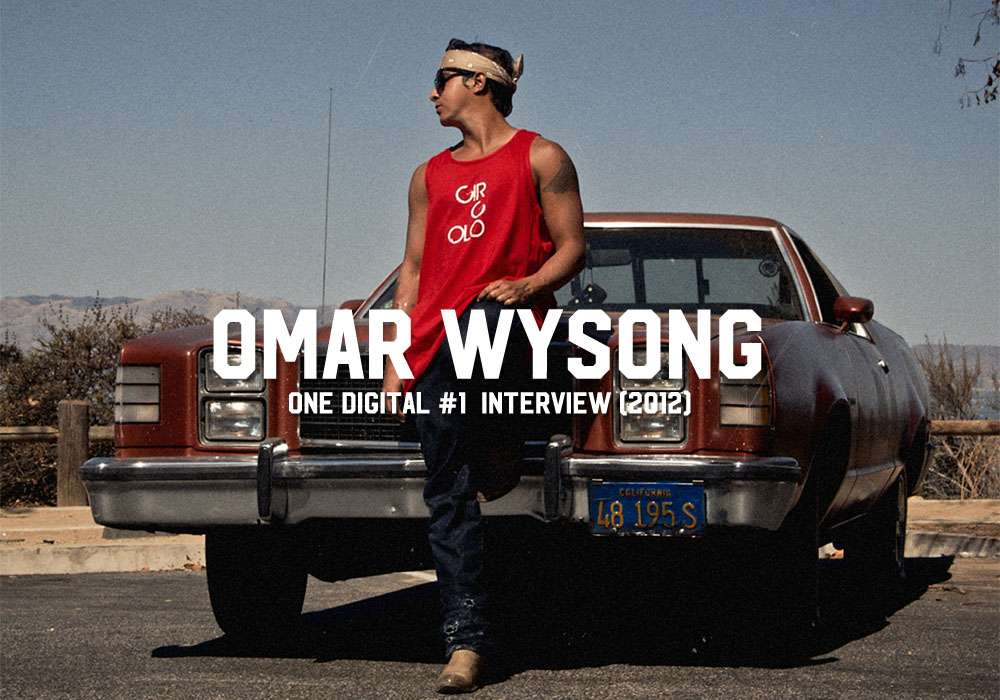 In 2012 Circolo Wheels was emerging as a new LA-based brand and part of their brand representation was the former Mindgame pro, Omar Wysong. Long out of the public eye, Omar’s reappearance on the scene sparked interest and curiosity not only about the new brand he was associated with, but also about where he’d been and what he’d been doing since redefining style and technical prowess during his tenure on the Mindgame roster. Also in 2012 ONE launched our short-lived Digi mag that was hosted solely on Issuu.com, and for the inaugural issue Chris Couture interviewed the blade legend while Jeff Linett supplied photos. And in the spirit of his epic photos floating around the internet, here’s another look at this interview with Omar Wysong.

Where are you from?
Guadalajara, Mexico.

Where do you currently reside?
Calabasas, California.

Who was your rst sponsor?
Ohio Surf and Skate.

I remember a lot of your early sections were in Razors, why did you decide to leave them?
Yeah, that’s right. They were really cool to me, and I am thankful for all they did for me and OSS (Ohio Surf and Skate), but I think at the time, sadly, we were going in different directions.

What was it like skating for Mindgame? How did that come about; what was your reason for leaving?
I got a call from Shane Coburn one day back in ’98, and he asked me if I wanted to ride for Senate or Medium. I chose Medium so I could keep my clothing sponsor, which was Chris Garret at Fiction. If I would’ve gone with Senate I would’ve had to drop Fiction. Lucky I chose Medium, because about a year later Shane decided to leave and start Mingame with some of the Medium cast: Dustin Latimer, Brian Shima and myself. So Mindgame began in 2000, which was probably my greatest time in skating. I got to come out to Cali and meet everybody, travel around—it was a great time in the sport. Unfortunately, nothing lasts forever and the sponsorship and relationship faded. It was strictly business. 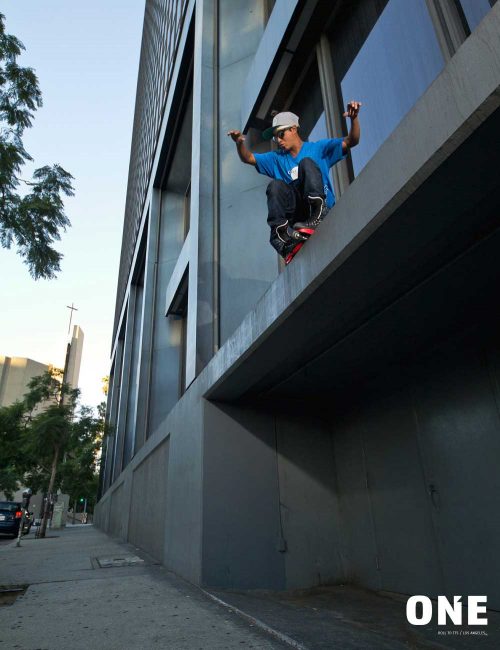 This is your second wheel company, correct? What happened with the rst one? Where do you plan on going with the new business venture?
This is actually my fourth involvement in the wheel business, lol. Third time didn’t go too well. It goes Mindgame, which was a good experience; Chimera, with Benny Harmanus (I loved those wheels by the way). The third time was Exile, and we’ll leave that one alone. And now Circolo. We just wanna have a good wheel, cool graphics and concept, and represent some new and slightly older talent. We hope skaters like it and hopefully keep Circolo involved in the skate market.

You also skated for the clothing company Monx. What was that experience like?
In a lot of ways Monx was like a family—we skated together, traveled together, roomed together, partied together, and thought out the whole “Monx” philosophy together. It was really great; we not only reached out to the immediate team, but to veryone we knew that we considered a monk. Someone who was down with it. Monx was all about being individual, living out and being a student of your own calling, and it didn’t matter what you were—blader, B boy, artist, graf ti artist, dancer, break dancer, boarder, biker, surfer, rapper, whatever. We were all in this together-type mentality, and as far as we were concerned they were all monx.

Any chance of your new line of shirts expanding as that company did, as far as the depth of the line, sweatpants, video, etc…
I hope, yeah de nitely. We are a lot smaller than Monx. I thought up ramosong maybe ten years ago and wanted to adopt what Monx was all about. We are a small, skater-owned business, so we will be coming out with hats, hoodies, pants… but we’ll be going little by little. We’re working on a team, we got Walter Sanchez reppin’ in Mexico, Paul “Angus” Austin, and hopefully many more. And yes, a video for 2013. 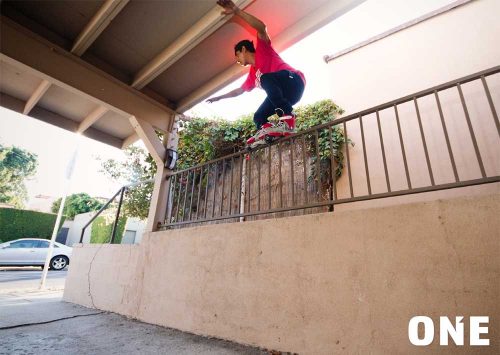 Who were some of your favorite people to skate with, then and now?
OSS crew, All the MONX, LSTAR, LA crew and ol’ Norcal crews and everybody reppin’ Los Angeles.

Do you have any favorites in the game that are still killing it?
Yes, of course, but too many to name.

Do you have any favorites coming up in it you like to watch?
I am really liking what our team guys have been up to—Yuri, Zamora, Day, Angus, Sanchez, Angus.

Your style has changed up over the years, progressed into different forms or avenues of doing deals on the blades. Your Mindgame section was classic stylish, progressive skating, then came the introduction of more negatives, and eventually the mushroom blading style of more hand ips. I’ve noticed you also bringing more classic tricks back as well. Where do you see your skating going in the future?
Lol, thanks for the gracious breakdown of my skating. I don’t know, I kinda just go with it; what happens, happens. I like to change it up from just rails and ledges, but if I put too much thought into it, nothing happens. So I just take it day by day, spot by spot.

What do you do for a day job these days?
I work in the entertainment business and have a small non-skate business.

I’ve seen you riding classic Thrones for the past half a decade; are you currently riding for USD, or are you just getting the hook up?
I’m getting the hook up. Matthias and the Conference crew have always been really good to me.

Also noticed a lot of interesting color ways with the blades. What gives u the inspiration to switch it up?
I guess I get bored sometimes, and if I’ve got a bundle of skate parts laying around I just throw things together while I’m watching a game or hanging out.

What emphasis would you put on current style compared to styles of the past?
I think people are just real stylish these days, really creative. I think there’s more room nowadays for creativity and variety; you’ve got all kinds of really talented and interesting skaters out there. It’s really inspiring to see. The ladies too are especially killing it these days!

Do you think our current trends are headed in the right direction?
I thinks so, and sometimes you just gotta let it be. There’s no regulating skaters—they’re gonna do what they’re gonna do. There are also a lot more skater-owned brands, I think that’s a good sign. Skaters taking control of their own sport.

What advice can you give to kids out there trying to come up in the game? How important is carving out your own style?
Just keep doing your thing, keep skating hard, know your limits but test them, stay healthy, skate, skate, and skate some more. I think style comes about naturally through experience and con dence. I wouldn’t stress it. As long as you do your thing, style will follow.

I’ve noticed the obvious increase in your time invested in blading again. Is this a full blast comeback to the blade scene?
We’ll see. I’m pretty busy these days, but I can’t stay away from skating too long.

Saw you hanging around the Blading Cup, but not blading. Why did you decide not to compete?
Just wanted to stop by and check it out, say “hi” to some people and show some support ,and have a good time. As far as competing, I’m just not very competitive right now. Ha ha. 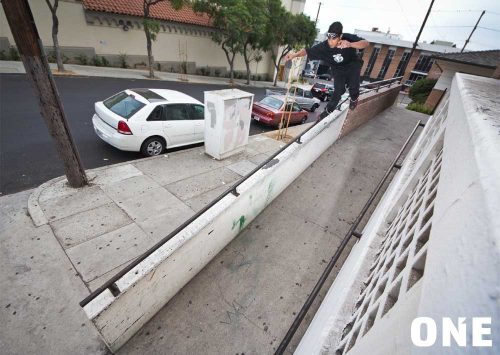 Is there anything about your new wheels you would like to talk about; manufacturer, compound, cores, sizes etc…?
Normally I’d defer this to Jeff Linett, but I can say that I’ve been testing several new formulas and compounds; this project is looking very promising. I went with a strong, hard wheel in blood red. A solid formula for riding freestyle. Of course we can do any possible color, so who knows what is next.

Any new team announcements coming up?
As for now, no, but that could all change instantly. We will allow Circolo to de ne itself over time. I trust it will roll in its own direction.

Good call on Russell Day
A lot of people have been saying that. I’m grateful he’s joined the team. Russell is a solid guy who has been around for a while. Louie is the man and still braking new grounds and it’s impossible not to respect Yuri.

What Inspires you?
My family, life, and knowing we can make change for the better.

Any shout outs?
Shout out to all who have supported me throughout the years and everybody supporting us here at Ramosong, Circolo, TheJLC, the entire skate scene and to ONE for all the exposure and support. Thank you, peace.

Thank you a lot for sharing this with all people.

This was a great interview!