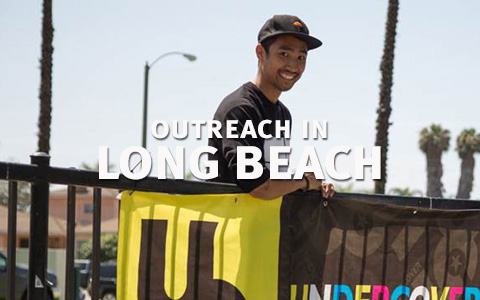 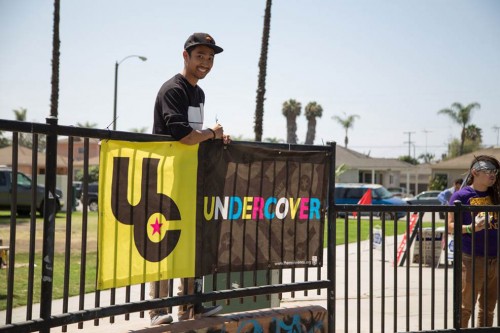 On June 1, Michael Obedoza and some other bladers took part in an event called The Bully Free Zone, an anti-bullying awareness event organized in the Long Beach community. He and skaters like Jeremy Soderburg, Kruise Sapstein, Tim Franken, Nick Rother, Chris Calkins and more bladed for the cause and showed other attendees what’s possible on blades. To find out more about how he got linked up with this opportunity for community outreach, we asked Mike some questions. Here’s what we found out…

Why don’t you tell us what the event is, what goes on, and how you became involved.
The event was the Bully Free Zone 4 hosted by Autism in Long Beach (AILB). AILB holds the event at Houghton Skatepark, which is the same park that has a blader night every Monday. The Bully Free Zone event is held to increase awareness of how being bullied is tough as a kid, especially with autism. There even is a person with autism that goes on stage and talks about how successful they are, amongst all of the bullying they received as an autistic kid. 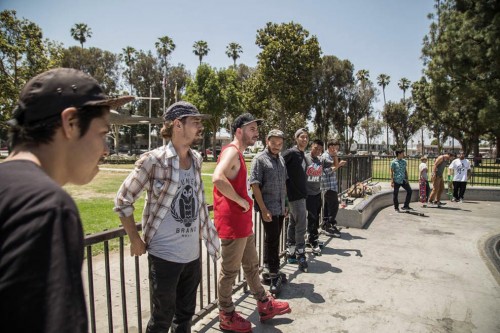 The local businesses from Long Beach come support and set up booths with activities for kids, including our friends at the Long Beach Roller Sports shop. Long Beach Roller Sports is the only skate shop in Long Beach that I am aware of that sells aggressive inline skates. They helped sponsor the event by giving a free set of wheels to 2nd place. The family that runs Long Beach Roller Sports introduced me to Autism In Long Beach which wanted to see blading at their event. I was lucky enough to raise $100 for a Best Trick competition sponsored by Themgoods, Youth, Valo, USD, Xsjado, Kizer, and Undercover wheels. The event was fun, it had food trucks, a chalkboard van, those inflatable sumo wrestling suits, and an inflatable ball where you can throw a kid in the center and watch them roll around like a hamster. 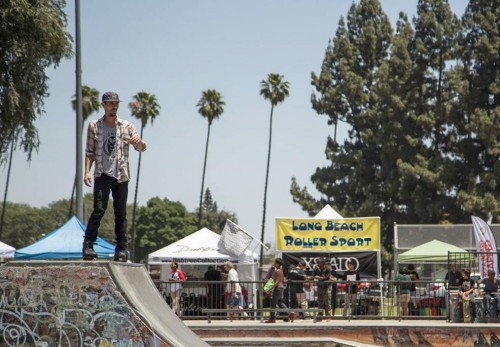 Have you been involved in charity events before?
Does community service count?

How did you like being apart of a demo?
I failed at linking up an M.C. to the event, so I reluctantly had to jump on the microphone. I was lucky enough to have an amazing line-up with some of my favorite bladers that competed in front of a crowd of 150-200 skateboarders, scooter kids, a ton of parents, and just kids that have never seen before blading. Since they had never seen it, it made being an announcer easier because they had no idea if I was messing up or not. 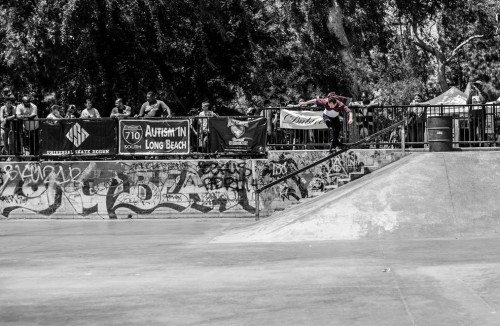 Anthony Gallegos introduced himself with a 450 royale on the down rail. I had to emphasize that he did a full rotation with a couple more degrees to do the trick. Calkins came in smooth and showed people how to grind UP rails as he was surfing fast royales on some revived Salomons.   Soderburg was launching fakie 720s with his ninja crazy kicks showing what else you can do on blades. Then there was Damon Franklin busting a few misty flips and some gnarly launches from the hip to the down-rail. Then on the other side of the park there was Nick Rother getting gnarly with a huge gap to disaster mistrial on a ledge. Tim Franken was all over the park with some solid lines and he even 360d over a box that people were just grinding, demonstrating some creativity. Then Kruise Sapstein rolled the box Tim has just jumped over and disaster topsouled some rail that makes my palms sweaty just thinking about. 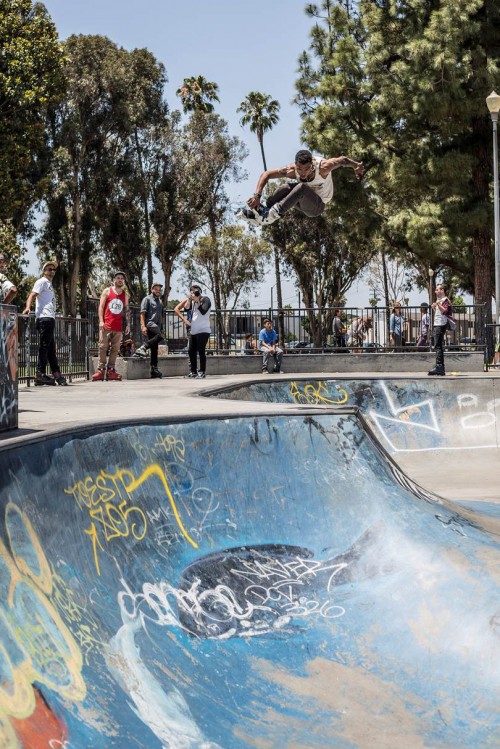 Joey Jamie, Joe, and Angel were getting technical utilizing all other parts of the park.

The crowd was filled with gasps of “Oohs”… “Aahs”… and “Oooh shit.”

It was all happening so fast.

I was so proud to be a blader.

I invited the crowd to the Blading Cup in Santa Ana if they wanted to see more. And I told people to check out the online content of the dudes and their skate sponsors on Vimeo and YouTube. I shared skate movies to look forward to, like F33t. And let them know that they can get a pair of blades at Long Beach Roller Sports.

When I handed the microphone back to the co-sponsor, a former council member of Long Beach responsible for the skate parks being built in the area, he told the crowd that he had “no idea what blading was” and admitted that “this was his first time seeing blading.” His reaction let everyone know he was blown away, giving it a “cool” rating. The responses from all of the supporters at the event have been nothing but good, and Autism in Long Beach wants to give blading more time next year.

Did anyone ask you about rollerblading after the demo? Any new prospects?
There were a lot of people that came to the booth and were in shock. The people outside our circle of bladers/prospects were able to identify rollerblades, and have seen us at the skateparks prior, but had not thought too much about it up until that day. Although, when I had asked kids to try a pair of powerblades, they were skeptical about it. Maybe too shy? Too new to them? I don’t know. 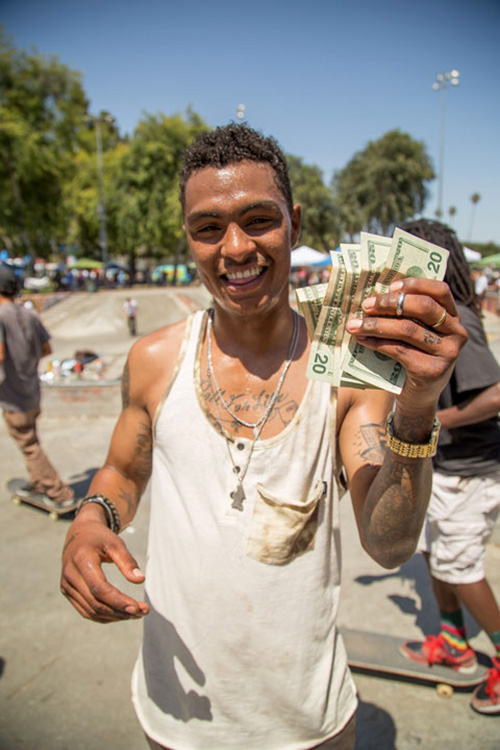 Do you think even though there isn’t a whole lot of money in our industry, that we should still try to take part in charity events or hold our own?
People can do whatever they want to do with their time and money.

Having an event, charity or not, is up to whoever wants to put the work into it cause it is not easy. The hardest part really is just trying to get a bunch of people in one place at the same time when everyone is busy.  But when there is a will, there is a way. I mean as a Bblader, if we can fall and get back up until we can get the trick, how can anything in the world be impossible with a firm understanding of persistence? 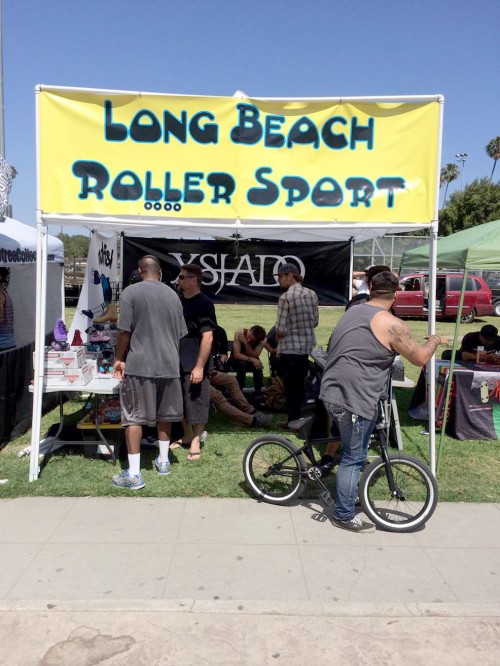 However, I would like to see more blade events. Invite some friends, make fun of each other face-to-face, BBQ, have a bonfire — burn something. Let’s celebrate our small underground family and let’s stop being shady with the gift of being a blader. One of the coolest things about being a blader (to me) is meeting people from the neighboring cities, states, countries, connecting with them afterwards, exchanging spots, seeing some new stuff, jamming out on music, getting wasted and sleeping on a friend’s couch in a place you have never been to. Meet their girls, go on road-trips, have new experiences, live free as a blader and have some fun. We only live once, and what better way to live than to live as a blader? Especially when our family is so tight knit right now, wherever in the world we go.

Interview by The Dook
Photos by Brandon Loureiro and Joshua Goodell

Neat article, thanks for the community support, both blading and the autism!

Cool! Please add captions under pictures, it gives a little more insight in to the photo.

This is dope, big ups to Mike and the other bladers that took part in this, too bad I didnt know about this in advance