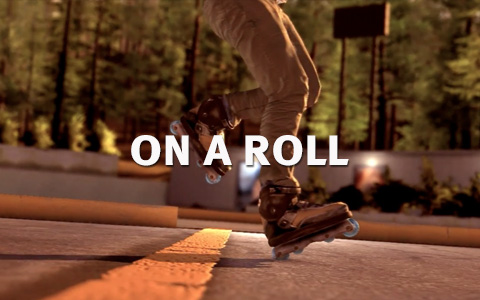 Q&A with On A Roll

It’s no secret that an outfit calling itself On A Roll Studios has been slowly building anticipation for a new console blading game. They’ve released screen caps showing game action, the process of generating motion captures, and now a full action trailer showing super-smooth blading with dynamic lighting associated with high-profile video game releases. In a word, it looks promising. A couple months ago we kicked some questions over to the game team to find out more, and now that the trailer is out they were willing to talk. Here’s what we learned about the forthcoming release of On A Roll.

Hey On A Roll people, thanks for taking some time to speak with us. From the few screenshots that have been shown online, it looks like you guys have a cool gaming experience in store for bladers. But before diving into that discussion, I think we’d be remiss if we didn’t start with more information about the people making this game happen. Who is the On A Roll team and what “experienced skaters” have been consulting on the project?
Our team comes from various backgrounds in the entertainment industry, ranging from 3D animated feature films to television. Every team member has over 10 years of experience in these fields. On top of that most of us have been skating for 15+ years, so we know what we want out of a blading game.

As for the experienced skaters, we have a great little community of skaters here, a lot of them are in their ’30s or approaching 30 and they have been doing this for a while. We’ve used the most stylish skater as our reference for the mobcap. 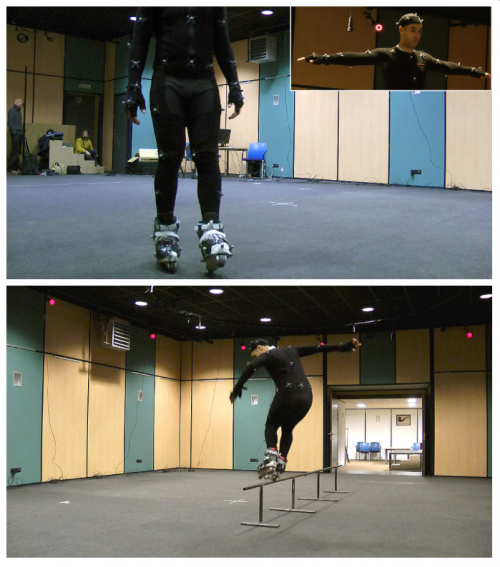 There’s a screenshot on your Facebook page and website that shows a skater doing a freestyle backside backslide down a big curved rail. People like this image quite a bit, but there’s a statement from you guys saying that it doesn’t “represent the final quality.” Where should future users set their expectations as to what they are going to see and experience in the game? Is it gonna play like S.K.A.T.E. or Tony Hawk or…?
We’re definitely trying to push the graphics a bit further than what you got see in this screenshot. As for the gameplay, it will play like On A Roll, we’re hoping to bring you a unique experience which ideally will feel like watching your favourite skate video, only you’ll be controlling the skater.

I guess if we’d have to compare it to any existing game out there, the S.K.A.T.E. series would come closest, but we’re pretty much doing our own thing.

I’m sure you guys have played Blading the Game, Rolling, Aggressive Inline Skating, Jet Grind Radio and probably other blade-related video games I don’t even know about. What have you learned from the success/failures of these prior endeavors?
We’re all big fans of those games. Rolling, in particular, came closest to a realistic rollerblading game, but it still had a long way to go in terms of animation, controls and graphics. Of course gaming technology has advanced so much since Rolling came out about 11 years ago. So it really wouldn’t be fair to make any comparisons. I guess the main difference between us and the guys from Rage Software — the developers of Rolling — would be that we have been rollerblading for a long time and we started developing this game because we actually wanted to play it ourselves, whereas the Rage team started rollerblading as part of their research for the game, at least that’s what I gathered from one of their early interviews. 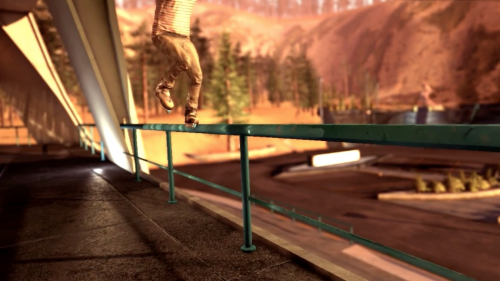 Besides the motion capture sessions described on your website, what influences have inspired your approach to the settings and aesthetics of the game environment? Can you tell us how the level structure might work?
Our influences range from any mainstream skating video to the more refined pieces of art which have been surfacing lately such as KCMO and the Mushroomblading videos. Coming from an animation film background, we definitely have a strong appreciation for moody lighting, so that’s something that’ll hopefully show in the end result.

On A Roll will not have any levels in the strict sense of the word. The whole thing will be one big open world in which you can skate from spot to spot, have online sessions with your friend, play a game of B.L.A.D.E. or just cruise around and enjoy the scenery. We will try to integrate a lot of famous spots from all around world — or at least spots resembling those locations — into our game world. 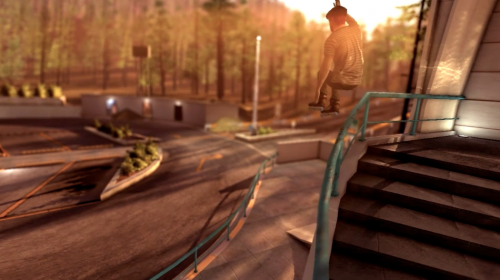 There’s a call on the On A Roll Facebook page for suggestions on which pro skaters to include in the game. How close are you guys to deciding the final game roster?
We’re currently speaking to various pros and brands, but we can’t confirm anything yet. More news about this will be announced soon though.

Well thanks for giving us some additional info. We know that there’s a lot of people out there that are excited to hear what’s next. Good luck!

Shut up and take my money!

FWIW this game should be available for the 360 if possible, I’m not ready to buy a xbox one yet.

I just want to create my own skater! Preferably one that doesn’t wear his sisters jeans

don’t forget to make everything grindable. skaters like to grind everything.

Waiting for the final product. For God’s sake guys make a PC version!

“the more refined pieces of art which have been surfacing lately such as KCMO and the Mushroomblading videos.” ???

KCMO was hardly watchable, and the Mushroombleding video’s are funny as fuck, but pieces of art?? Come on now. Get off the next man’s dick.
I’d think more in the way of ‘How Many’ by the contrast collective. Now that was impressive. I could give less than half a fuck about the next idiot filming only with played out old camera’s and pointing their fisheye at the ground after a landed trick.

Hope this doesn’t disappoint, they’ve got some work put in already.

one blade mag i am sorry for remy’s behavior. I molested him as a child and now he hates the world. He has trouble accepting others and anything different than he is, which is a overprivlaged white piece of shit. I assure you his comments are poorly thought out and offer nothing worth reading. Again i apologize for his behavior. I should probably just kill the little piece of shit.

think it’s really sick that another rolling game is going to come out and this one’s legit. we needed this game years back. good it’s becoming a reality .

I’m looking forward to this. Skate made me almost buy a 360. This will definitely make me get one. I wish there was more information from the developers about who’s involved in sponsoring this game. I’m sure most skate companies would like to be involved. It looks like the conference is involved because the prototype is skating USD carbons and kizer type frames. But what about pros who are involved? It’d be great to get names and promos involving companies and pros in the industry. And a legit website for the game. Or at least more activity on their blog.
Nice work so far. Let’s get some more promos out and give us more info. Like can you answer what the controls are like? If they’re new can they be explained? create a blader? Yes or no? Game companies involved?

And the most important question…. Release date, or time frame … One year? Two? 6 months…. Just some sort of background would be great. One done good getting an interview but they’re answers seemed vague.

Hope this game will works with old Gen console !

dont make the skaters’ hands super small like in “rolling” it looks super wierd :s we’re manlier than that! lol

Hope this gets released, and is back to basics like the old tony hawks. Fed up of slow motion tricks and weird button combos. lets have button bashing epic tricks 🙂

well KCMO was good, but certainly NOT the best blading video out there, but this is just my point of view. Anyway, I’m really looking for the release of this game, I’ve been skating since the mid 90’s (Lightnings and huge pants) and been part of the whole “evolution” of the sport if that’s hoow you wanna call it, and I gotta say it is about time to have a serious blading game, just don’t forget in matters of what the characters will or could wear that not everyone like tight jeans or listen to indy rock, some of us still like some good ol’ hip hop or even dubstep or something else, what I’m trying to say is try to think big and open minded about different styles. THANKS GUYS FOR THIS HUGE PROJECT, HOPE EVERYTHING WORKS OUT GREAT AT THE END!

yo this is increddible i was always pissed on how aggressive inliners are always the shadows in the skateparks, and how they make so many skateboarding games and bmx games like give us a chance so if this comes out perfect and looking great i will be so greatful, though i did not see anywhere, where the release date was and would like to know when it will, i saw it said 2015 winterclash on it so i hope it wont come out at the end of next year, if so i will just wait oto get it, i have been a huge blader since i was little and have always wanted to lay a game like this, so when and if i get the hardcopy in my hand i will be so happy so good job guys and keep up the work cant wait!!

I will buy this game and a copy for all my friends on the PS4.

Next-Gen & PC only please, we don’t need the old consoles holding a glorious game like this back from it’s true potential!

Keep up the great work On a Roll Studio!!!

Hi Guys.
First off thank you for doing this!!! Wow i can hardly believe its gonna happen 🙂 is there a rough idea on a release date for ps4 yet?
Keep up the great work!
Peace.

Aggressive inline seems so long ago ! 🙁 p.s. Franky better be in this one too.

Anyone know the official release date? Cause id love to know so i can start saving