Look around your city or blade scene and you may have noticed something — more diversity in the setups and wheel sizes people are rolling.

And it’s no accident.

Though once obsessed with distancing itself from recreational or any non-“aggressive skating,” today’s blader is more willing than ever to appreciate and embrace rolling of varying disciplines or styles. And for anyone concerned with growing the sport and attracting new and younger bladers, this is encouraging progress.

One group that understands this approach and is pushing the concept in its branding efforts is Rollerblade®, and in 2015 they have added some nontraditional blade athletes to their pro roster. Among the new representatives are professional female athletes skier Sierra Quitquit and CrossFit instructor Kacie Cleveland.

As you may imagine, the core blading community didn’t quite understand the decision.

Seeing an opportunity for discussion, Cody Sanders spoke with Tom Hyser to find out more about why aggressive skating has such a chip on its shoulder, what plans ROLLERBLADE® has for sponsoring people outside of blading, and much more!

So it seems you’ve caused quite a bit of hubbub recently with your decision to sponsor a few people that aren’t purely “bladers.” Care to explain what’s going on to those of us who haven’t heard?
I like to cause hubbub, lol! Anyway, we sponsored two ladies: Kacie Cleveland and Sierra Quitiquit. Kacie is a crossfit instructor and owns a crossfit gym. I would consider her more of a pure blader than anyone I know. She holds the record for skating across the USA faster than anyone ever has. I couldn’t think of a better female example to represent fitness style skating. She has an amazing positive attitude and is down to try any type of skating. She skates almost daily! 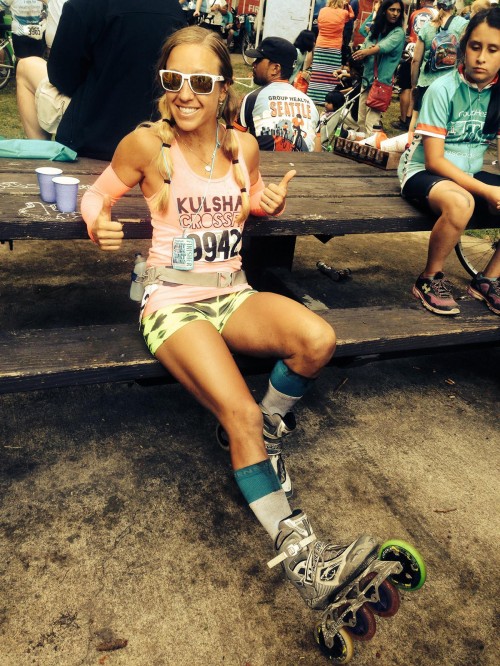 Sierra Quitiquit is a pro big mountain skier, model, surfer and yogi. She also has a very positive attitude and loves to blade. She realized a year ago how amazing blading was for her skiing. It’s a way for her to workout without feeling like she is working out. Blading is the very best thing you can do in the off season for skiing. Sierra has a massive fan base and social media following. She skates every chance she gets! No, she is not sponsored for doing kink rails or whatever… 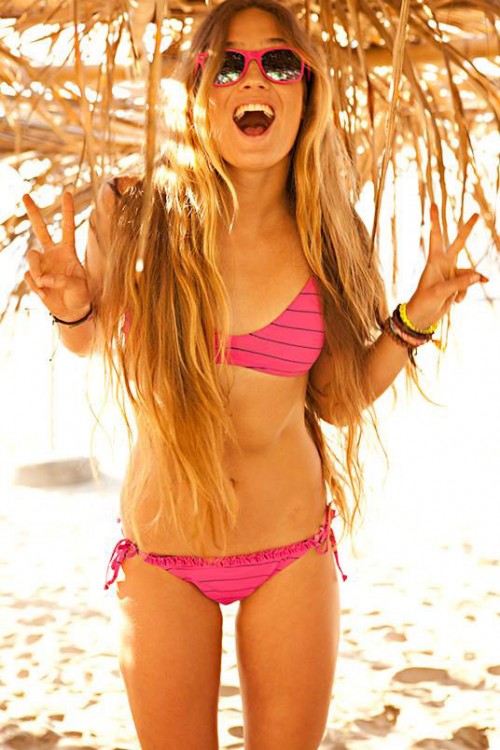 We sponsor these athletes for many reasons but the main reason is to show the sport to people who don’t already do it. It’s pretty basic. I think the sport has fallen victim to marketing to the same core people over and over. Hence no growth for the street category…. We seem to discuss the same ideas year after year. Within our ranks there are a bunch of passionate individuals, but we’re not thinking outside the box.

Are these skaters “Pro” for RB?
These are professional athletes, so if people need a label on it, yes — they are also pro for RB.

The definition of a professional:

Engaged in a specified activity as one’s main paid occupation rather than as a pastime: a professional boxer. • having or showing the skill appropriate to a professional person.

We wouldn’t enter them into the Blading Cup or whatever, but they’re professional on a whole different level in their field of expertise.

How do you think this going to affect aggressive skating sales?
In order for aggressive skating to grow again, the whole sport needs to be respected.  An aggressive skater likes to think they’re a part of some different sport than a fitness skater, or racer. I can tell you when I’m on an airplane and talking to the average Joe, he doesn’t understand that there are all these different niche categories of inline skating. People think of it as one sport. In the ‘90s, aggressive skaters where selling skates but it was the massive sales of recreational skates that was driving the business. Aggressive skaters went out of their way to distance themselves from this type of skating. I remember clowning fitness skaters myself. Now that I work at Rollerblade®, I understand the realities and negative impact this small-minded thinking has on the whole deal. Look at cycling, it’s the same story. 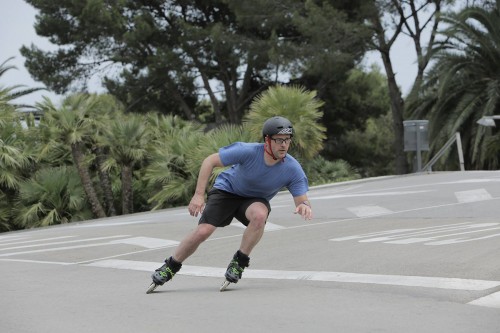 My right knee has been rebuilt twice. I can no longer jump down stairs and handle impacts of grinding rails. The day I realized that rolling was fun on big wheels, I was very happy. I was able to get that feeling of rolling. Hauling ass down hills or cruising the streets is amazing.

How many new participants do you think this venture will bring?
It should bring at least five more skaters into it….  jk. I don’t know exactly, however we have seen more people skating than we have in the past 10 years.

Whenever you spoke to these skiers about rollerblading, were they interested at all in our culture? Do you think they’d incorporate our style of skating into their skiing? Or vice versa?
Sierra hit me up directly. She said “I want to be part of the revolution that RB has started.” She has noticed our marketing efforts the past three years. Rollerblade® has changed up our images photo/video wise. I have hired actual skate photographers/videographers to make our media. We no longer have people skating around in full pads holding hands for every other photo. As the marketing guy here, I had enough of that. I got pretty bummed out when I would travel and meet people, they would say “people still blade” or “Did you tell your parents that you blade?”  All those dumb jokes….. Yes, I know that skiers that blade apply what they do on skis and vice versa. Nick Goepper, who just won X Games slope-style, blades in the spring and summer. The dude has a p-rail in his garage.

Aside from skiing, are there any athletes/people that Rollerblade® sponsors that our aggressive community may not be familiar with?
I didn’t mention Jorge Botero. He is a world champion marathon skater. An absolute beast. He can skate at 30mph under his own power. We just added Kyle Sola to the team as well. He is from NYC and kills it street skating, urban style, and also likes to skate 110mm skates. The guy just loves to skate. That’s what the brand is all about. 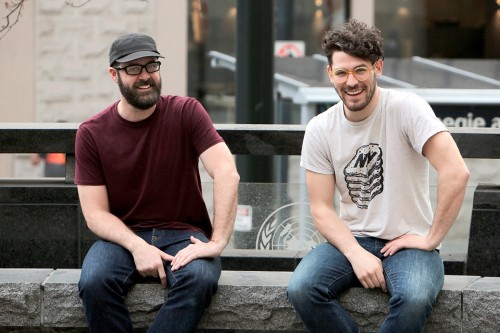 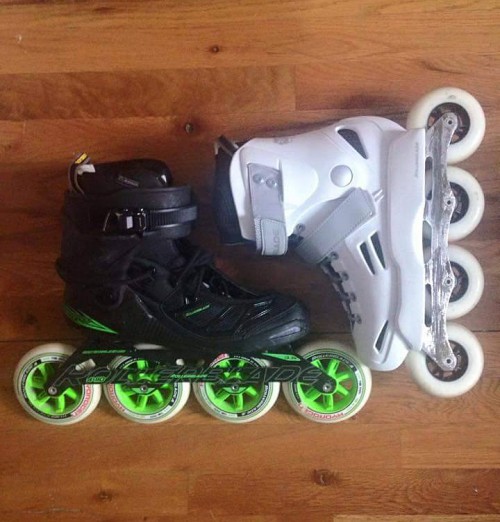 So you’re sponsoring athletes outside of our core inner circle, sponsoring people that do other types of skating, and you’re bringing up young bloods into the pro ranks. (Lapierre, Keane, Coco). Why do you think some aggressive rollerbladers are so hostile to other types of skating?
I’m not 100% sure why aggressive skaters are hostile to other types of skating. It has a lot to do with what they have been taught to think from the media they are ingesting. I feel it’s some indirect influence from the skateboarder/surfing mentality. All that started way back in surfing. The old “don’t poach my waves vibe.” Surf locals don’t want outsiders on their turf. Skateboarding was a direct decedent from surfing. That mentality just carries on in other action sports unfortunately. Snowboarders diss skiing, etc… The fact that bladers also do this is just lame. The participants of these sports are young people, it just goes along with limited life experience. When you are in middle school, you just want to be accepted no matter what. You know what I mean?

Coco is a perfect example of what is up! This lady can shred at the skatepark or put on her speed skates and skate a marathon. Again, she loves it. The coolest people on the planet don’t do “normal.” Think about your favorite artist and that’s easy to understand. That’s how things change. 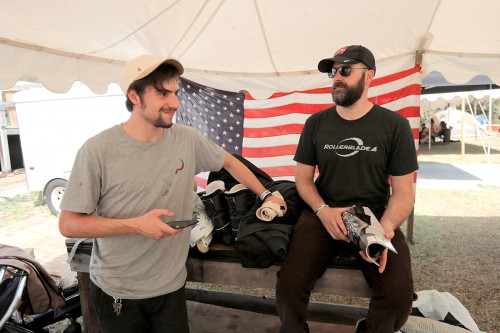 Do we need to have all of the different kinds of rollerblading like each other? Is it necessary?
Right now it is necessary. Aggressive skating is the smallest it’s ever been, it can’t sustain itself without growth. There is a reason why you see your favorite core online shops selling big wheel urban/recreational skates and other items. There shouldn’t be such a division between these types of skating. When I was out with a torn ACL injury two different times, I used recreational skates to get my legs and body ready to aggressive skate again. Is that not okay? I mean come on…. it’s way better for your aggressive skating than riding a fixed-gear bike around!

Most aggressive skaters would rather be seen on their fixed-gear bike than a pair of 100mm race skates. Why? It goes back to that middle school way of thinking.

How do you suppose we broaden the narrow scope some skaters have on “rec blading”?
We should stop following the herd and do our own thing. Every single aggressive skater I’ve sent a pair of Twister 80 skates to try out has loved them and didn’t even realize how rad it was to be able to turn and skate fast. Simple as that. It’s okay to have a few different pairs of skates! A person that loves to snowboard likely has a few different boards depending on the conditions or the terrain they plan to ride. Skating should be no different 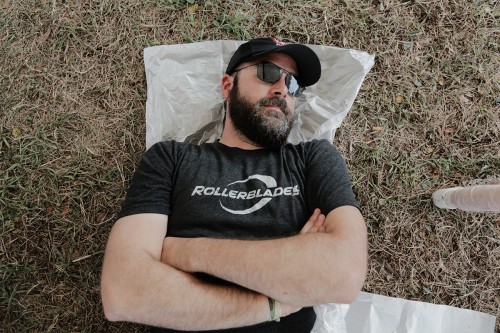 Blading is completely different from every other action sport on the planet. With all of its different side events, The Panhandle Pow Wow has done a good job of redefining what a blade event should be like. What other things do you think should be incorporated into a new style of event that could cater to ALL of blading?
The Pow-Wow is spot on, my friends! This is why RB is one of the title sponsors of this event. A big wheel category for these types of event would be cool. Mushroom blading is really cool. I feel that the sport/lifestyle benefits from good video edits more than anything else. The best part about blading is that it doesn’t have a set way to do it. I quit wrestling when I was 15 and started to blade because I could invent the way I do it. Total freedom. That’s what it’s about. People like Greg Mirzoyan and the Mushroom Blading guys have given you the hall-pass to look at the sport differently. Go reinvent your reality! No one is stopping you but yourself!

Find out more about Rollerblade HERE.