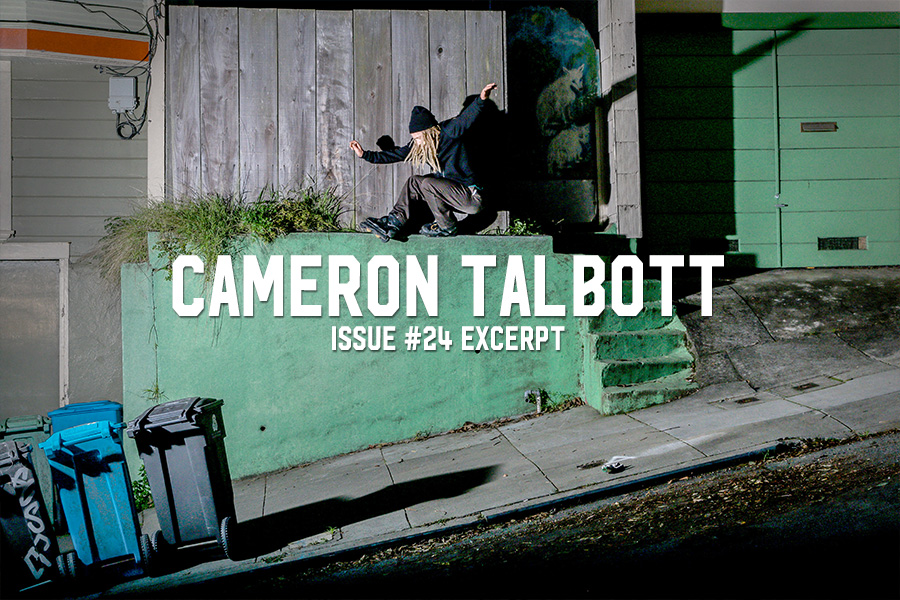 Written by ONE Staff - Published on Friday, January 4th, 2019

Issue #24 is in stores everywhere, and Cameron Talbott graces each of those magazine’s covers. He also delivers an in-depth interview with photos by Erick Garcia, where he discusses life bouncing between the Northern California Bay Area and rugged hills of Missoula, Montana, where he spent much of his later life, and how those pieces fit together to make him the blader he is. So check out this short excerpt from our interview then see the rest when you grab a copy of Issue #24.

When and how did you become an adopted part of the NorCal scene?
Haha! Ever since I started skating I was bouncing back and forth between the Bay Area and Montana. That meant I grew up skating with a lot of the guys around here in a way. All these years later, many of us still skate, and continue to create and contribute to skating in our own way as the years pass.

How long have you been living in San Francisco, like, permanent resident status? And also tell us more about that house with the crazy ramp in the backyard.
I’ve been here in SF a little less then three years now. And yeah, the bowl was rad. I got super lucky moving into a new place that happened to have a backyard bowl. Just a few months back it was taken out, but the year I got to enjoy it was great! RIP backyard bowl.

Soul to Roll to Gap Over Rail

Have other personal factors influenced your skating or travels beyond what anyone might know about? I guess I’m asking, how does real life impact blade life?
Real life and the daily grind that comes with it definitely has a huge impact on skating as I grow older. Working a full time job takes away from time that could be spent skating, but at the same time creates a healthy balance so that I’m not oversaturated with skating, haha. Too much of one thing can become not such a good thing sometimes.

How has blade life impacted your real life? Is there a difference?
Skating is just a part of my life and it fits itself here and there and provides a great time.

So 2019 is almost here — what direction are you riding the wave? What’s on your horizon for projects or travel or just regular life stuff?
Just taking things day by day and trying to have fun with skating. There are lots of dudes around here killing it, and it’s fun to be around. Been working with Taylor Kobryn on his project over the winter and now through the summer. He’s putting together a flick with the likes of Vossoughi, Phil Moore, Danny Malm, Joey Lunger and myself. Lots of other rad dudes involved as well, so it should be a good one! Also a few trips Keane and I have been talking about doing with RB, so we’ll see how the year unfolds. Other than that, just trying to enjoy time with friends and family when I can!