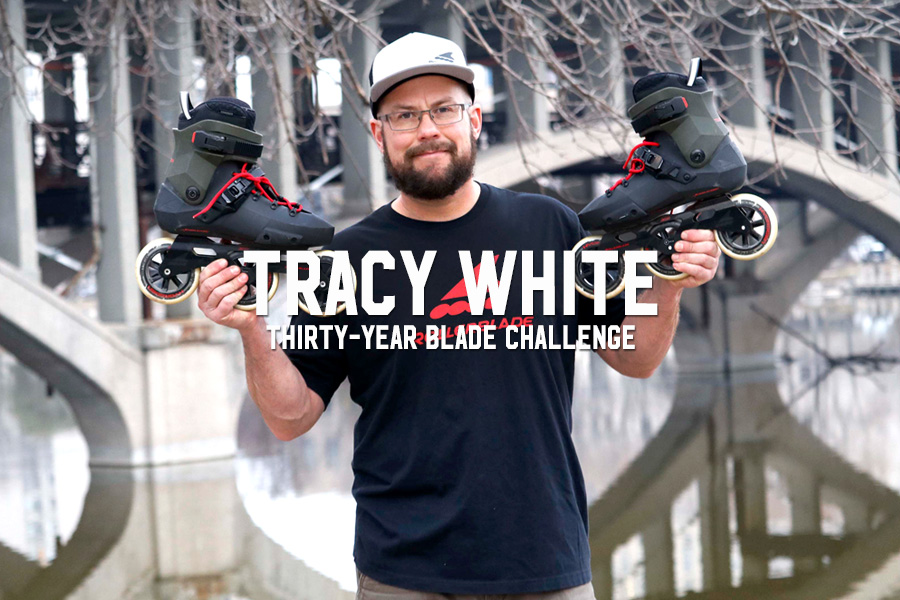 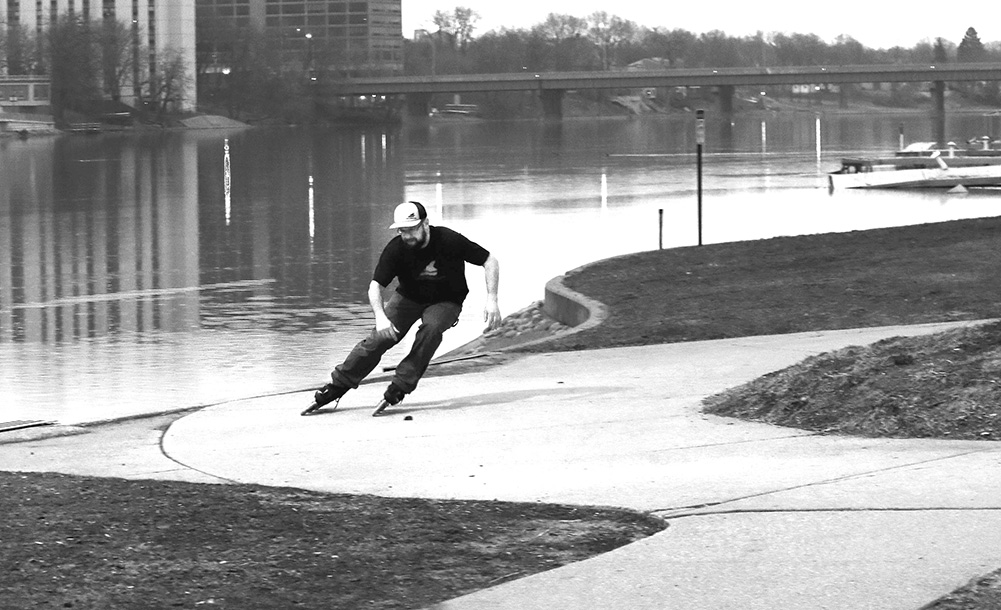 You’ve probably heard his name, you might already know of L.A. All Day, and you may have witnessed him on the mic at Bitter Cold Showdown. You may even be one of the lucky few to have visited the Tracy White Blade Museum or, most recently, run into him at a speed skating or inline marathon event. Tracy White is one of inline’s greatest ambassadors. The man is NONSTOP! There have been a ton of interviews and spotlights on him throughout his career, so let’s see if we can get a new prospective on him, and his story.

Tracy came on the scene during the year Nineteen Hundred and Ninety Four; the birth of our sport. Representing Bauer skates and Hardline clothing, he was best known for his ability to fly through the course with lightning speed. A few years later, he started his own grind plate company called 4-Dub. Twenty years have passed since then, and he continues to represent the inline skate industry with passion, dedication, tradition, and the ability to consistently motivate others. I am grateful to have been a part of his journey these past two decades and will do my best to ask the right questions and get the most out of an abundant source of inline knowledge. — Carlos Kessell

What’s the meaning behind the the 30 year blade challenge?
Well, 30 years ago — on my birthday in 1988 — my parents got me my first pair of skates (Ultra Wheels 3 wheel/metal frames). It’s kind of a nod to the #30daybladechallenge, but I will be posting old video clips, pictures and magazine spreads from every year of my skating career for 30 days straight beginning Friday April 13th. Starting in 1988, each post will include a short story to really set the context. You can follow along using the hashtag #30yearbladechallenge.

The idea is to show skaters there are many aspects of skating to be a part of contribute to, and, most importantly, to never stop skating and to enjoy the RIDE! I hope other “old” skaters will do their own #30yearbladechallenge when their time comes too. So please check it out @tracy_j_white on Instagram and at Tracy White’s Blade Museum on Facebook.

When did you first discover that inline was more than just a summer hobby?
After attending Camp Rollerblade in Minnesota the summer of 1991, my dream was to be on Team Rollerblade. I had the chance to skate and learn from the Rollerblade team during the four-day camp and it was an amazing time! I’d never really thought about being a professional inline skater before that, and Team Rollerblade was pretty much the only show in town back in the early ‘90s. I started doing launch ramp and quarter pipe shows in the summer of 1992/1993 for a skate shop called Tre Bon Blades in Milwaukee, Wisconsin. The shows were during Summer Fest, which was huge beer and music festival. Then, in 1993, I got the call to do my first Team Rollerblade half pipe show in Virginia Beach, which ended up being my only Team Rollerblade show. But the very next year I received the invite to try out for the newly forming National Inline Skate Series, which I ended up qualifying for, and the rest, as they say, is history.

What was the first inline film you ever saw, and who first inspired you?
The Team The Skate The Ride by Rollerblade was the first video and I was hooked after that. Doug Boyce, AJ Jackson, Chris Edwards, Jimmy Trimble, John Tyson, and Jess Dyrenforth were the guys who inspired me back then. In 1992 I got to see the video premiere of Dare To Air during Camp Rollerblade in Santa Rosa at Camp Snoopy (Charles Schultz’s compound). That was my 2nd favorite video and very influential to me.

Can you shed some light on the significance of the 1994 NISS tour?
Sure thing. For those that don’t know, it was the first professional inline skating tour, back in the summer of 1994, and it was sponsored by Taco Bell and then aired on ESPN 2. It was a six-stop contest series at Will Rogers State Beach, Venice, Huntington, Santa Monica, Santa Monica Pier, and the finals in Venice Beach. The two groups that created N.I.S.S. parted ways after that year with one group being a part of the X-Games at ESPN in 1995, and the other group keeping N.I.S.S. together, which aired on Fox Sports. That was the Big Bang that really started the industry off. Televised skate contest created so many opportunities for everyone involved at the time — skaters, videographers, magazines, skate companies, etc. Anyone that has seen BRINK by Disney should know that it is inspired/based off of N.I.S.S., with a Disney twist on it o course! 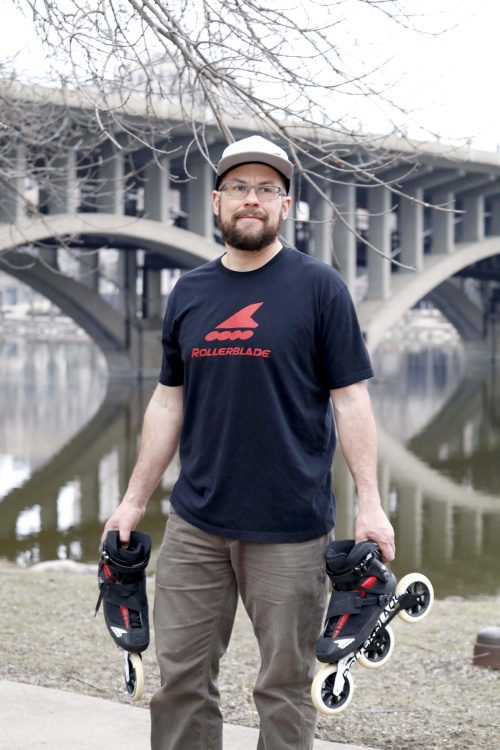 How did you get into speed skating? How is it different from the type of skating you did in your early years?
I did my first race in 1990, which was a 10k (6.2 miles) on lace-up, 4-wheel Rollerblade Lightnings.There were races popping up all over the place, so I would go to as many as I could. I was skating indoor skateparks at the time too, but there were no skatepark contest back then and I wanted to compete and be apart of anything that involved being on skates.

In 1991 my local skate shop (and first sponsor) The Ski Rack got me a pair of Riedell 5-wheel speed skates. I went to the Rollerblade Series in Chicago that year which was a part of a 20-stop 10k race series that had events all over the country. I qualified for the finals in my age division, so my mom ended up taking me out to Irvine, California for the finals where I ended up as the winner of the 1991 Rollerblade Series National Champion for my age division! So basically I’ve gone full circle from starting off speed skating and racing, to now getting back into those disciplines in 2014 when I skated my first marathon (26.2 miles). Now I’m once again trying to go to as many races as possible in 2018!

How did you get connected with Rollerblade®? When did they decide to bring you in as an ambassador?
I’ve been skating on RB skates since my long time friend, and brother from another mother, Tom Hyser started working for Rollerblade around 2005 or so. I was invited up to the Northshore Inline Marathon in 2015 with the Team, and President Stephen Charrier, to help set up and break down the RB booth. I was invited again in 2016 and 2017, then set up display booth/promotion tents for the Chicagoland Inline Marathon and Minnesota Half Marathon. I also got to drive the new Rollerblade demo van, which has been a dream of mine since I first set eyes on the original RB demo vans in the ‘90s! This year they brought me on Team Rollerblade for 2108 as an Ambassador, which is a huge honor for me. I definitely plan on making the most of it in my 30th year of inline skating! Here is a link to to my bio on the Rollerblade website: HERE. 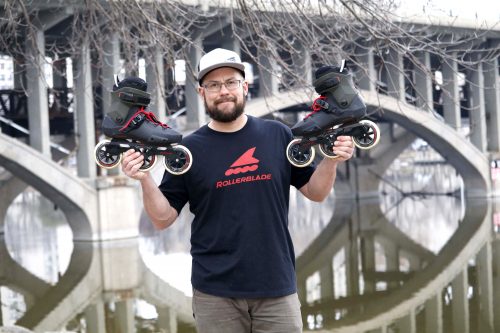 Tell us a little about your twin daughters and their obsession with inline skating?
I put them on skates at 1.5 years old, which was pretty early but they could walk pretty well. We skate in the driveway — aka the FIX.2 driveway park — where I have little ramps, cones, teeter totters to skate over, etc. I try to make it fun and as creative as possible. We skate around the block and go to the local schools where we play “monster,” a game where I chase them around from their made up bases. It’s great because the next thing you know, they have skated a few miles and by the magic of osmosis their skills have improved.

They have competed in my annual comp, the Forest City Blade Fest, and raced in the Chicagoland “Kid’s sprint” the last three years. They even have “house skates” which are size 4 TRS women’s Lightnings and Aeroblades for indoor use only. They seem to love skating which is all good for me. Summer even says that she will be better than Dad someday!

Way to go Tracy. This is awesome!!
I’m so glad we made History together and that my creation NISS will always be a part of your history and the history of this sport.
So many good times. Except when you knocked your teeth out
Death Box in SF.

I was at that same camp Rollerblade in MN in 1991! Such a blast! And i was friends with the folks at Tres Bon Blades as I’d lived in Milwaukee prior to the camp. Small world! Great memories. Inline skating is the best!