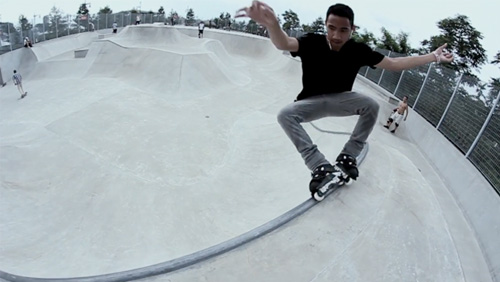 So, NYC; do you usually vacation in the city? What made you head over there this year?

I have stopped by NYC before on a road trip with a couple of friends from Chicago, and another time I went with a friend from Jersey that was road tripping to take her car home from California. I didn’t get to blade those two times, I just got drunk and did a bunch of tourist things on those trips. When I was there I was always aching to blade. I even walked through the Brooklyn banks wishing I had my blades and then they shut it down (talk about blue balls).

For my job in California I have to commute and sit in traffic, so for a vacation I wanted to go somewhere there was public transportation. I wanted to take a breather from Cali. NYC has an amazing culinary scene, and all the great spots I’ve seen in VGs and recent edits, not to mention I have some really good friends that I wanted to share space with. So, yeah, NYC was calling my name.

How would you describe the differences between the blade scenes in LBC vs NYC? Same idea, how are they similar?

The LBC, or LA in general, unites through the Monday night sessions at Northside bladepark, The Chosen-few First Sundays, or the Thursday night blade in Orange County at Mariners bladepark. In NYC there is a website, irollny.com, that unites the community over there. They have themed events and competitions. Anytime I needed to know what was going on, I knew where to go.

I went to a battle comp in Astoria park up in Queens where it was themed after playing a game of B.L.A.D.E. where you have to call out your closest friend or someone from a different borough. Then there was a rookie competition at McCarren bladepark in Brooklyn where kids who were only a few months into the blade game were able to win prizes. That was awesome to be there and watch the future being nurtured by the local OGs. There are a lot of new kids out there. So fresh that they didn’t have a clue who Dustin Latimer was. They’ll learn soon, I’m sure of it, but, wow. LBC and NYC are similar in that their community has groups within the blader group. Some people blade with each other and some don’t, but I guess as long as we’re all doing the same thing, it’s all love.

In NYC there are too many people, so when you want to blade street cops don’t really care ’cause they are busy having to tend to the thousands of other people. As for the street blading, you’re blading in front of a bunch of civilians no matter where you are. I had to suck it up and blade in front of beautiful women, deal with people sitting on the bench I was grinding ’cause there was no where else to sit, and/or wait for someone to move ’cause they were standing in the way. If you don’t like blading in public this is something you’re going to have to get over if you want to make the most out of your trip. Since there are so many people out there you have to stand your ground or else you’ll get walked on. Cali is laid back, everything is spread apart, so if you don’t like how something is going, there’s space to go away. But in NYC, every spot is a train, bike ride, rollerblade, or walk away. In the LBC you’ll see several cars or a tour van going places, so it’s a nice change to see bladers out in public.

Like everyone who reads your blog or read your ALT in issue #18, we know you love to cook and work in a restaurant. During two weeks away from work, did you ever have a panic attack about being away from the kitchen for so long?

It was a relief to be away from a professional kitchen. I knew it was temporary so I just enjoyed not being yelled at by a chef, or having to push myself to make food as fast as possible for a hungry and impatient customer. At work I think of blading and since I was on my vacation I just allowed myself to be a blader the whole time. I couldn’t stay away from the kitchen that long though. I’m a foodie, so I checked out the farmers market. I frequently visited Food Network Iron Chef Mario Batali’s Italian shopping market, Eataly. I stayed with my best friend from culinary school, so her and I made dinner a few nights. One night we did an apt-made pasta with a rustic tomato sauce. Another night we made Osso Bucco and tried to make bone marrow. The other reason I went to NYC was to check out food from Chef Eric Ripert, David Cheng, and, as a bonus, I got to eat at Jean George’s place. These Chefs are killing it for NYC. So in reality I can’t say I got too far away from the kitchen.

Share a cool NYC story with us. Something, anything, that happened during your stay that’s notable.

Running into Lonnie in NYC was the best thing to happen in my life. I hung out with him most of the time, and at some point he had to meet up with Ryan Jacklone. Ryan lived on the way to the Lower East Side where we were heading to have some refreshments (Brooklyn Lager) that night. Jacklone met us outside and we walked into his building through the mirrored halls leading us toward the elevator. The doorman recognized Ryan, gave us a nod, and then approached Ryan to give the hard palm slap followed by a fist bump. It was only natural for a person that most people would overlook (the doorman) to love Ryan since he’s such a character.

Inside his place surfboards lined the wall. He spoke in his New York accent but was very laid back. He informed us of how he had recently returned from a surfing trip in California. I can appreciate any blader that retires from shredding the streets to shredding waves.

He talked about his future business plans that I don’t know if I am at liberty to share. Lonnie and him caught up for a bit. Shy, I sat in the corner, listening, waiting for the right moment to talk. Making sure to include everyone in the room, he was first to ask me questions like the required, “Do you blade?” Lonnie gave me a proper introduction and Ryan asked if I had bladed anything around yet. It was my second day in the city and I was eager to shred, although I had not been around very much yet. So Ryan advised me to go to some spots, make the most of my trip, and then gave me permission to shred anything I wanted. It was awesome to meet someone who at a young age I thought was a badass, and to see that his personality matched his blading. He was one of the OGs and I was visiting his city. Out of respect, I made the most out of each spot and tried to showcase the best New York had to offer.

Where are there more bladers, Southern California or New York City? Curious to see what you think.

From what I saw, I’m going with Southern California has more bladers. But I was only there for two weeks and I didn’t get a chance to see everything, so I’m basing this off of the amount of people I see on a good Monday night blade in LBC compared to the amount of people that attended the B.L.A.D.E. battle at Astoria. Although I’ll tell you its really close. Everywhere I went there was always a set of bladers at the bladepark and another set hanging at the ledge that was down the street. I can’t say I saw one event where everyone was there. In comparison to other states, the NYC and “Soul Cal” scenes are very close in numbers.

All right, Mike, thanks for answering our questions. Now keep up the shredding.