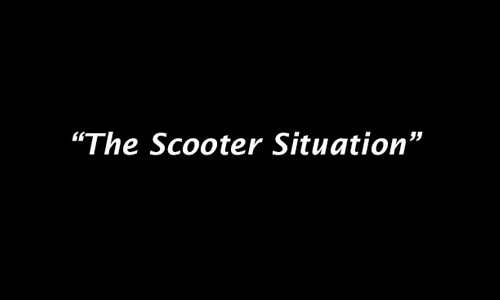 The Rounds is a space for ONE contributors to get together to discuss a specific topic, event or controversy related to the blade scene. Please feel free to add your voice to the conversation in the comments below.

John Adams: The recent dust-up regarding Shaun White and his comments about rollerblading has been as lively as it was expected. Rollerbladers took to Facebook and comment sections like a bunch of Beliebers after a Grammy snub to defend their true love. One aspect of the issue that has been overlooked, however, is the changing dynamic between the rollerblading and scooter scenes. Two things became very clear in the wake of White’s comments: First, bladers seem largely incapable or uninterested in defending, or even empathizing with, the scooter scene. Second, scootering has eclipsed rollerblading in the extreme sports pecking order.

Sam, you seem most qualified to comment on this subject. Is my assessment of the blade/scooter relationship correct? And do you think scooterer’s perceive the blade scene as a bully or as a target? 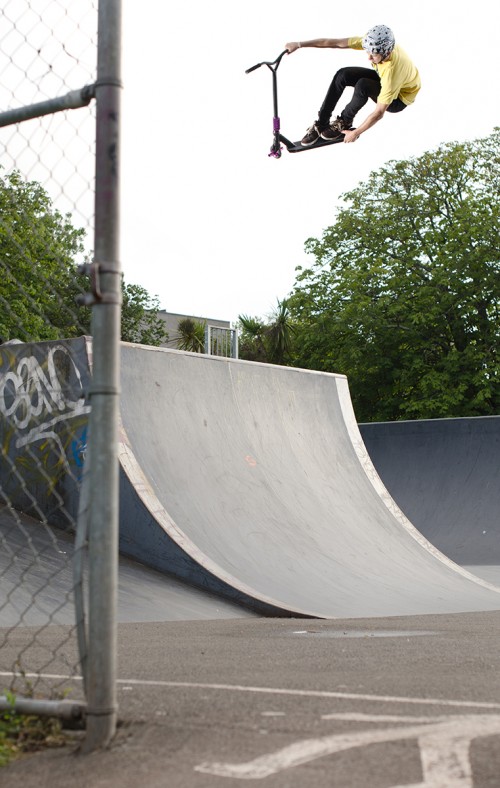 Sam Cooper: As a blader who works within the scooter industry, I’ve found myself in a unique position that has allowed me to witness a number of things around this issue of hatred amongst the different extreme sports. It is very much true that freestyle scootering has eclipsed rollerblading and most other extreme sports with its rapid increase in popularity. In many ways it’s going through the same boom that rollerblading saw in the mid-nineties — the parallels are plain for all to see. It’s for this reason that I would expect to see nothing but empathy from the rollerblading community for the growing sport rather than the torrent of hate that comes with being the new boy on the scene.  From what I can see, the blading scene is very much split in its reaction. Some see the benefits of a boom sport and others simply accept another human expressing themselves in a way they choose. Those that don’t think in this way seem to be a mixture of younger guys that don’t know the history of blading and elders who simply are falling into a played out pattern of negativity that reminds me of the behavior of the individuals that put me down for my choice to be a rollerblader when I was younger.  Despite the hate coming thick and fast and from all angles, the freestyle scootering scene is made up of open-minded and tolerant young people. Oddly, they accept, love and even champion the work and achievements of people within the scenes that tell them what they do is “gay.” As rollerbladers who have been through years of verbal abuse and hate, how can we as a community let our own kind become the devils that blight a generation of young people who simply have a passion no more different from our own?

Jeff Stanger: I agree that the current attitude of many bladers towards scooter folk range from accepting all the way to downright hateful. Danny Way hateful. One would think after being disrespected and mocked for years that rollerbladers would choose the higher road. This is almost certainly people expressing their deepest insecurities that have been built up over the years by tearing down the new kid on the block.

What do they hope to achieve (besides making themselves feel better) by degrading scooters? Are these people going to start a scooter smear campaign similar to what the skateboarding industry unleashed on blading back in the ’90s? As we can all attest, this only emboldens the oppressed. How can these ignorant bladers, young and old alike, be made aware that this is simply history repeating itself and to perpetuate the hate is showing that we’ve learned nothing?

John: History does seem to be repeating itself. One of the interesting aspects of our current rollerblading scene, for me at least, is the way we have attempted to consider our history objectively. By that I’m referring to our acknowledgment that the skateboarders of the mid to late ’90s were kind of right about us. We had no history or culture then, and our pros really hadn’t put much work into the sport when Senate was taking over Pacific Sunwear or when we were first being featured on international television broadcasts. And this was happening alongside people who had dedicated most of their adult lives to their chosen discipline. Granted, hindsight is 20/20 and someone like Arlo has proven to be a True Believer and it was wrong for other athletes to question his dedication. But how many of our other founding bladers have disappeared in the years since?

That last question is kind of beside the point, though. Even if we had proven to be a bunch of interlopers, that wouldn’t have made the response of skateboarders any more moral (to use Shawn White’s word). Just because someone is in a position of undo privilege, it doesn’t make it right for someone else to call him out on it. In the same way, it isn’t right for rollerbladers to project the frustrations we have with our place in the world on scootering, no matter how young or inexperienced the participants of that sport seem to be. In fact, their age and inexperience might make our sport’s treatment of them even worse.

Looking back, specifically on the history of the X-Games, it’s kind of telling that rollerblading and scootering have been vilified to the extent that we have. There have been plenty of other sports that have briefly captured a share of the television audience only to vanish in an instant from the collective consciousness. Think of skysurfing, street luge, bungee jumping and barefoot waterskiing. The fact that rollerblading and scootering are still acknowledged (if only negatively) by Olympic athletes and millionaire skateboarders means, at the very least, that they recognize we aren’t going anywhere.

One difference that I want to point out with regard to rollerblading and scootering is the fact that scootering appears to have learned from our mistakes. Blading came on the scene seemingly out of nowhere and we were basically left to establish an identity and culture only after being cast aside by the media and corporate sponsors. From what I’ve seen, there is no NISS or ASA scooter equivalent and I certainly haven’t happened across scootering on an X-Games broadcast. The sport seems to be doing pretty good without that attention, and it has been around for easily over a decade now. Sam, has the scooter scene made a conscious decision to grow organically on its own terms, or are they just as pissed as rollerbladers to be ignored by the mainstream world of action sports?

Sam: You are right in saying there is huge difference between scootering and rollerblading in its infancy. Though it’s not due to not having a freestyle scootering equivalent to the ASA as it does have the International Scooter Association. It’s definitely not for the fact that it hasn’t been knocking on the X-Games door because it has been for the last few years, setting up ramps outside X-Games events to showcase the sport.

The big difference in rollerblading and freestyle scootering is that although it’s in yet another boom, freestyle scooting has roots that go back some twelve years. Unlike blading the sport grew slowly at first, managing to build a small but solid industry of brands just before the boom hit. It’s the brand owners who have handled the boom in a much better way compared to kids who owned the majority of blading’s biggest brands in the early nineties. It’s these freestyle scooter brand owners who have made the difference and continue to grow the sport and industry with their business acumen and passion for the sport.

The difference in having an industry run by business men who listen to kids over an industry run by kids is very apparent to me and I’m sure all other bladers who work within scootering. I believe it is these people who envisioned and planned how to grow the sport the right way as to avoid what happened with our own industry and sport. It should be no surprise that ninety percent of those scooter brand owners all learnt from the demise of our industry and, even if they were not apart of it, saw it all unfold.

As stated before this is a sport made up of young, happy-go-lucky characters that just get out and ride and let the business end of things get dealt with by the people who deal with the business. This lack of care from riders seems strange to me, but then maybe it’s an age thing. I mean, I don’t remember heads caring about the industry when we were all young and everything was thriving. It’s only since our industry’s demise and the fall in numbers that every other rollerblader has become agony aunt for the hardships we have since gone through.

Is history really repeating itself and if so do we have something to learn from this new sport and its boom? Or is it simply a case of rollerblading being the first of the new boys and therefore the casualty from which all other new extreme sports learn from? Are we the blueprint of what not to do?

John: I think it goes without saying that rollerblading set the standard for how a sport should not go about establishing itself, but I wonder if there is a good way to do it. One thing that I think we have avoided in this conversation is why our industries treat each other as a threat, and a lot of it really comes down to the numbers of participants and the dollars that those participants represent. In preparation for this conversation I watched a bunch of scooter videos online and one of them stuck out to me, partially because I was impressed by the tricks being done, and partially because the kids were riding a lot of famous spots in the Chicago area. I shared one of them on my Facebook page and one of the responses that I received was significant: “Growth in scooters has certainly cut into new rollerbladers and skates sold. Feel free to be nice. Skateboarders saw a threat and dealt with it.”

There is a harsh truth to this statement. It’s impossible to watch a kid on a scooter do a trick on a spot that you are familiar with and not realize that if that kid had grown up 10-15 years earlier it would have been more likely that he would have been skating that ledge on rollerblades. But it’s also possible that he would have been on a skateboard or bike. This is where I think we need to learn from our own history. We shouldn’t be trying to have the largest industry possible. We should make sure the industry we have is healthy and sustainable. Absolutely we should be reaching out to the youth and getting them excited about rollerblading, but we ought to be able to do that without tearing others down.