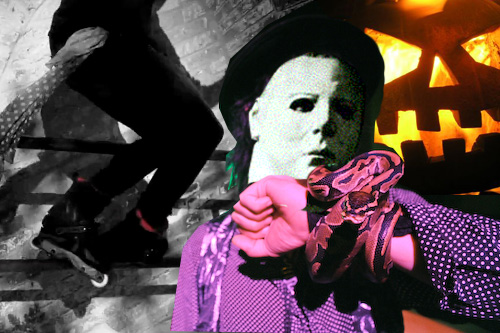 In the last edition of WEB ROLL, I spoke about utilizing the internet and other social media to promote our culture and to help better the industry. This week, Kevin Dowling dropped a Footage Tape interview with blading OG, Vinny Minton. The content of the interview not only put truth to my words but also proved that rollerbladers are not out for the count. Vinny’s talents behind the lens have garnered the attention of some outsiders’ eyes and afforded him some amazing opportunities to showcase his craft…

They go by the names of Red Bull and Glidecam. Red Bull plans to purchase the rights to Vinny’s “A Day in Long Beach edit”, and Glidecam sponsors him, known to showcase his work at tradeshows as an example of the possibilities for use and application of their product. Not to mention, he was contacted by the producers of “House” to help film an episode. These people recognize the unique style of filming Vinny perfected in the blade game and has adapted to capturing weddings and other events. Did I not say something to the effect that eventually, someone outside of our industry would take notice and dig a little deeper? Talent recognizes talent. Even though the skating in Vinny’s edits wasn’t the forefront of their focus, these media outlets and companies appreciated Vinny’s ability to really capture something. A major pull for Vinny and definitely some pull for the blade community. I hope Vinny’s story inspires other skaters to put their stuff out there and develop ways to commercialize skills they’ve learned through their interest in blading — writing, editing, filming and cutting weddings, motion graphics, etc. (Ed’s note: This is what most of your “favorite forgotten/lost pros” are up to these days.) Check out the interview at http://www.footagetape.com/ for the full deal.

It’s Halloween for most but a big weekend for blading too.

Friday night, bladers from all over converged in a fun loving-mass of dudes at The Victoria Theatre in San Francisco for the Valo “4Life” premiere.

Valo has been filming all over the world for this video, I can’t imagine it being anything other than gnarly. Especially since Ivan Narez was the dude behind the camera.

I was talking to Matt Langel the yesterday actually and when I asked him how the premeire went, he had this to say… “I thought the video was well rounded, had some sick hammers and some creative technical shredding. All the Valo dudes held it down, worked hard and put out a really sick video.”

I was lucky enough to go to the “Game Theory” premiere in Encinitas and there’s just a certain feeling, a collective vibe at these events. When you see a video on the big screen, sitting next to the dude who fell hundreds of times to get all of the clips you’re watching, it’s just a whole different experience than any online edit or DVD could provide…

As if that wasn’t reason enough to put down your pumpkin (or if you’re a dandy little hipster like me, your Starbucks Pumpkin spiced latte) and get out of town 4THEWEEKEND, maybe you’d rather go to Dallas, Texas for the 14th annual live updates all weekend. I was lucky enough to meet Freddy just last week. He is on a month-(or so) long journey through our nation and he stopped in Phoenix for a few days. (I might add, he is quite a cool chap.)

*JUST IN: CJ WON THE HOEDOWN*

Over 130 athletes and spectators filed into The Hanger for the contest. It was surprisingly difficult to find photos or edits of the contest, but Ripstyle sent us this one.

I’m still bitter I couldn’t attend any one of these events due to a stack of homework and other responsibilities piling up deep enough that they are threatening to engulf my left leg. Luckily, my friends are kind enough to post pics on their Facebook, Tumblr and Twitter accounts, you know, just in case I forgot that I couldn’t go. Last year, this very weekend I was going Mach 10 across the desert in Chad Hornish’ Chevy Cavalier (so, like, 55 mph) en route to the WRS Finals in Las Vegas, NV. Today, I’m sitting at my desk with a giant bag of Flaming Hot Cheetos and a Starbucks. Typing and revising this column, drafting a newspaper article and maybe doing some Netflix-steez procrastinating.

Ripstyle® is born from the same talent that it recognizes every day. We support talent in every genre, in any discipline. We recognize a limitless future, without setting parameters. We promote potential. Ripstyle® as a brand is about the infamy of the antihero transformed to champion. We are the ultimate underdogs, the black sheep and proud of it. We invite you to come and see what Ripstyle® is all about. We are the runners on the track, we are the ninjas of the street, we are the pilots of the racers, we are the prowlers of shadows, we are commanders of dance floors and dreams. Unified like the consciousness of Shaolin monks.

Ripstyle is proud to support the inline skating, the black sheep of action sports. We have assembled a team of the industries finest talent. The underground legends who changed the game, the designers who set the standards you now live by and tomorrows super stars.

The 2010 Team is debuting the first series of Ripstyle Limited Edition T-shirts. All shirts are made from the highest quality natural cotton. Soft with designed fit, they soon become statement and uniform.

Yeah, that last name on the team roster got me pretty stoked too…

In non-blade news, voters everywhere are up in arms over the coming elections this week. 2010 may be the year that Marijuana finally becomes legalized, at least in some states and depending on if you’re dying of cancer or simply looking to get high. However, albeit making stoners everywhere happy and boosting the sales for Visine, Taco Bell and Bob Marley memorabilia, this represents a monumental change in American history. Think of it in the same regard as the end of prohibition in the 1920s. (Besides, now the govt. can focus all of their attention on banning the new evil. The next level in brain-cell destruction and underage consumption. FOUR LOCO!!!!)

We live in crazy times. Apple and other technological pioneers are continuously releasing products that have been seemingly stripped from the minds of Aldous Huxley, George Orwell or Ray Bradbury. Morgan Freeman gave up his claim to the title of First Black President to Barack Obama and we may be coming closer to the end of our financial crisis with the help of a different kind of green.

I’ll save the ranting for next time, it’s Halloween and happy hour is drawing nearer and nearer. I hope, if you’ve been m.i.a. from the blading world for the past two weeks, that my words gleamed, albeit morosely, like a candle flickering through a rotting jack-oh-latern. And to wit: here’s something to close out on in the spirit.