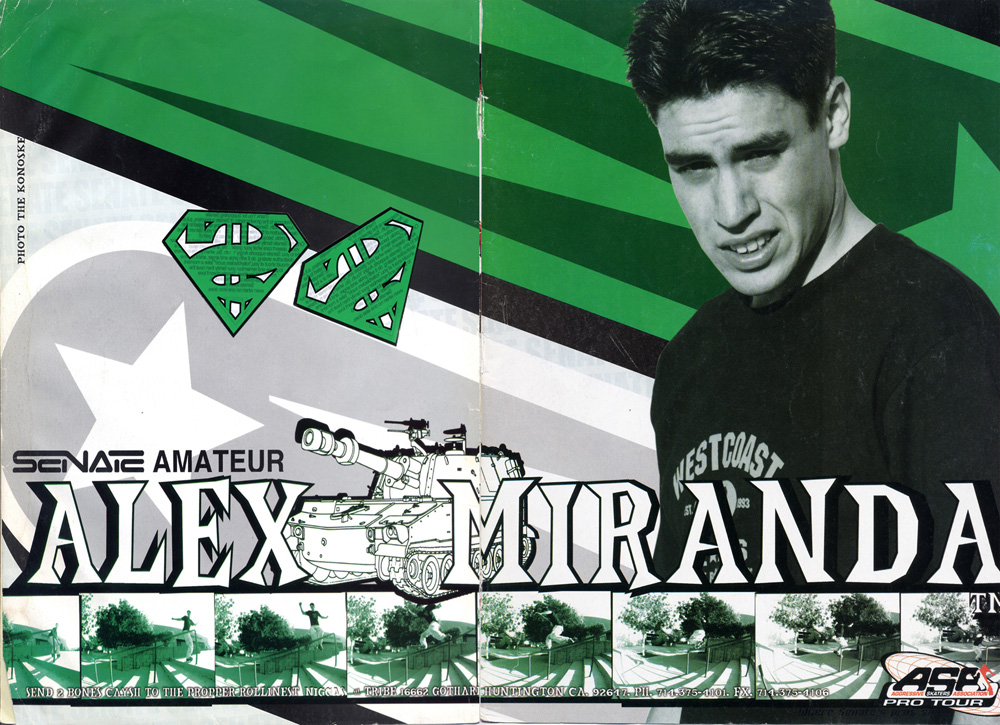 AM 4 life… Alex Miranda, lots of people have an opinion on who Alex is. Some think they know him, few actually do. I’ve known him since we were kids, 12 or 13 years old. When he was still rocking a rat-tail under his A’s cap and wearing a Bash Bros. t-shirt. The first thing we had in common was our favorite baseball player, Jose Canseco… this was before steroids were really illegal. We became friends, and began chillin’, playing football, baseball, BMXing, or whatever the flavor of the month was. In ’93–’94, rollerblading began to consume us. We saw a great opportunity to be original and have our own crew that did something no one else did at that time. Shortly after that, we were known throughout the city as “Bladers.” Alex had a style that stood out from the rest of us. When Alex skates he strives for perfection, just landing isn’t good enough. There’s a sense of unity when Alex locks on a grind; it seems that he attaches himself to it, while making sure his shirt and hat always match. Alex was getting into the OC scene, skating with Randy Spizer, Arlo Eisenberg and the Senate guys. He was eventually placed on the Senate team, putting his name next to skaters like Louie Zamora, Josh Petty, TJ Webber and B Love. What most people don’t know about Alex is his life outside of rollerblading. I’m sure that there are kids out there who can relate to family issues, health problems and trouble with the law. Alex has had a fair share of ups and downs, but through the fog, he has emerged with a new perspective on life. Alex is a person who can make you laugh one minute and maybe get under your skin the next, but one thing that’s consistent with Alex is that he is always himself, whether you like it or not. — Carlos Kessell

Hey thanks for taking the time to sit with us, peeps want to know whats up with Alex Miranda. Remember way back in ’94, when you put on your brother’s size twelve Lightnings, painted three stripes on the side, and hooked up with the OG 909 skate crew? Tell us about those days.

Oh yeah, way back, huh? They were my brother’s blades ’cause he bought them! He basically bought them for me. He took a bad slam down a hill and that was a rap for him. He retired early, lol. We loved the b boy thing then, so you know where the Adidas stripes came from. And as far as the 909 goes, that’s when it all started. Met you all in junior high. My bro driving us around looking for skate spots in his ’63 bug on the weekends. Those were good ol’ days with you (Carlos), Jason Goff, Jacob Stutzman, and Rene Negrette. Chino Hills was good to us. Great memories.

Who was the first skater you looked up to?

Wow, seriously? That would have to be you my man! Carlos Kessell. I always jocked your moves. I had never seen a blade video then, so every time we went out you were doing something new. Kept me motivated for sure. Then it was Arlo. “Hoax” and “Mad Beef” days.

How did you hook up with Senate, and what did that do for you as a skater?

I ran into Randy Spizer at a skate park in early ’96. I was skating Oxygens at the time. He saw me landing cool stuff and we just started talking. We swapped numbers and started skating more often. So basically through Randy, then the rest of the Senate team saw me blading. They were down for me and I became a rider of theirs. I felt at the time that it was coolest thing ever. I got to travel, shoot photos… filming with Brian Konoske was always fun, too. Senate got my name out there, and I always appreciate them for that.

What did Mark Heineken tell you when they dropped you and the whole original team from Senate?

Ha, ha! Nothing! Josh Petty told me at RSA Inline in Costa Mesa. At the time I was in my own world. I’d met a girl that made me forget about blading. I hardly skated, so I understood. They wanted a fresh new look with new faces. All good. I learned to value my sponsors from that. Doesn’t matter either, Senate has been long dead, lol. Oh, all my lil homies out there shreddin’, go buy Remz.

You were hangin with the FP crew for a while, and had a pretty nice section in “Amateur.” What were those days like?

FP was the banger crew! I really appreciate Kevin Gillan and Aaron Feinberg for always being real with me then and now. And to be honest, I was hurt during the filming of “Amateur.” So I really never liked that section, ha ha. I feel I’m way better now.

I remember when you had to move from Chino Hills to Orange County. Why did you move, and how did your life change because of it?

My parents split. Dad bounced to who knows where, so I went to live with my mom. It changed for the better. I met a lot of cool people, with the usual ups and downs along the way. But all of that makes you a wiser person. OC is my home. I’ll never leave it.

You kinda disappeared from the scene for a few years, were you still skating? What happened during those years?

Yeah man, I guess you can say “life” happened. Hangin’ with the wrong crowd, got in to a little trouble for growing some trees and just overall being a dumb ass, ha ha. But looking back, it was all worth it. Some people gotta learn the hard way. And yeah, I was still blading, we just never filmed. I think I hate the camera.

Out of the blue you suddenly showed up in edits and started to go to contests and skate sessions. What sparked this resurgence? To me, it looks like you currently have a more positive outlook on life, is this true?

Yes. These last five years Demetrios and Rachard have helped so much with skates and product and overall just being real good friends. With that, I was able to gain the confidence to roll hard again. I really appreciate those two. And as for life, so juiced on it! Blading keeps me young at heart.

Any last words or shout outs?

If you love to blade, stand up for it. I’ve been blading since 1993 because I love it. “Blade or die” is the new motto.

Shout outs to: Dem George, Rachard Johnson , Kato and Haffey over at Remz.com, Jess D at 50/fifty.com, Arlo at Gost.com, and Aarin Gates (I love you!). Oh shit, and you, thanks LOS!

Wait, damn, I can’t forgot my mom, sister and brother, thanks.

Respect for staying in the game and keeping it real!!

Such an amazing interview.It is great to see Alex holding it down for so long,his skating and style are timeless.

Aarin great photos. Alex you deserve this man, keep rollin for the 30 somethings.

Still such a good skater after all these years, very motivating to see

Thanks One Mag for this little interview. Alex defiantly deserves it. Sick new photos!! That stale 180 is money!!!

Damn, havent heard anything about Alex in a long time. Im glad to hear he’s still in the game.

I used to roll around with these cats because I was best friends with David Stutzman back in Chino Hills. Alex is as real as they get. We used to skate the same spots.ayala, community park, chafey, ontario high, irwindale skate park.we were totally stoked when the soap shoes came out too.man those were the good old days.