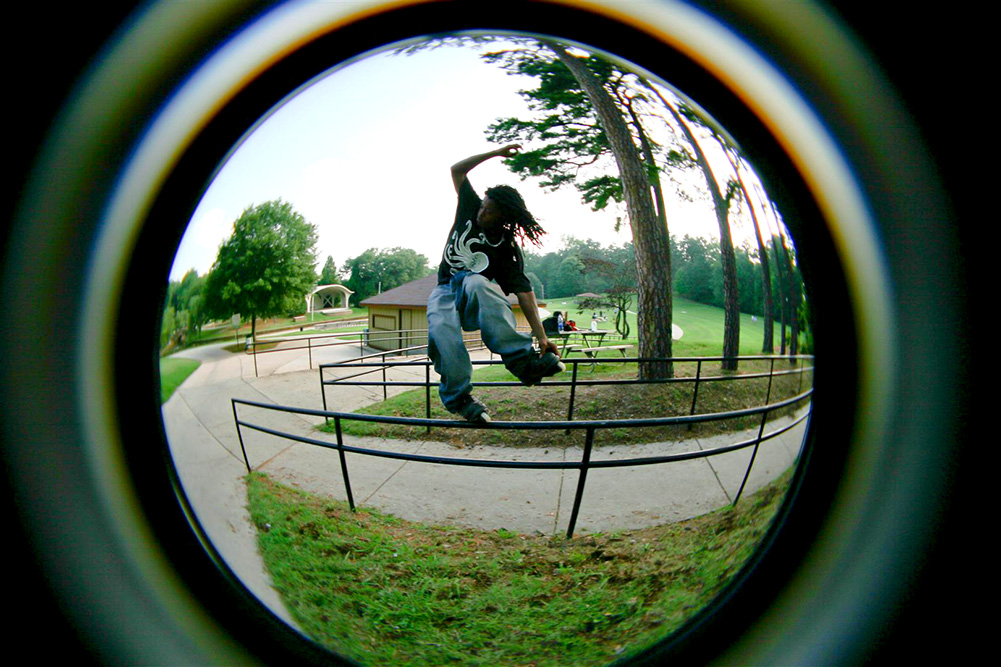 Name: Cletus Kuhn
Age: 30
Hometown: Albuquerque, NM
Years Skating: 15
Equipment: Rebel XTI, Canon 60D
About Me: I’ve been a Mechanical Engineer, officially, for eight years now. I’ve been rollerblading since… well, I can’t exactly remember. Second grade? I’ve been a computer nerd since about then, too. I started shooting photos about five years ago when I was finally able to afford a decent camera of my own. Then I made my way from New Mexico to North Carolina in late 2006 after finishing grad school in Fort Collins.

Over the course of three years as an engineer in the Nascar industry — traveling to track after track, encircled by the incessant roar of engines — I had two or three articles published in Racecar Engineering Magazine, which was quite rewarding. But what I appreciated most about moving to North Carolina was that it unexpectedly put me in a location to experience rollerblading as I never had before. After several months of skating the box alone in front of my house, I met up with some bladers from Charlotte, a few being pioneers of what the sport is today. I also attended the last two Superhick comps, which — unacceptably — over sixteen years of aggressive skating were the first and only two professional competitions I have ever seen in person.

After a few years of living in the south, a rough turn in the economy led me back to Albuquerque. It’s just one of those places you can’t stay away from, and you just can’t beat skating with your hometown crew. Every year we travel up to Colorado for the Road Trip, Mile High Battle, and Smiley’s BladeBQ in Fort Collins. Sometimes we are fortunate to see a visit from some good friends, or the occasional tour that might come through Albuquerque.

Over the years I have been lucky enough to be in the right place at the right time to capture some great people doing what they do. I’m thankful for the lifelong friends I’ve made through rollerblading in all of the places I’ve lived, and I am so appreciative that this sport attracts such generous and talented people.

The following are some photos from my travels. The guys at ONE broke the series into two posts, so be sure to check back for more soon. Enjoy these memories…

This was the first INDYcar event I attended while working as an engineer. The company was involved in so many forms of racing that it provided a good variety of challenges for me. For this shot, I snuck my way over to the pit lane entrance and snapped this frame from just behind the barrier. Kansas City, MO 2007

Ben Weiss / Soul Drop to Fakie In the Quarter / Atlanta, GA / 2007
Superhick 2007. This stunt was everywhere in videos, and I’m sure there were a number of other pictures that were actually seen by people. (Ed’s Note: Pretty sure that’s Wes Driver* kneeling in the foreground, getting the shot for REJECTS.) For this shot I managed to steal a flash from someone else*, and I like it because it really gets the point across: Ben looks so small up there at the top of the warehouse. It was an incredible stunt.