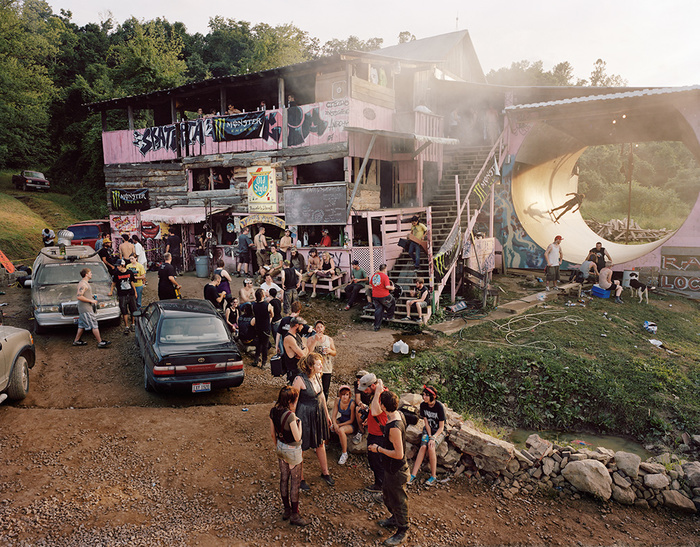 A Rollerblader in Skatopia’s Court

Out in the wilds of southern Ohio there lies a lawless 88 acres of nearly sovereign land created by and for skateboarders. It’s called Skatopia, and you’ve probably heard of it.

And this is how it’s described on Wikipedia:

Skatopia is an eighty-eight acre skatepark near Rutland, Ohio owned and operated by pro skater Brewce Martin. Skatopia is known for its anarchist atmosphere and annual music festivals Bowl Bash and Backwoods Blowout.”

As a rollerblader from northeastern Ohio that had been invited on several occasions to check out the “skatepark,” from any magazine or video coverage one thing was clear — Skatopia is probably not the best place for a blader. Especially a lone blader.

And so I never went, though often wondered what it would have been like. I also didn’t want to find out what it was like to get jumped by untold numbers of dudes that hated me for the plastic and fiberglass on my feet, but hey — I’m a pussy.

Anyway, part of what makes Skatopia so interesting and definitely what made it possible is the main man himself, Brewce Martin. 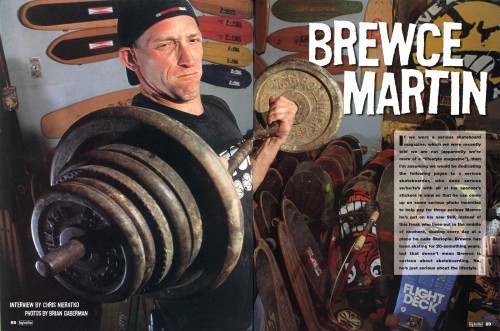 I wish I could find the Contents page spread from this issue so you could see a sequence of Brewce doing a one-armed clapping push up. Dude is no fucking joke.

And you have to be no joke to set up a haven for off-the-grid craziness and freedom like he’s created. It’s very commendable from a cultural and social perspective. Live Free and Skate Hard. Read the text on that BB photo and it paints a pretty accurate picture.

The reason I’m talking about any of this is because while reading an article on Vice.com the other day (thanks Paper app for serving me up some good content!) about Skatopia something caught my eye. Not exactly the photo of the grimy gutter punk dude standing in the road with a sledgehammer while a car burnt wildly behind him. No, what caught me was a name. And that name was Morgan Ashcom.

A quick Google search confirmed what years of blade immersion had instantly spotted: Morgan Ashcom was a rollerblader.

You may remember his video projects like Broke and 1MM, which actually won the BIG BREAK contest that Empire Distribution ran back in ’03/’04.

Morgan is from Virginia and I remembered that he knew my homie Ben Rogers. I hit up Ben and he confirmed that Morgan was the Morgan.

To be clear, the article (located HERE) was such: Morgan is a documentary photographer, and he had spent considerable time at Skatopia documenting the community that calls it home, so Vice interviewed him about his photos and Skatopia.

Then right there in the short interview are the words I was most curious about:

Mossless: Do you skate?
Morgan Ashcom: No, not anymore. I skated from the time I was about 12 years old until I was 26. I had broken a lot of bones and was starting to feel twice my age, so I stopped.”

My first reaction: that was diabolically genius! Best, most natural deflection ever — no wonder the guy was able to shoot and live amongst the Skatopia army.

Following up, I went onto Morgan’s website and found more of his photos (you should check them all out) and saw another interesting thing:

From an early age I began using a video camera to document my friends skateboarding and rollerblading.”

So contrary to my initial suspicion, it was spelled out clearly in black and white: “rollerblading.” If anything it was good for a “Respect x100 Bonus” in the game of life. But the big question about how much of this Skatopia knew was still unanswered, so I reached out to Morgan by email.

What followed was a quick reply and a reminder that we’d met at a contest in the south sometime in the early Aughts. Small world! Then we got on to other things and dug deeper into his accounts of the time he spent in Ohio.

Sadly for you readers the details of those experiences were divulged only under the promise of confidentiality, in hopes of allowing the photos to continue to speak for themselves. But the takeaway was this — Morgan Ashcom is a rollerblader and got into and out of Skatopia alive. And not just alive, with new friendships forged on trust and mutual understanding.

For most of us, that’s the most we can expect out of life, love and even rollerblading.

Cheers to Morgan and all rollerblader creators (even former rollerblader creators) for the success in their chosen fields. And let this little story serve as a reminder to keep your mind open. Stigmas and prejudices are powerful forces that can prevent us from truly seeing and appreciating the world around us. And that’s the biggest bummer of all.

Noted ramp builder Aaron Durand (of the late LA All Day construction fame) is from Ohio and says he’s bladed at Skatopia 1,000s of times, even living there for two months with an ex-wife in 2010. Here’s a comment he left on our FB page:

I’ll never forget the time Brewce threw a broke-off pick axe at my x wife [sic], I deflected it with a moving box and it still hit her wrist. He then grabbed a 2×4 and rared back as I approached him. He swang, I turned and let it break over my back… I then grabbed him by the shirt, looked him in the eyes and told him I loved him… I could never swing on him… He’s my brother and hero. We’re still good friends… Another day in the life of Skatopia.. Long live the Pope! The Shiek Blades…”

Stay tuned as the story develops…