Rollerbladers often reminisce about their favorite skaters from back in the day with a tinge of disappointment in their voices, wondering what happened to their childhood heroes, and then trade stories about their possible whereabouts. It is how legends are born. They stop seeing their favorite skater in videos and believe that they quit, abandoned, or turned their back on skating, which is often far from the truth. In all of my travels and inebriated late night conversations about the old school with bladers from Greensboro, N.C. to Prague, Czech Republic, one name always seems to come up. Jay Dick. The conversations always seemed to end with “Jay Dick, what the fuck happened to that guy?” followed by a few seconds of silence. Jay Dick’s skating encapsulates a period of time. Confidently skating at big kink rails and unitying them with ease in Majestic 12s and a Hardline shirt with baggy pants, Jay was the epitome of ’90s blading cool. He put out some dope sections then seemed to disappear like the J.D. Salinger of rollerblading. As I have found to be the case with a lot of old skaters, blading never really left Jay’s mind. We talked about his life, growing up around the industry, Hardline, the filming and editing of his classic “Hoax 3” section, why he stopped skating, and what he is up to now. I am very proud to present to you this interview, and on behalf of the entire rollerblading community, welcome back Jay. We have missed you. — Ben Rogers

Tell me about your life before skating. Where did you grow up? What were you into before you found skating?
Well, first and foremost, written English has never been my forte, and my answers will jump all over the place; so bear with me. Also, I tend to drone on and on… Life before skating… well, I grew up in North Carolina, cities like Apex, Winston Salem, Chapel Hill, Durham, and Raleigh. My parents got separated a few weeks after I was born. Before skating, I was involved in soccer, like lots of kids; it was kind of boring. I used to go fishing a lot when I was younger, which I actually picked up again a few years ago and I still love it. In the summers I would usually be sent to camp called “Camp Clearwater,” affiliated with YMCA. There was this DJ (camp counselor) there named Roman Hines, who would spin records at camp functions and everyone would have good times. I could go on and on, but the summary is that of a country boy with a southern accent.

What got you into skating? Who did you start skating with? Was your family supportive of your skating?
In the years that led up to skating as I grew to know it, I played street hockey and tag with friends on skates. I’m talking 4th grade (1988) through 6th grade. In the 4th grade I moved to California with my mom, brother, and Sstepfather, and that’s when I got my first rollerblades. I think they were Ultrawheels brand. I had so much energy I would literally go and skate all day, every day. Wayne Gretzky had just come to the L.A. Kings and ice hockey was too expensive, but rollerblading was perfect. So it started with street hockey. A bunch of us would use rollerblades as a means of transportation to hang out, and on the way there were curbs, banks, stairs, etc. So we would roll down stairs, jump tiny gaps, ride off of curbs. There was a guy down the street from a friend of mine that introduced the whole idea of doing those tricks to most of us around the neighborhood. He had a ramp and there was always a Team Rollerblade van outside. My friend was a speed skater (on inline skates) and also played street hockey, and this kid was really fast. His name was Matt Davis. He started to get hip to things being around the speed skating scene, I guess, and it bled over to the rest of us. It was around that time when I started to actually play other games on skates. I think at some point Matt was given a couple videos… ”Dare to Air,” and I think that was the official introduction. It’s been a while so don’t quote me.

For a while in middle school, the skateboarders and rollerbladers would all skate together, all the time, so everyone knew of all the spots to skate at, more or less. The summer before my freshman year in high school I was sent to live with my Dad for a year. I remember talking to him about skating and how much I enjoyed it. One day after work he decided to take me to get some skates, even though there was really nowhere near the log cabin he lived in for me to skate. The roads were made of gravel or dirt, which was exactly the reason I didn’t bring my skates in the first place. Mind you this was about ’92 or 1993. Anyways, that was the day I think that kept me skating when the door to let it go was wide open. At that point I didn’t know if I would ever go back to California. I would go to work with him instead of staying at home when there was no school and just skate around Chapel Hill all day. I remember skating around UNC campus, up and down Franklin Street, through the University Mall. It was wild because I never saw anyone else skating there. That year I think was the year that movie “Airborne” came out in theaters. I had been skating for about 4-5 years already. It was funny because the story line was something I could relate to. Kid lives in Cali, waves, sand, etc. and gets pushed into seemingly the middle of nowhere. Similarly, once again, I was the new kid, but skating really helped me relax and feel “normal” in the soccer-obsessed land of the Tar Heels. 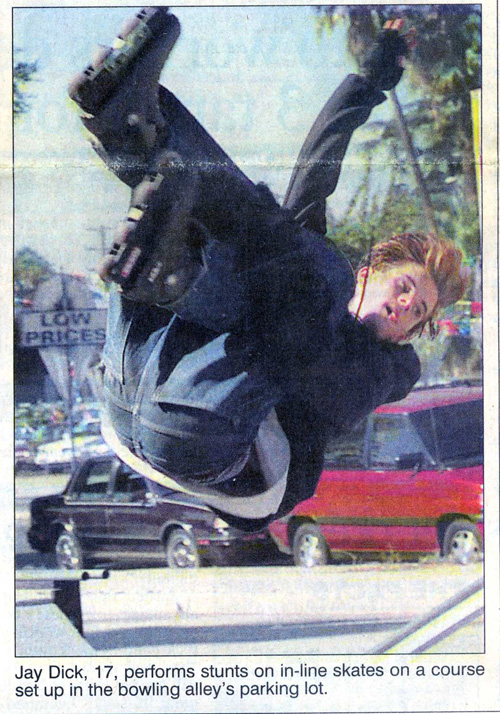 I moved back to California my sophomore year. I think that’s around the time I met A.J. Jackson, Tracy White, and Ralph Koch. I would skate with my friends Matt, Mark, Kevin, and some locals. For about a year there was a group of about 15-20 skaters that would skate every day; good times.   My mom was relieved that I had an outlet and that I was so focused on it. It’s cliché, but true. Being that she always supported anything I was into, skating was no different. In fact, her and Evans, my step-father, both always (and still to this day) encourage all that I delve into; truly priceless.