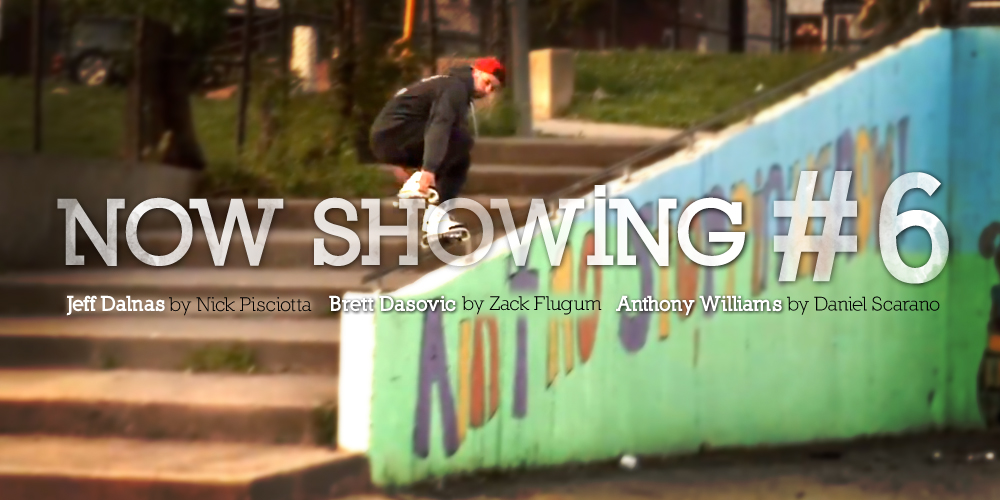 Topping the list this time around is an amazing edit by USD’s Jeff Dalnas, shot and dropped via Nick Pisciotta, along with some help from the homies (credits listed on the Vimeo page). I reviewed a previous edit of Dalnas not long ago and much of what I said then applies the same now and I don’t want to rehash a lot of the same stuff.

One thing I do want to spend a little extra time on was how much I enjoyed the song. In the video’s info section, Nick linked to the artist’s website, so I had to check it out and found you can actually download the album there for free. Very reminiscent of the tracks James Reetzke use to cut for Life+ and other videos.

Some of the highlights include his very first trick and how easy he makes switching from backslide to oop fish look. He laces an incredibly statue backslide that I saw even getting some props from the OG Bladers Facebook page. Jeff seems to have really stepped up his backslide game — there are a handful more backslides throughout that are all very impressive. He throws a pretty scary looking gap over a toe clipper rail to disaster soul. He souls to true top soul to 720 out on a kink rail. And of course his ending banger top soul down a nice sized drop off kink rail that has an added drop from the flat to the second down set.

As much as I love this edit, it never feels complete unless I find at least one thing to critique — people deserve honest feedback and it’s become pretty rare these days in the bi-polar blade world. So I’d have to say, as much as I liked the song, its extremely mellow vibe doesn’t really match the burliness of his tricks. Imagine Carlos Pianoski shredding to some smooth jazz. But at the same time, Dalnas makes it all seem so easy in some ways it actually does seem to fit.

The distinction between pro and am isn’t always clear in rollerblading. By definition it’s just somebody who gets paid, but I don’t think that can really apply to blading with its limited budgets. But if you are just looking at the important qualities in a skater, I would definitely consider Brett Dasovic a top pro right now. Just watch this edit and tell me I’m lying. Just look at his list of online profiles and DVDs from recent years. Just look at the way he came up in the harsh decade of the internet and how cool headed he has been through the trash talk, never shying away or letting it turn him into a bitter old blader.

If you’ve read any of my reviews before you can probably already guess that I wasn’t a big fan of the song, so I don’t want to spend a lot of time on that, but I do want to point out the fact that my dislike for it only speaks more highly of the skating and filming itself, because I’m still highlighting it as one of the best of the summer despite how much I dislike the song.

Dasovic’s style makes every trick that much better. Lacing a long fishbrain on an awkwardly low ledge early on in the edit sets the bar high right away. Not that it’s a good comparison between myself and someone like Brett, but I’ve alway found topsides on low ledges much harder than on regular height ledges — it just puts so much more strain on your knees — but Brett laces it like a boss. He pulls a number of low grinds on the awkward edges of ledges and stairs. Although it wasn’t his ender, I personally felt the craziest trick by far in this edit was the 30 or more stair backside royale on a grimy looking ledge that barely stuck out above the stairs. I would actually put this trick on a larger list of, say, best tricks of the year or something like that.

His actual ending clip wasn’t too shabby either. Bouncing off the flat of a kink rail to gap over a wall to drop. Other highlights include a fishbrain off a “poll jam” as our skateboarder friends would call it. Brett’s patented alley-oop top souls of course, a backside royale on an angled brick bank to shuffle down a small set of stairs, a pretty gnarly slash stance frontside, the lists goes on, but it’s much more fun to watch. So watch!

Anthony Williams has been in the spotlight a bit here and there, but I would still consider him to be a fairly underrated skater. Williams seems like a pretty big guy and definitely skates with a lot of grown man steeze. He has a really powerful bounce to all his switch-ups and even in the way he just seems to man handle rails and ledges.

Heavy on the grinds, but he mixes it up with some lines and a couple creative combos during the first song, like switch back roy to bench roll to 270 back roy the other way. Some pretty scary grinds over the death ledge seen in this Photo Journal by ONE photographer Megan Petersen. He even gets emo for a second with a true spin negative misfit. He just brings a really strong overall portfolio of grinds, with such solid execution it makes you feel like an judge in the Olympics just trying to find that one little misstep so you can deduct a fraction of a point, but you can’t.

The two songs fit his style well. The filming and editing are to the point and enjoyable. Some funny clips in the mix as well — just seeing people smile in their edits always seems to make it more enjoyable, knowing they are having fun. So two thumbs up to both Daniel Scarano and Anthony Williams on this edit and the entire “Natural Order” online video.