A dynasty is taking shape in front of our eyes. For the second year in a row Eugen Enin has earned the title of SKATER OF THE YEAR, so we’re taking this opportunity to share words and photos created for Issue #23‘s SOTY profile — plus showcase Eugen’s section from JUST BLADE. As a new year takes shape and previous efforts are celebrated, we are confident that many share our excitement to see what Eugen brings to our 2018, and beyond! Congrats to the man of the hour for his continued to success, and special thanks to the hard work of Sam Cooper and Daniel Enin who helped make all of this possible. Cheers!

Recap for everyone all the edits you dropped in 2016. How much do you think that output influenced people all over the world to vote for you as Skater of the Year?
Way too many to name them all. Several Borklynzoo edits and Archive episodes, a couple of Powerslide FSK Edits, a few edits for USD, Kizer and Undercover plus, our VOD which is kind of three profiles, ha ha. And SOTA was released in 2016 and I have a profile in that too.

For sure that amount of content influenced my nomination, but I think my developing process was more important. In my eyes I did even more in 2015 — if it comes to free online videos, plus I filmed my whole SOTA profile in that year and a part of my VOD too. But for me the most important thing was always to progress and work on my blading and myself in general… and it still is!

And what does that recognition mean to you?
Personally I really appreciate all the support and feedback. I can’t believe it all the time… but I don’t overthink it.

I guess it’s a good time to ask, what’s the biggest success you’ve achieved in blading to date? Most people would say getting a pro skate or wheel — which are obviously awesome milestones. But maybe you’re sitting on some secrets most of us don’t know…
Hmmm, I think for me, the biggest success was the experience I earned through all the trips, projects and people I met during all these years. That has made me who I am today.

You’ve been a part of the USD family for a long time, but I don’t remember if you’ve told us how you partnered up with them. What’s the story, how did you get involved?
It all started in 2010 after the Real Street series in Germany. I tried my best at some contests and got some good rankings. After that I received an email from USD asking me if I wanted to skate for their flow team.

What about the story of how you found blades in the first place; who or what is responsible for your discovery of rollerblading?
My parents bought me some K2 fitness skates when I was like eight or nine. After that I started jumping around with my homies, so we checked out the local skatepark. I directly fell in love with blading when I saw the local dudes killing it. So I started annoying my parents to get some aggro skates. Luckily my uncle had a homie that sold me his Salomon ST8s. Even though they were the brown ones I still loved them! This was when the skatepark was my second home and I spent most of my free time there. But it took me way too long to discover the rollerblading culture — videos and the rest. One of the first videos that I saw was actually Killerboots, but then I watched all the classics and literally studied what I saw. 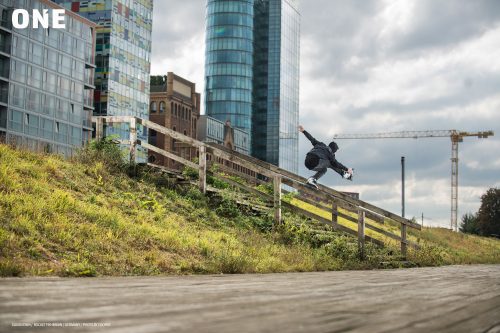 Some dudes skate just to film, and can for for a week or more without much skating then grab something choice. Other guys skate every day to stay loose and keep the blood pumping. What’s your preferred routine? Does that change with the seasons and whether or not you’re working on a project?
It never changed in my case… I’m addicted. I feel better when I strap on my blades, even if it’s only to cruise around. So I’m blading as much as possible, even though I’m not filming for a project or something. Putting my blades on gives me that bit of freedom that makes me lucky even if it’s only a session at the local park.

For the cover I sent you a Lebron James #23 jersey so we could homage the old DB #23 cover while showing how like Jordan’s number passed on to a younger prodigy, you and your skating represents so much of the future. What did you think when I told you about the plan and the jersey showed up?
I felt honored and still do, maybe a bit under pressure too. But I really liked the idea of recreating that shot.

Now that you’re getting a lot of international recognition I’m sure people from all over hit you up. What have you learned about bladers (and people from different countries and areas) now that so many different sorts of personalities look to you for approval/acceptance/role model?
I learned a lot… mostly about people in general. I always try to answer everybody and be as nice as possible, but for sure there are some assholes out there. It took me a long time to learn to distance myself from that. But then all the positive experiences and memories I get through the people I’ve met over the years is so incredible, it lets me forget everything negative all the time.

Along those lines, if someone has only ever read about you online or watched you in edits, what about you might surprise them if you met and spent time together in person?
There are times where I’m hyperactive if I’m not blading and can get really annoying. But when feeling balanced I’m pretty much a boring dude to hang out with, hahaha, just lazy and chilled. I’m into animes and I enjoy Adam Sandler movies, even though I know everybody hates on them. I love cats, especially funny cat videos or animal videos in general. I’m in love with the old Dave Chappelle skits. I’m never go anywhere without my iPod. 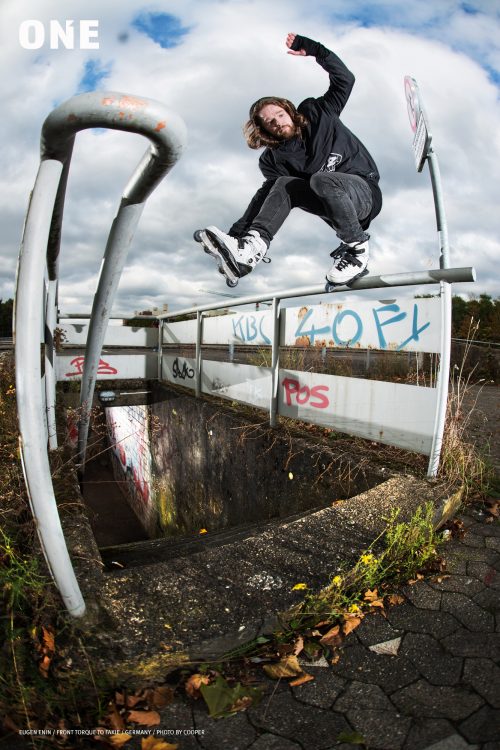 I know you’re a huge fan of blade history — so let’s change gears a bit. What in your opinion are the most important tricks done throughout blading?
That’s a tough one. Way too hard to answer that. But I would say the developing of grinds in general, like the first topside, etc., and everything that’s pushing the boundaries like big stunt tricks. But on the other hand, minimalistic, super smooth tricks, or technical wizard stuff too. So that answer is different for every person since everybody has their own preferences.

Maybe not as true now but definitely years ago when media was more centralized with fewer options, but how important was where you saw a photo or read about someone? You can imagine I’ve heard a lot about that over the years…
I kinda started when almost no rollerblading magazines were left, so was already used to the online media. But of course it was really special to me to read and hold a rollerblading magazine in my hands.

What about on the product front — what have been the most important hardware developments in your mind? And how have they impacted the sport?
Good quality wheels, proper frames for all needs, anti, flat, big wheels, etc., are some of the most important things in my eyes. Carbon/plastic skates with built-in liners, light and super low hard boots like the SL and the Aeon are a super nice developments too. Especially Xsjado — that’s one of my favorite concepts.

We’ve seen you skating big wheel, tri-wheel and now the new Kaze mount from Powerslide. It’s easy to imagine how your street skating experience influences your free skating, but what about the other way around? Have you had any inspirations while cruising around?
Definitely! When I had my shoulder injury in 2016 I was only skating FSK for a bit and it felt weird to get back to baby wheels… you feel so slow and not so flexible or responsive. But I definitely noticed that I tried to move more smoothly like with bigger wheels. And since then I love to blade more FSK from time to time. It shows you how much fun rolling by itself can be and makes you concentrate more on that element. That helps you a lot to get cleaner and smoother lines when blading in general. It’s like when we all started, it was all about rolling and jumping. Then you got your first aggro blades and grinding started to dominate your blading. But there is soooo much more to do. So yes, big wheel, FSK, etc. inspires me a lot.

Back Front Torque to Fakie

What do you think could create the “shock moment” that generates the necessary momentum for blading to get more market share in the recreational sports market?
There are tons of theoretical things that could create such a moment but in reality it’s really hard to force that… since trends or hypes are often happening by themselves and are die out really fast too. I don’t think that a specific event or moment like that would give rollerblading a realistic revival. At least not in the long term.

Read more of our interview with Eugen and see more photos in Issue #23. Available in blade shops everywhere or order a copy HERE.

All photos by Sam Cooper