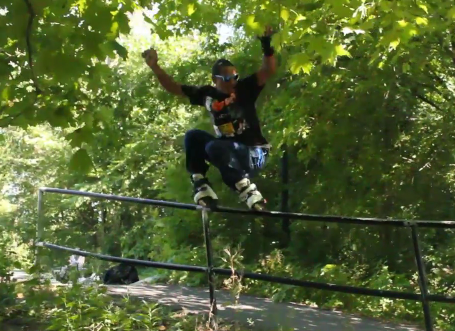 Gypsy Production presents FAMILY MATTERS 2
A ROLLERBLADING & LIFESTYLE FILM
———————————-
Family Matters started of as a video project with a crew of gypsy skaters from Montreal. The video was filmed with a VX2000 Between the months of April and July 2010 and edited in a day or two. Montreal is a multicultural city with all kinds of people, the skaters here all come from different backgrounds working different careers; French baker, architect, stuntman and plain Gypsies. Skating is the one passion that managed to gather all these individuals together and with it grew friendships behond skating. After sessions are always good times, the night life is really exciting and you can always find a group of the skating scene out partying and most times all the original Family Matters crew out together enjoying this amazing city.

After a not in HD DVD and a Canadian tour, in 2011 Family Matters is growing into something bigger than just a bunch of friends filming. This year Family Matters is a big project for the montreal scene. The guys are putting different events together such as a bowl contest at Le Taz, a street contest, BBQ sessions, video premieres just a ton of motivation for the kids. Giving back to skating what they have received from it; a lot of love. To this “Family Matters II” is a bigger more serious project, involving the entire montreal skate scene. This time filmed in HD with more riders, this will be a real representation of Montreal 2011.