When Jeff Dalnas wrapped filming/shooting for his 2016 ONE Blade Life here in San Diego, he offered up the not-all-too-uncommon “See you again soon.” Less than one year later we realize he meant it. In March, Jeff flew himself to San Diego once again to do a “blade cation” while Sean Macgowan and Steve Steinmetz worked their shutters. The result is another freemium Blade Life photo + edit + interview capsule, made possible by the hard work and determination of one of our generation’s longest-shredding bladers. Respect to Jeff! Now strap in for another discussion about what makes this singular New England personality tick.

How many, Jeff — how many years on skates as of today?
This summer will be 22 years on the skates.

When was your peak? I don’t mean “was” like it’s not now, but you tell us!
Oh, that’s tough to say. My confidence/focus level comes in waves. I go through phases of  skating on point or with more passion from time to time, depending on what I got going on outside of skating. But probably when I was 12-14! For that time period, I feel like I might of been ahead of the game or at the top. But that was before the internet was big so I feel like I was a little unnoticed back then. 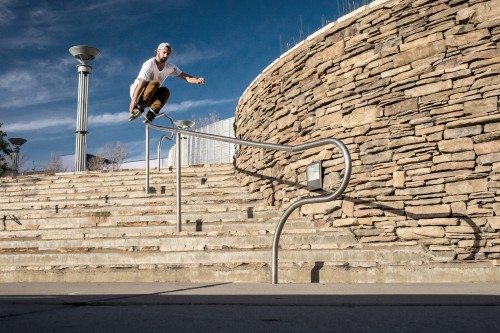 How old were you when you knew you were trying to “fucks” with blading more than just for kicks? Or, what happened first — you wanted to get more from blading or you just started getting more from blading?
I started at 9 and by the time I was 11 the local skate shop (Kerrigan Flame) was sponsoring me. I think it was owned by that ice skater Nancy Kerrigan’s brother — the one from the Tonya Harding leg-breaking Olympic thing. Roces was also hooking me up with mini M12s back then.

What’s the best pay day you ever saw as a pro skater?
Haaaa—! I can’t say that I’ve ever had a good pay day from my professional career of skating. I used to to rely on what little bit my sponsors could supply to live. But that was back when I was living with my parents or in my rental property, so I hardly had any bills. 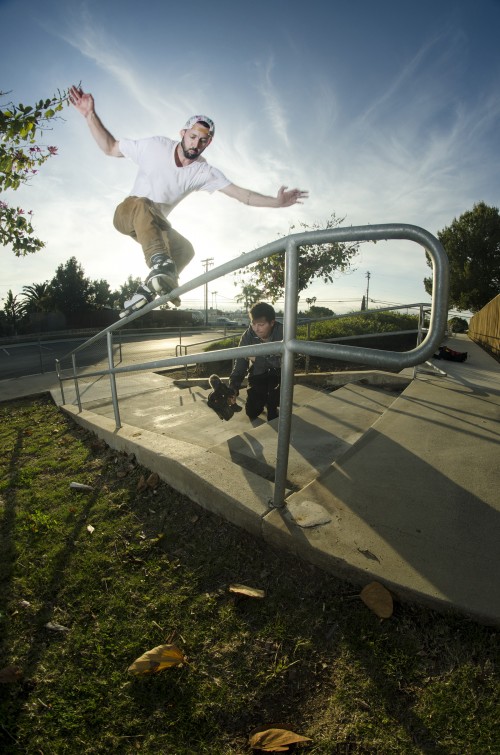 Without incriminating anyone too bad, what’s the most irresponsible party shit you’ve seen go down related to touring or just pros trying to be assholes?
Umm, most of my tours were with Rollerblade and Richie Velasquez, so not too much irresponsible shit went down. I did that month-long tour in Europe with USD, and some of those dudes were trying to act wild but I didn’t really partake so …I didn’t witness too much. Honestly if that was now I’d probably come back with a lot more wild stories.

Having been to skate in a lot of places over the years, with all sorts of people, where is your favorite place to blade? And where have you had the best luck, in case the two locations aren’t the same.
Barcelona was really cool. But my best luck has always been out in Maryland or Cali, just think that’s all based on spots alone!

Who in blading hates you the most and why?
I don’t know if anyone actually hates me. I mean, I don’t think anyone in the actual scene likes me all too much, but I don’t give a fuck. 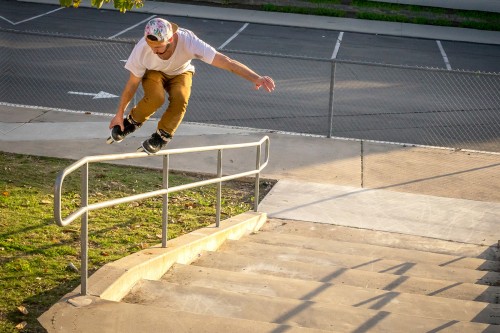 Have you ever gone out of your way to approach someone that’s got beef with you in the hopes of working things out?
Umm, in the “industry” !? No never had to.

What about the other way around? Didn’t you tell me a pretty incredible story about the NYSS this past year? What was that all about?
Okay, well, so if anyone follows me on Instagram or Facebook, you might’ve seen last summer I competed in one of the NYSS comps and skated pretty decently without placing at all.

To me that seemed kinda like it was really biased — or they just simply didn’t like me — which, you know, happens all the time at comps. So I posted my clips online to show everything I’d landed during the comp and let the people talk… and it got a little stirred up.

Then, almost 6-7 months later, I get an email from Adonis (Taylor) saying that after reviewing the footage the event organizers felt I deserved some recognition for actually placing 2nd. They sent me a check for $100 and the only NYSS banner, labeled “2nd Place” and signed by all of them. I appreciate them coming out like that! They totally didn’t have to do because it was in the past already, but either way — RESPECT.

That’s crazy — gotta respect anyone that’ll own up to correcting something they think is wrong. That’s classy. 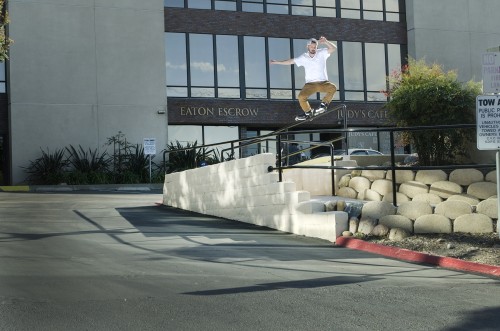 But moving on, let’s say you’re one of the people reading this that wants to skate and live a fun life and pay their bills, but doesn’t have a specialized career path or any specific skills — got any work advice for them? I ask because you’re in a pretty general sort of track yourself that could be beneficial to a lot of bladers…
Well, assuming no one is ruining their lives trying to be pro rollerblader anymore, there’s plenty of jobs out there that pay great with little training. I never went to college because I was busy skating, but luckily I found a decent paying job that was flexible enough for me to continue skating and live a fun life.

Kinda on that same line, if you could go back ten years, slap the Ciroc bottle outta young Jeff D’s mouth and change up the future with some adjustments — what would you do different?
I probably would of started the balancing act of working a real career and being a ”professional skater” at a much younger age… 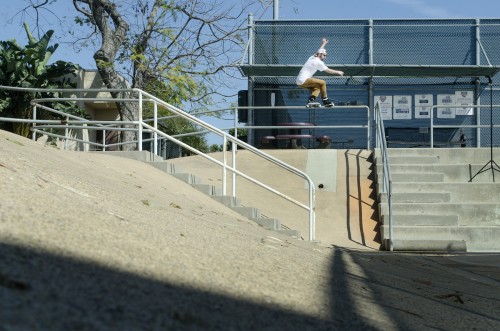 When you were out here we talked about a new edit you’re working on — you start on that yet? I wanna see those tabernacle variations. I think the world does, actually.
Yo, don’t blow up my spot on those new tricks! (Well, for me). Honestly, I haven’t had the chance to get in more then a few hours of blading since I got back. I had to move my schedule around at work to be able to go out to Cali, then I was basically forced to work two weeks straight with no days off. I dipped out on work early a few times to blade at the local parks and my grind box (practicing some new ones there), but not enough time to bust out the camera on streets yet. We’re finally getting nice weather here and I’ve got a three-day weekend coming up, so I’ll get the ball rolling soon on that one.

Anything else we should talk about — wait, I know, Eulogy. They’re one of your good sponsors but we’ve got a rocky past since it’s just kinda hard to swallow the idea of taking money from bladers and putting it in the hands of a company that has done plenty to bash blading over the years. So, tell people a story about why you ride for Eulogy and what you think of the product.
For a “skateboard company” they have by far treated me the best throughout my whole career. Eulogy is owned by Isaac Oltmans who is/was a skater — he cares about the company, and the riders. I don’t see how anyone could be upset with a company that has continued to support bladers and make a quality product for us to ride on, while they literally make no profit. From what I’ve heard the skaters make more money than the company. 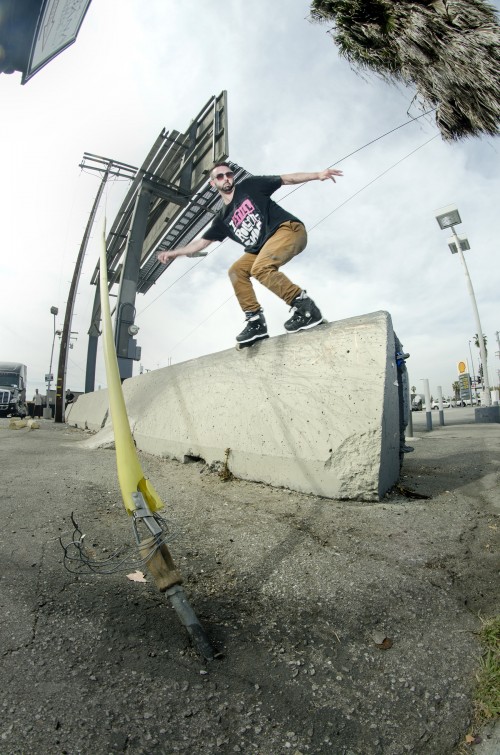 And that’s cool— well, not the company losing money side, but you know what I mean! Commendable! I’d never thought about it like that so thanks for sharing and putting into a different perspective. But anyway, what else is there — anything?
Nah, not that I can think of. Besides, we’ll do another one of these again.

You gonna make an edit with whatever footage you’ve been filming in your area? I’ve been waiting since you got that camera!
I already edited a whole crew edit from 2016. We just never put it out… probably should do that soon.

Okay then in that case get out of here man — we’ll catch up some time soon. Thanks again, always fun to kick it and film.